Albo says “men can’t have babies”, but that’s not what the ALP National Platform says

Albo says “men can’t have babies”, but that’s not what the ALP National Platform says

Anthony Albanese has incensed LGBTIQA+ activists by saying men can’t have babies but don’t believe him when he says he’s not woke.

His declaration comes from the same reservoir of common sense that drives Christian and Muslim schools to have policies keeping males out of girls’ toilets and sports.

Now Albo also stands accused of being an “anti-trans” bigot. 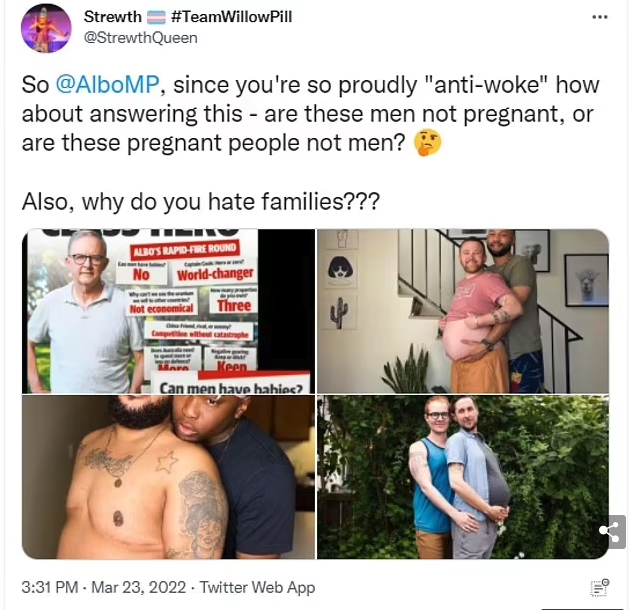 “This is what we mean about politicians pinkwashing. F***ing shameful. This election is going to be so painful.”

@Strewthqueen tweeted a collage of photos of “pregnant men” as if to prove Albo’s transphobia.

“So @AlboMP, if you’re so proudly ‘anti woke’, how about answering this – are these men not pregnant, or are these pregnant people not men? Also, why do you hate families???”

Note the same emotional blackmail used to shut down debate during the 2017 same-sex marriage plebiscite.

But don’t expect Albo to be championing the religious freedom of Christian and Muslim schools any time soon.

Before anyone gets too excited about Albo becoming a born-again social conservative, it’s worth remembering that just a few weeks ago he was soaking up the adulation from the gender fluid crowd at Sydney’s mardi gras.

It’s no wonder they call him “each way”.

The Labor leader’s declaration this week to the Daily Telegraph’s Joe Hildebrand that he is not “woke” and his apparent repudiation of LGBTIQA+ ideology should be taken with a grain of salt.

It does however represent progress in the growing mainstream pushback on rainbow ideology.

But it doesn’t mean religious schools and other dissenters in mainstream Australia are safe from the “human rights” police and the kangaroo courts our governments have established, which Labor in government plans to beef up.

The day political leaders like Albo got wedged by the ridiculous agenda of rainbow politics was always coming.

For Albanese it was in Q and A with Hildebrand.

“Can men have babies?” No, Albanese shot back.

He knew he couldn’t say anything else without looking like a fool to the average Rabbitohs supporter.

Unlike Albo on the election campaign road to Damascus, the 2021 ALP National Platform clearly believes men can have babies.

It would not be requiring a future Labor government to provide information about “reproductive health” to people of “all gender identities” (see page 140, paragraph 3) if it did not.

“Labor commits to ensuring no PBS (Pharmaceutical Benefits Scheme), Medicare or government services will have a discriminatory impact on this (the transgender) community. (Page 140, par 3)

If Albo is trying to present as non-woke to the mums and dads in the suburbs who are concerned about gender fluid indoctrination of their kids at school, he will be hoping they don’t Google what an ALP government will do in office.

The clause about taxpayer-funded sex change operations seemingly includes minors where it refers to “young people”.

“Labor acknowledges the needs and rights of transgender and gender diverse people to fair, equal and affordable access to health care services. For many, this may include accessing vital specialist health services and gender- affirming medical technologies.” (Page 140, par 4).

When Albo says he’s not woke and that he’s mainstream, don’t believe him. He’s of the Labor Left – the same crowd which laced the ALP National Platform with rainbow ideology.

He’s planning to use your taxes to fund “men” having babies and kids having sex change operations.

You can’t get any more woke than that.

Lyle Shelton is a commentator and political activist. You can order his book I Kid You Not – Notes From 20 Years in the Trenches of the Culture Wars here.