China alone will exceed the UN’s global limits on coal emissions, what we do is futile.

Every time I think climate alarmism has driven us to peak stupid, something stupider happens.

Today’s crowds outside the Prime Minister’s Sydney residence, Kirribilli House, demanding he come home from holidays to deal with the “climate crisis” are just nuts. 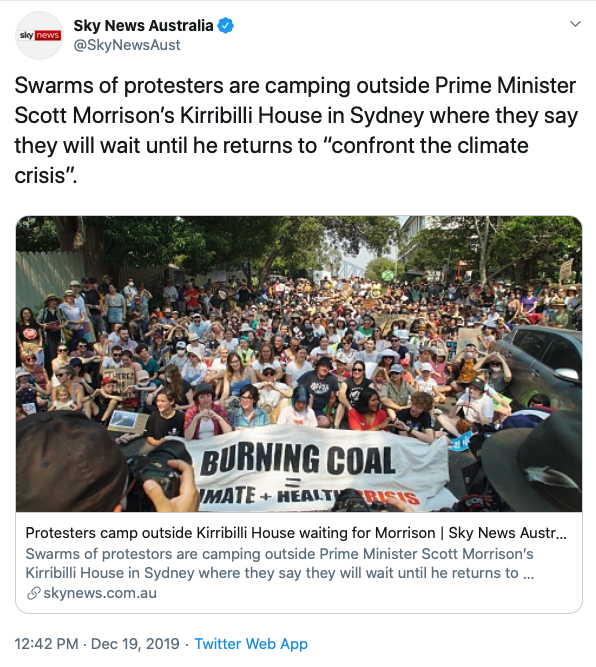 There are no adequate superlatives.

Somehow they think if Scott Morrison ran around and switched off every coal-fired power station in the country the bushfires would stop.

No one has thought about how we’d keep our beer cold without base-load power, but hey, “climate emergency”.

If these people really believed that burning coal was causing bushfires, they would go and sit outside of the Chinese embassy in Canberra.

China’s coal consumption over the next 30 years will alone eclipse the UN-imposed limits which it says are necessary to stop the planet heating by more than two degrees Celsius by the end of the century.

It does not matter what Australia, with its 1.3 per cent of global emissions (5pc if you count our coal exports) does.

The UN dream of dialling down the temperature of the planet, even if humans could theoretically achieve this, cannot and will not happen.

Climate action policy is a farce and the Chinese know it.

Environmental groups have warned that China alone could exceed a coal power limit set for the entire world by 2035 with 148 gigawatts of coal-fired power plants currently under construction or likely to be revived, the 2020 Climate Change Performance Index found, as the country seeks to power rapidly expanding cities and stimulate economic growth.

As we vandalise our electricity grid by shutting down our coal fired power stations, the Chinese are building them like there’s no tomorrow.

That’s because the Chinese believe there will be a tomorrow for their people. We have lost our way and are unsure of ourselves.

Of course we didn’t hear about China’s coal binge in the reporting of the UN’s Madrid climate summit this week.

It was all about how pariah nations like Australia were not doing enough. The Chinese get a leave pass while we are castigated for nor doing more to cripple our economy.

And this is even before the UN requires us to cull our sheep and cattle herds to stop animal farting from heating the planet. 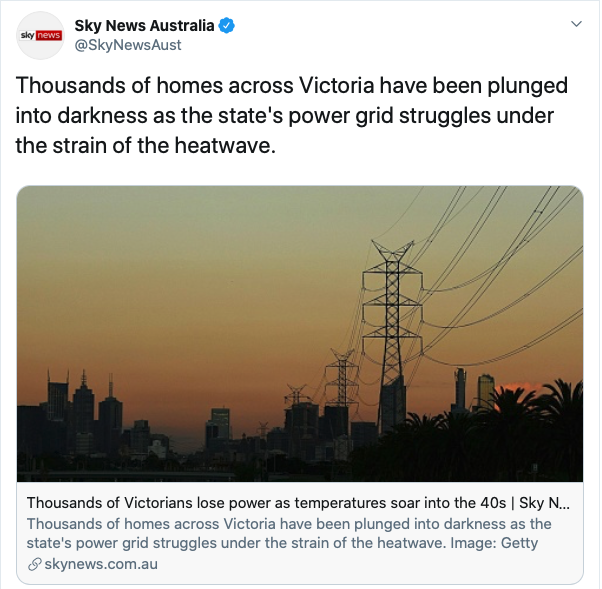 But this and last year’s outage of 200,000 homes and business was predicted by the Australian Energy Market Operator following the closure of the giant Hazelwood coal-fired power station in the LaTrobe Valley.

More blackouts are predicted in the southern states as windmills and solar panels have not been able to replace the base-load power lost through the closure of coal-fired power stations.

Electricity prices have more than doubled in Australia in recent years but our grid has become unstable because wind and solar simply can’t do the job.

He is right to urge this.

But to keep the lights on down south, at least another big coal-fired power station is urgently needed.

Meanwhile the Chinese are making sure their economy can prosper and their citizens can have access to cheap and reliable power.

With Australia’s power grid severely damaged because of “climate action” policies, the Chinese must just laugh when they see protestors outside Scott Morrison’s house demanding more pain for our nation.

The Kirribilli squatters are so blinded by their hatred of a conservative prime minister, they can’t act rationally.

It’s not the so-called climate emergency Australians should be worried about, we have an electricity price and supply emergency.