In a week where the harmful consequences of redefining marriage are starting to hit children and the privacy rights of women, it is timely that the Toowoomba Chronicle has highlighted my comments about the preselection challenge to Turnbull Cabinet minister John McVeigh (full story below).

Two Palasczcuck Government ministers have said the passage of “marriage equality” is the reason why we should have gender bending birth certificates and why unscientific gender fluid teaching must be available in schools.

These of course have been extraordinary declarations because all through last year’s marriage plebiscite the leaders of the Yes campaign said our warnings were false and were “red herrings”.

So it is no wonder that preselectors in McVeigh’s seat of Groom, led by respected businessman Isaac Moody, are holding him to account. 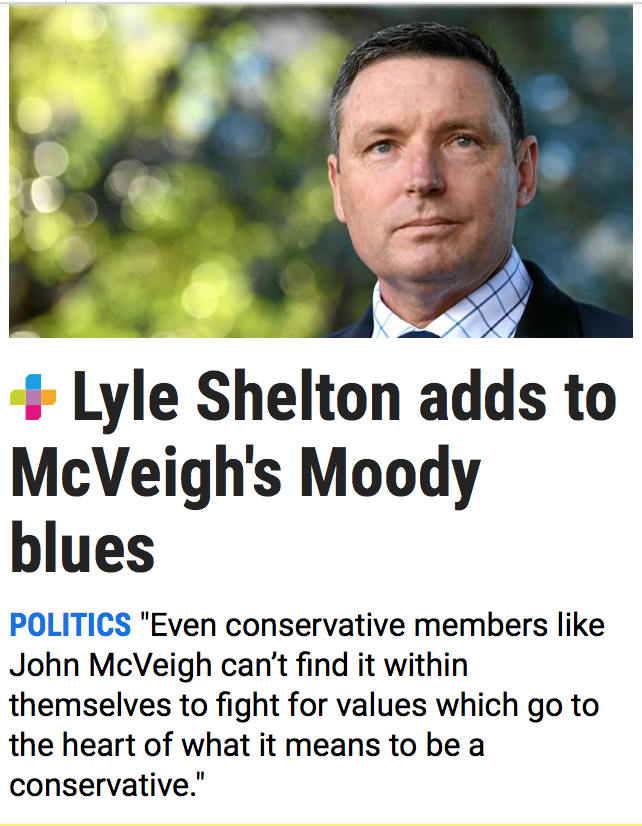 According to media reports, McVeigh told the grassroots members at his preselection that he would support marriage but then voted to redefine it.

That is like saying one thing in a job interview, and then doing another after you get the job.

I get that the Australian people said Yes in the plebiscite. It was not up to conservatives to thwart the will of the people.

But many conservatives opted to abstain when the legislation came to parliament. That way faith was kept with true conservative values and the expectations of their grass roots party members.

But the real issue here is the long drift of the LNP away from the conservative values the party once stood for.

The natural family, freedom of speech, religion, the truth about gender are all things which have been deconstructed since the rainbow political lobby won the plebiscite on the false premise of “no consequences”.

The saddest thing about the past 10 years of relentless advocacy by Greens, Labor and a number of Liberals and Nationals has been the failure of true conservatives to match their public advocacy.

Now we have lost so much and the consequences are biting.  Children are being taught their gender is fluid and women and girls will have accept biological males in their private spaces.

The Toowoomba Chronicle has picked up on my comments in today’s paper.

Mr Shelton, who served on the Toowoomba Regional Council, ran as a Nationals candidate in Toowoomba North and recently left his role as managing director of the Australian Christian Lobby to join Cory Bernardi's Australian Conservatives, made comments via his official website last week taking aim at the squabble within the LNP.

His comments come on the back of a story published by The Chronicle detailing Gabbinbar Homestead business manager Isaac Moody's announcement to challenge federal minister John McVeigh for LNP pre-selection for the seat of Groom.

"It is not every day that a sitting member's pre-selection is challenged, particularly one who is a member of Cabinet," Mr Shelton wrote on his website.

"My concern with the LNP, which is highlighted by this very public rift, is that even conservative members like John McVeigh can't find it within themselves to fight for values which go to the heart of what it means to be a conservative.

"So powerful are the forces within the party that they do not boldly advocate publicly for the things they tell their pre-selectors they believe in.

Mr Shelton then took aim at a perceived silence from Mr McVeigh on the issue.

"Conservative politicians like McVeigh don't seem to understand that their silence and then capitulation have betrayed the conservative values of family, freedom of speech, religion and the rights of children that parties like the LNP once stood for," he wrote.

"I hope the Isaac Moodys of the LNP are successful in dragging the LNP back to its conservative roots. But I suspect that when the Groom pre-selection is held on April 28, it will be Christopher Pyne and Malcolm Turnbull's black hand movement that prevails."

The Liberal National Party was contacted for comment, but previously indicated that the pre-selection process was an internal matter and would not discuss anything publicly.

The Groom pre-selection will be held on April 28. I suspect the anti-conservative forces in the party will prevail. This is why we need a better way.

Case for Covid vaccines for kids is not made

Girls’ surgery driven by culture which should be cancelled