Abortion extremism has reached its high-water mark in Australia. It will be progressively pushed back from here.

If you are an unborn baby girl in New South Wales, look out.

Your politicians voted last night to affirm the practices of poisoning, pureeing you or pulling you apart limb from limb in your mother’s womb for the simple reason that you are the unwanted gender.

The maroon-coloured décor of the NSW upper house of Parliament could well have been a metaphor for the dark red blood of innocent baby girls.

Abortion is a messy business.

Abortion extremism, for the first time out in the open fields of public consciousness, still refuses to take prisoners.

Last night in the Legislative Council, Liberals and Nationals joined with most of Labor and the Greens to vote down an amendment that would have made it illegal for a doctor to perform a sex-selection abortion.

For daring to point out that elements of the Indian and Chinese communities will seek abortion for unwanted baby girls, Upper House MLC Damien Tudehope was called a “racist” by Greens MLC Jenny Leong. 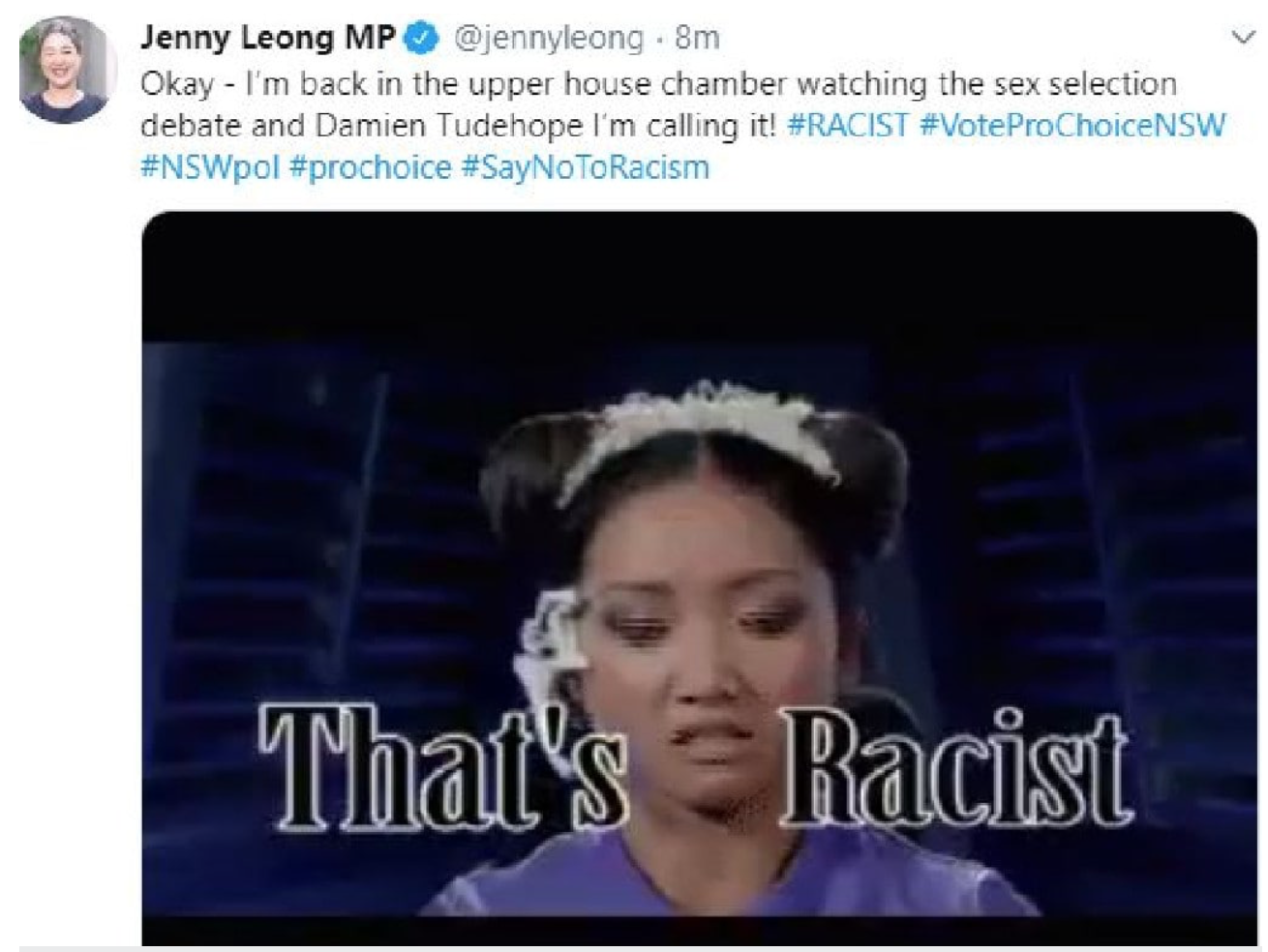 This is so typical of the Left. They will not debate the substance but pivot to a virtue signalling slur.

It is the tactic of someone whose argument is propped up by matchsticks.

It didn’t matter that because of similar abortion laws in Victoria, Dr Mark Hobart was punished for refusing to refer an Indian couple for a sex-selection abortion.

It didn’t matter that it is well known that aspects of Chinese culture prefer boys over girls and will kill to achieve this.

But no. Racist was the cry.

For too long our public discourse has tolerated tactics which deceptively divert debate away from the issue at hand.

European culture is certainly not perfect it has evolved from barbarism to relative civility over the past two millennia through a constant process of self-analysis and deliberate improvement.

I’m sure most Indians and Chinese who have come to Australia for a better life have done so because they are attracted to things they see in our culture which are, dare I say it, superior to aspects of their home culture.

Not killing girls in the womb because they are girls is something I’m sure most Indian and Chinese women who live in Australia think is a good idea.

Politicians, more than most, should know that the law has a role not just to punish evil, but to teach us all what is good and what is not.

Last night NSW politicians said it was okay to kill girls because they are girls.

It was one thing for the extremist Left wing Labor Deputy Premier of Queensland, Jackie Trad, to shepherd similar laws through the Queensland Parliament a year ago.

It is quite another for Liberal Premier Gladys Berejiklian and her Nationals deputy John Barilaro to have collaborated with the extremist green-left independent Alex Greenwich to push this through the NSW parliament.

After achieving similar abortion-to-birth legislation in Victoria, Tasmania, abortion extremists thought NSW would be a walk in the park.

But suddenly there was resistance and the mainstream media actually started talking about the detail of the bill.

That was the worst nightmare of the cross-party cabal of abortion extremists who thought they could rush the bill through in the shadows, as had largely occurred in the other states.

While Australians sadly seem to support abortions earlier in pregnancy, it is clear from polling and public commentary of even pro-choice people that late-term abortion, sex-selection and other odious practices associated with the industry are out of favour.

Abortion extremism has reached its high-water mark in Australia. It will be progressively pushed back from here.