Qld Conservative #11 Why the banks failed, misplaced compassion & how we led the US in killing babies

Adam Smith, the father of modern capitalism, had some sage advice for civilising free markets. If only the banks had listened. Kerryn Phelp's bill to allow doctors into the refugee decision-making process is misplaced compassion. And finally, who would have thought Australia would lead the US in legalising the grisly practice of late-term abortion.

Why the banks failed

During the 1980s the Movie Wall Street captured the imagination of people in free market economies.

Fast forward three decades and Australia’s bankers find themselves shamed for being greedy and millions of ordinary Australians have been ripped off.

The public release yesterday of the Hayne Royal Commission into Australia’s banking and financial services sector has recommend criminal charges and found a culture of arrogance and disregard for people like you and me stemming from the highest levels.

Wall Street the movie was supposed to be a wake-up call but it wasn’t.

Bankers went on their merry greedy way and here in Australia they took on more of the American-style culture of greed.

Now I of course believe in free markets but freedom only flourishes when those who participate in free institutions can first govern themselves.

Adam Smith, who wrote the Wealth of Nations, and is seen as the father of capitalism, knew this.

What is less known about Smith is that he believed in that very unfashionable idea called morality. His other great work was called the Theory of Moral Sentiments.

In it he railed against capitalism’s support for the trade in African slaves and called for equality for women.

And while propounding his belief in free markets he said civil government existed obviously to protect property rights but also to protect the poor against the rich.

The idea that modern capitalism is meant to be dog eat dog, mirroring Darwinian survival of the fittest, is a million miles from what Smith believed.

Today people laugh at the idea that there should be moral sentiments.

That is seen as “moralising” and to “moralise” is perhaps the biggest sin that can be committed in today’s society.

The idea that you have your truth and I’ll have mine, has dominated our thinking these past few decades.

This sort of thinking is of course toxic to the virtues that are needed to sustain a free society and it should surprise no one that even bankers succumb to the temptations of greed and malpractice when no-one is looking.

One of the best definitions of integrity is “who you are when no one is looking”.

We have seen so many failures of institutions in recent years with scandal after scandal rocking the public’s confidence in leaders.

Whether it is horrific and despicable child sexual abuse in the church, politicians letting us down, our cricketers cheating and now the financial sector in disgrace, a massive trust re-building project is needed in modern Australia.

We actually need institutions of integrity. Society can’t function without them.

Trust desperately needs to be restored in politics, the banks, the church and sport.

You can have all the laws and regulations you like but if at the end of the day leaders won’t do what is right when no one is looking and insist on this culture in their organisations, then we will be back at square one.

Legislation and regulation can only go so far. Virtue and character come from the heart and need to be cultivated.

We can’t legislate away selfishness and greed. But by cultivating what Adam Smith called “moral sentiments”, we might just be able to preserve a free and just society.

The Morrison Government is in a terrible pickle over refugee policy.

With still 1000 adults, mainly men, on Manus and Naru, the newly minted so-called independents on the cross-bench are pushing to dilute the government’s control over who comes into our country.

Dr Kerryn Phelps, the member for Malcom Turnbull’s old seat of Wentworth, is leading the charge to give doctors a greater say.

It started with a push to get the kids off Naru, something the government has achieved over the summer break.

The unacceptably long period of time it takes re-settle people who have tried to enter Australia illegally by boat has played in to the hands of those who never believed in having strong borders in the first place.

The government’s fast-tracking of getting kids off Naru to avoid a defeat in a vote on the floor of the parliament looks cynical and that is because it is.

They should have moved much earlier because they handed a gift to those whose real agenda is a form of open borders in the pursuit of what I believe is misplaced compassion.

Phelps, the Greens, many in Labor and of course former Liberals like Julia Banks, use our tough border protection measures as a weapon to – in their eyes – prove that Australians are cruel and immoral when it comes to asylum seekers.

With the kids issue now resolved, Phelps has been clever and has now shifted the focus to people who might be unwell and the need for doctors to have a greater say.

She says the immigration minister will still have the final say but of course incredible pressure will come on any minister who seeks to override what a panel of doctors might say.

The government is rightly concerned that some unscrupulous asylum seekers will seek to exploit this softening of position to secure passage to Australia.

Once here, human rights lawyers help them access our legal system and they end up being able to stay in Australia.

A medical condition becomes a passport to breaching our border.

Dr Phelps says people will be sent back to Naru or Manus after medical treatment but that seems unlikely, given the way activists work to keep people here.

Illegal immigrants end up being rewarded for engaging people smugglers, they are rewarded for being able to jump the que, leaving tens of millions of refugees to languish in camps.

These are the people who cannot afford airfares to Indonesia and the ten to fifteen thousand US dollars needed to pay smugglers.

This of course sends a message to the smuggling trade and the boats start and the drownings of men, women and children start again.

Providing medical treatment on Naru or Manus is obviously a challenge and there is no evidence that the government was not seeking to meet this challenge with compassion.

A bill from Kerryn Phelps was not necessary for there to be medical transfers to Australia when necessary. Indeed, this has been routine.

No one would claim that the government’s arrangements are perfect but this is an extraordinarily difficult policy area.

It has taken more than a decade and billions of dollars of taxpayers’ money to stop the boats, stop the drownings and re-settle people.

If anyone wants to moralise, that past deadly failure is where the focus should be.

By all means keep the government accountable for the humane treatment of asylum seekers but with the issues largely resolved or well on the way to being resolved, the current political posturing is just that – posturing.

Let’s face it. The Left have always opposed offshore processing and have always worked to undermine the idea of strong borders.

Whether it is opposing a wall on the Mexican border, Brexit, or boat turn-backs in the Indian Ocean, the Left’s real agenda is the free movement of people.

Suffer the children (and the mothers)

It’s not often that Australia leads the United States.

But on the grisly issue of legalising abortion-to-birth, we have done just that.

Last week in the State of New York, the Democrat-controlled legislature took a leaf out of Queensland Deputy Premier Jackie Trad’s book and legislated that abortion for any reason was legal up until birth.

And in Virginia, where the same issue was being debated, the Governor there, Ralph Northam, said if a baby was born alive after a botched abortion – something that also happens here in Australia – that baby could be left to die if the mother and doctor agreed.

That folks is infanticide. My friend the Western Australian Liberal Upper House MP Nick Goiran has done a lot to expose this practice but politicians just put their fingers in their ears and avert their eyes.

But it wasn’t just Queensland last October legislating abortion-to-birth. Victoria first did this in 2008 followed by Tasmania.

Labor in NSW is desperate to follow suit but have been thwarted so far by the good work of pro-life activists.

So it was with some bemusement that I watched my American friends on social media expressing their utter disbelief at the idea of abortion-to-birth.

Now what many Australians don’t realise is that this is now part of the legislative routine in Australia and the pro-abortion movement is working hard to fill in the gaps in the States and countries that are yet to legislate abortion to birth.

To our enduring shame, few voices were raised in opposition when this happened here.

Now, it’s almost like the pro-abortion movement is coordinated globally.

The legal measures for these bills are almost identical and are designed to provide maximum freedom to the abortion industry.

Many doctors would say there is never a medical reason for an abortion.

If a baby is so badly deformed that she or he is likely to die, pro-life doctors say the baby should be allowed to be delivered, given all the medical care and parental love possible before the baby dies.

Surely that is more humane than a lethal injection and then inducing labour and requiring midwives to deliver a deliver a dead baby.

Midwives chose their profession because they love babies and want to support mothers in the birth process.

Most did not sign on to clean up after abortionists.

Well if that is the case, why didn’t they build into their laws carve outs that protect healthy babies with healthy mothers?

Why did they not impose any limits?

This is of course an extreme agenda and it is global.

In a grotesque act, the Freedom Tower in New York city was lit purple in celebration of the new abortion-to-birth laws. 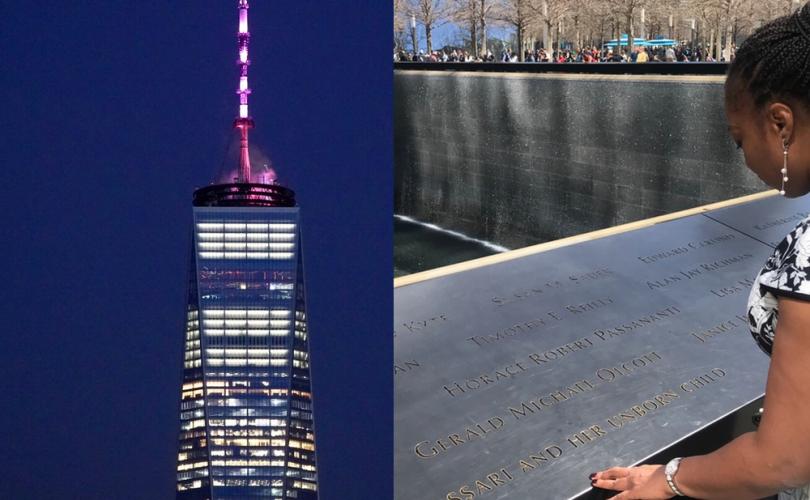 But if you think this is something for the only in America file, think again.

Jackie Trad had the Victoria Bridge across the Brisbane River lit in – you guessed it – purple. 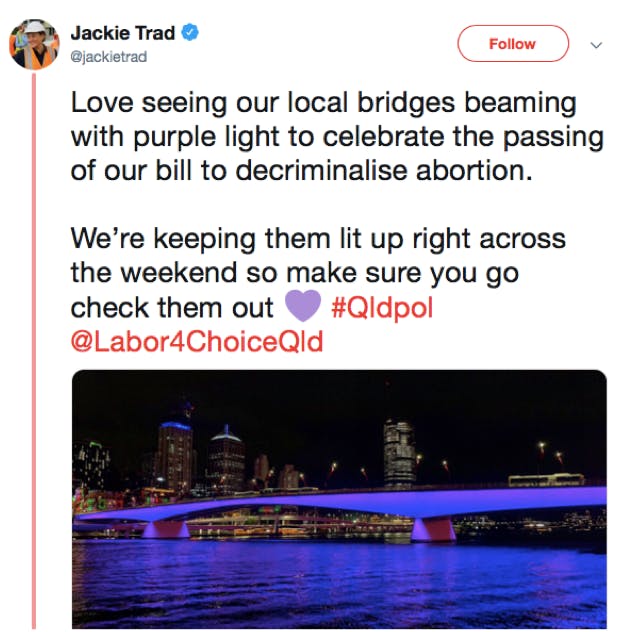 The colour blood red would have been more appropriate.