“It is time to heed the Constitution and return the issue of abortion to the people’s elected representatives.” - Justice Samuel Alito

Abortion policy in America is about to become the same as in Australia.

Yesterday’s leak and subsequent confirmation that the Supreme Court of the United States (SCOTUS) is about to overturn the 1973 Roe v Wade judgement means abortion goes back to the people.

That’s exactly as it is here but you wouldn’t know it from the wailing and gnashing of teeth from the radical Left.

For anyone who believes in democracy, the decision should not be controversial.

Yet Left wing politicians like former Presidential contender and Massachusetts Democratic senator Elizabeth Warren are in melt down.

“I am angry, upset and determined,” she thundered.

But all the ruling means is that US state legislatures will have the same power as state parliaments in Australia to decide yes or no to abortion.

Declaring the law was “egregiously wrong” from the start, Justice Samuel Alito wrote: “It is time to heed the Constitution and return the issue of abortion to the people’s elected representatives.”

But unlike Australia – and this is why the Left has its hair on fire - up to 27 states will act on the restoration of their freedom and legislate to protect human life in their mother’s womb.

Politicians in these states will vote this way because they know protecting unborn babies and ending the coercion of their mothers is a vote winner. Who knew?

The radical Left can’t stand the idea of abortion policy being determined by the peoples’ representatives, they prefer unelected Democrat-appointed judges to impose the law.

But anyone who thinks the earthquake that is the overturning of Roe will reverberate much in Australia is dreaming.

We have a lot more work to do to build consensus for the protection of unborn children and a better deal for their mothers.

Since 2008, almost every Australian state parliament has voted to allow abortion all the way to birth with virtually no questions asked.

Our laws are so extreme we even allow sex-selection abortion to weed out unborn baby girls and there are almost no protections for women coerced by men to kill their babies.

The latest states to join the abortion-to-birth club were New South Wales (2020) and South Australia (2021), both under Liberal premiers.

Our Christian Prime Minister Scott Morrison supports abortion, to the genuine shock and horror of a constituency which is overwhelmingly pro-life.

Access to pregnancy termination services in Australia is the responsibility of states and territories and subject to their respective legislation. This access is an important element of the reproductive and sexual health services the Commonwealth government supports for Australian women, and we continue to work with the states and territories on the availability of safe and legal abortions Australia-wide.

We are committed to protecting and promoting the sexual and reproductive health and rights of women and girls. I am proud that Australia is globally recognised in this space – it is a core part of our foreign policy and aid program, and we advocate on these issues in international fora.

Christensen publicly released this correspondence at the annual Cherish Life march for life in Brisbane at the weekend. 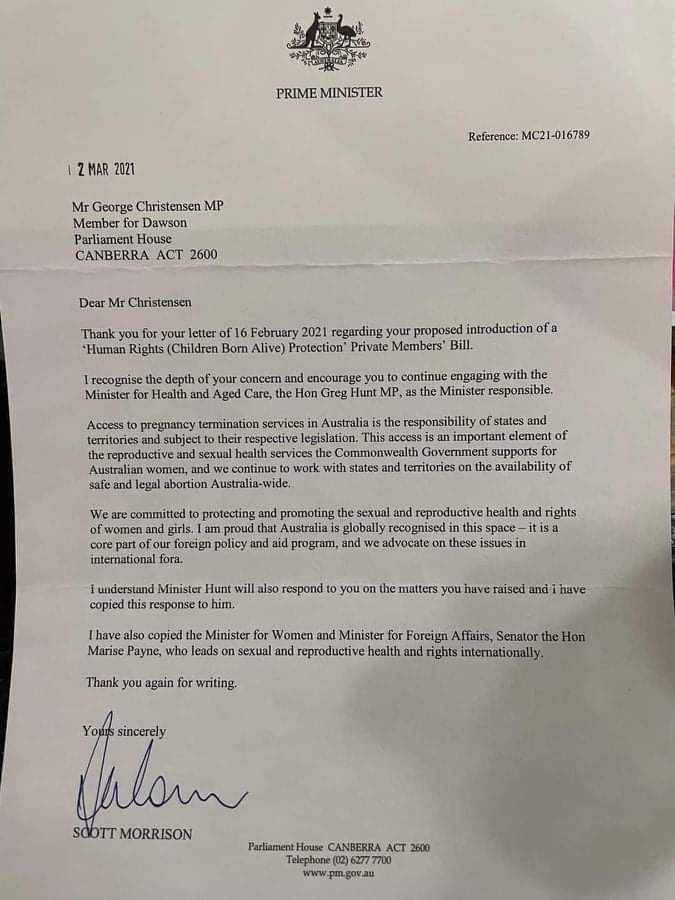 Unlike the US, abortion policy in Australia is locked down by democratic decisions of parliament and its taxpayer-funding is secured with the support of a Christian Liberal Prime Minister.

Australians have shown little appetite to vote out pro-abortion politicians, so the practice continues.

Make no mistake, the overturning of Roe v Wade is arguably the biggest social justice win for the centre right in our lifetimes.

It’s akin to the British Parliament’s abolition of the slave trade in 1808.

In his maiden speech to the Senate, Barnaby Joyce said abortion was the slavery of our times.

Slavery continued in countries like the US until the Civil War in the 1860s and abortion on demand to birth will sadly continue in Australia for the foreseeable future.

But in the global fight for human rights for the unborn, tectonic plates have shifted.

Without former President Donald Trump’s appointment of three conservative judges, this would not have happened.

The saving of millions of babies’ lives will be a lasting legacy of the Trump Presidency.