If Trump loses, it’s lights out for freedom of speech and religion

Many people, even some Christians, don’t believe we are in the midst of a serious freedom of religion and freedom of speech crisis.

With legal action taken against me by two anti-free speech LGBTIQA+ drag queens, I feel it acutely and am under no illusions of how dire things have become.

The leaders of the same-sex marriage “Yes” campaign told Australians there would be “no consequences” for other people’s freedom if marriage was de-gendered. They lied.

The “Yes” vote three years ago has emboldened activists to use lawfare and other means of pressure to stamp out dissent of their views.

It has emboldened a militant transgender movement which, with the backing of new laws, is confusing our children and criminalising parents and health professionals.

Now as voters in the US face a choice between Donald Trump and Joe Biden, commentators are perplexed that a strong majority of faithful Christians will be voting for Trump.

Trump and his vice-president Mike Pence, himself a Christian, are on the side of freedom of speech, conscience and religion.

The Democrats, however, under Biden and his extreme-left running mate Kamala Harris, favour laws which enforce PC speech codes about marriage and gender and want to punish those who dissent.

“The left-liberal political and legal movements have argued that merely to teach traditional Christian doctrine, at school or university, that marriage is between a man and a woman, is to discriminate against gay students,” Sheridan writes.

Faithful Christians know this and feel the pressure from the left.

Christians want to be free to believe and teach their views on marriage, human rights for the unborn and the science of gender not because they are bigots or haters, but because they sincerely hold their views as true.

Australian ABC commentator Julia Baird, herself a professing Christian, has sadly bought into the left’s narrative that Christians and conservatives only want freedom of speech and freedom of religion because they want to be mean to people like young gays or deny medical care to people with whom they disagree.

Baird recently tweeted an excerpt of a speech given by the Democrat Congresswoman from New York, Alexandria Ocasio-Cortez. 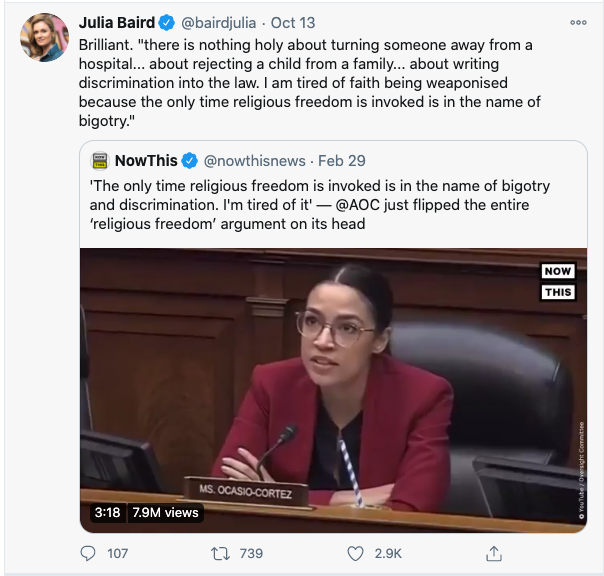 At just 31, AOC, as she is known, is seen as a rising star of the political left in the US and globally.

Here’s her attack on religious freedom given at a congressional hearing last February:

Well, it would be if only it was true.

I’ve been part of the freedom of speech and freedom of religion debate in this nation for more than a decade and I follow closely the debate in the US.

I’ve never heard Christians argue for freedom of religion because they want to do the things AOC so eloquently talks about.

These are lies or at best half-truths.

If a Catholic hospital denying the “medical care” of abortion is “turning someone away from a hospital” in the name of “religious freedom” then AOC is being mischievous at best, pernicious at worst.

Of course a Catholic or Presbyterian hospital should be free to decline to kill unborn babies.

To paint those who favour religious freedom as people who are callous and heartless towards those requiring medical care is a gross distortion of what is sought by those of us who value freedom of religion.

I’ve been a Christian all my life and don’t know anyone who would turn away a child who is experiencing same-sex attraction.

I’m tired of the assertion from the left that because people don’t agree with the redefinition of marriage that they somehow hate gays or want to make life miserable for gay kids.

That is not true of the almost five million Australians who voted “No” in the same-sex marriage plebiscite of 2017.

But I do believe parents should have the right to send their children to a school which upholds their views on sexuality and the science of gender.

Surely we can tolerate diversity?

The left of course don’t and consider this bigotry. They want to punish people who have these views.

When Christians see articulate young Democrats like AOC make persuasive but pernicious speeches like this, they run to Mike Pence and Donald Trump, notwithstanding the many flaws and barnacles of Trump.

Sadly, too many Australian Labor politicians and all of the Greens hold identical views to AOC. More than just Baird at the ABC also hold these views.

That is why Christians and conservatives are worried. And they should be.

The left no longer believe in freedom and want to enforce their monoculture on the rest of us.

That is why people like me are being taken to court.

Make no mistake, the stakes for freedom are incredibly high. That’s why faithful evangelicals and protestants will overwhelmingly vote for Trump.

And they would be right to do so.

A second Trump presidency will be a further reprieve from persecution.

If Trump loses on November 3, every Christian should go and replay the AOC speech Baird tweeted and listen carefully.

Then they should decide how they plan to live out their faith under a government which views them as evil people and ultimately criminals.

Many will compromise, others will go to jail.

Lyle Shelton’s new book, I Kid You Not – Notes From 20 Years In The Trenches Of The Culture Wars (Connor Court), can be purchased here for $35 (includes postage and handling).