With the army aligned with radical rainbow politics, what hope is there for mainstream Australians?

They want to make this normal and call you a bigot if you disagree.

Conservatives and Christians were again firmly in the sights of marchers in Saturday night’s parade as was the Morrison Government.

Mainstream parents who are concerned about their children being taught gender fluid ideology at school, were also in the gun.

Mardi Gras is an aggressive promotor of what it calls “trans rights” and “Safe Schools” which really means taking away parents’ rights.

Drag Queens who whose public sexual antics make them inappropriate role models for children, were also out in force – including Dean Arcuri who regularly reads to impressionable tiny tots in Victoria.

All this then begs the question as to why Australian Defence Force personnel, Australian Federal Police and the ABC are participants.

The ABC had a float for the first time yet claims it needs more than its $1.1 billion a year budget. Labor's entire federal parliamentary leadership team of Anthony Albanese, Kristina Keneally, Penny Wong and Richard Marles marched. 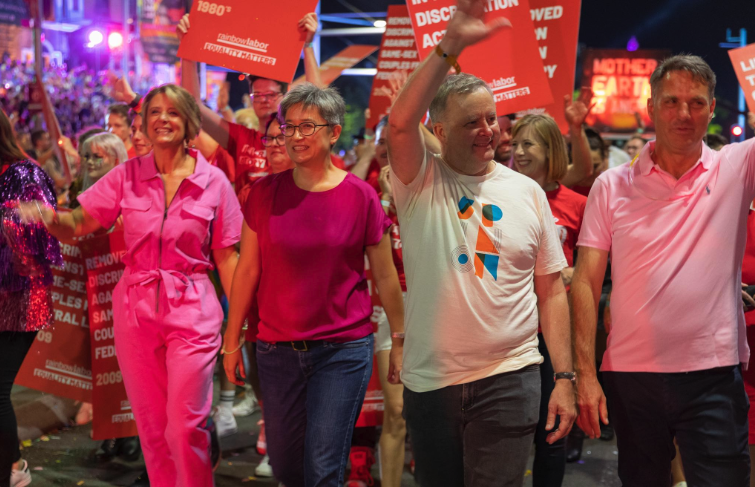 To Scott Morrison's credit, no one from the Government's leadership team participated.

My friend, the former Army Major Bernard Gaynor, was sacked for questioning why military personnel are allowed to march in uniform.

The ADF has strict policies to protect the uniform of Australia’s defence forces being politicised yet that goes out the window for Mardi Gras.

For example, the ADF will not allow uniformed personnel to march in a pro-life march because that would be political.

Supporting the indoctrination of children into gender fluid ideology is fine, but upholding the human rights of unborn babies is verboten.

Yet uniformed soldiers can line up with bare bummed sexual expressionists and left-wing radicals trashing mainstream Australians and the elected government they are duty-bound to serve.

The Government’s religious discrimination bill, which is designed to balance the freedom ledger in the wake of same-sex marriage, came in for special attention at the parade.

LGBTIQA+ activists vehemently oppose it because they want to keep newly weaponised anti-discrimination law in place to shut down people of faith or no faith who might publicly promote man-woman marriage and family.

They want to be able to stop religious schools from positively discriminating in favour of staff who share their ethos.

The Sydney Morning Herald asked parade participant Jane Marsden, who marched as part of "A Cock in a Sock in a Shock Jock" float for her views on the Religious Discrimination Bill.

"It is designed for conservative right wing Christians with tools to exclude LGBTQI people from healthcare and education," she said. "That’s why it’s a worry."

This is of course false but don’t expect “our ABC” to investigate the claims of rainbow political activists any time soon.

With our army, federal policy and taxpayer funded broadcaster aligned with the politics of the radical rainbow left, what hope have mainstream Australians got?