To be a mother is the greatest gift in the world. - Leila Abdallah

After 25 years, Bernardo’s announced in February it was pulling out saying “Mother of the Year” did not reflect all families.

The idea that society would now champion motherless families creates a profound injustice to babies and children.

So good on Family Voice for picking up the awards because everyone knows mothers are not mere “chestfeeders” or “birthing parents”, as rainbow political activists are trying to coerce us into believing.

But back to the beauty of motherhood. 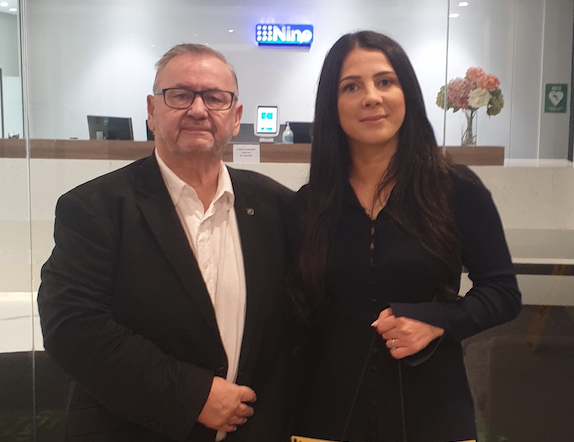 There is no more deserving recipient than this year’s winner Leila Abdallah (pictured above with Family Voice's Greg Bondar) who lost three of her six children when a drunk driver ploughed at high speed into a group of seven children walking to the shops for ice cream in February 2020.

Yesterday I had the opportunity, along with CDP vice-president Silvana Nile and state director Annie Wright, to attend the award ceremony luncheon at the magnificent Deckhouse Restaurant at Woolwich on Sydney Harbour.

Leila and her husband Daniel lost son Antony, 13 and daughters Angelina, 12, and Sienna, eight in the tragedy.

A fourth child, their cousin Veronique Sakr, 11, was also killed. Her mother Bridgette and fiancé Craig were also at the luncheon and their suffering and bravery was rightly acknowledged.

The room was full of the Abdallah’s tight-knit Maronite Catholic community, who hail originally from Lebanon and whose Christian tradition is among the most ancient.

Leila and Daniel amazed and inspired the nation when they chose to unconditionally forgive the driver of the vehicle, who was later sentenced to 21 years jail for manslaughter.

Speaking at the lunch yesterday, Leila  said: “I want to dedicate this award to all mothers going through suffering in their lives, especially my mother. (We) are resilient, no matter how much hardship we experience in life. We are all a leader in our families, we are all powerful and influential … to be a mother is the greatest gift in the world.”

Family Voice NSW director Greg Bondar said: “We chose Leila after her unprecedented suffering through the loss of her children and her strength ... afterwards.”

Well done Family Voice and may there be many more Mothers of the Year.