ANOTHER Question on Notice to the Health Minister. Another non-answer.

The unwillingness to engage serious questions about experimenting on children is a worry.

This week the Reverend Honourable Fred Nile was again fobbed off by the New South Wales Health Minister, Brad Hazzard, and his representative in the Upper House, Nationals MLC Bronnie Taylor.

It all started with a Question on Notice (scroll to 5627) from Rev Nile to the Minister asking him why he was silent when local and international medical experts were expressing concern about treating gender confused children with irreversible puberty blockers, cross sex hormones and body-mutilating surgery. 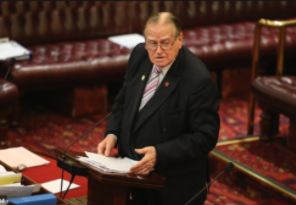 Hazzard’s written reply on June 2 was:

“The New South Wales Government supports practice that is consistent with advice from the Royal Australasian College of Physicians on care and treatment for children and adolescents with gender dysphoria.”

Hazzard had also repeatedly refused to respond to media inquiries about experts’ growing concerns relating to these experimental gender treatments on children.

The Christian Democratic Party’s Rev Nile then raised the same question in Parliament on June 10 with an obvious follow-on question.

“What contingencies has the Government made to pay potential future compensation claims to people who later regret taking Government‑sanctioned childhood medical advice to have irreversible body and life-altering therapies performed on them?”

Taylor, representing Hazzard in the Upper House, rose to her feet, waffled and fudged for a minute or two before finally saying: “I very much thank the honourable member for his question and I hope I have provided him with the detail he required. If the member wants me to take any matter on notice, I am happy to do so”.

Having agreed to take the question of who compensates children who later regret that their childhood gender transition made them infertile or missing important body parts on notice, Taylor responded this week with the following:

Now that’s code for “I’m irritated by you, go and look at my original answer”.

The only trouble with that, apart from her irritation, is that the original answer on June 10 was of course a non-answer.

Despite Rev Nile’s persistent questioning, we still don’t know why the minister is silent in the face of media inquiries asking why the experts are worried.

We still don’t know the answer to the question of compensation for people who later regret their childhood gender transition.

Your CDP will not let this matter lie. This is a matter of child safety, and it would appear the NSW Government is treating child safety with callous disregard.

The CDB is drafting a bill to ban experimental gender treatments on children.