Colbeck walks back support for gender fluid guidelines in sport

Colbeck walks back support of gender fluid guidelines in sport

After initially publicly backing gender-fluid guidelines for women’s and girls’ sport, Sports Minister Richard Colbeck is now walking this back.

Media reports soon after last year’s election had the Morrison Government minister backing guidelines released by the Australian Human Rights Commission which trample women’s and girls’ human rights to privacy and fairness as they participate in sports. 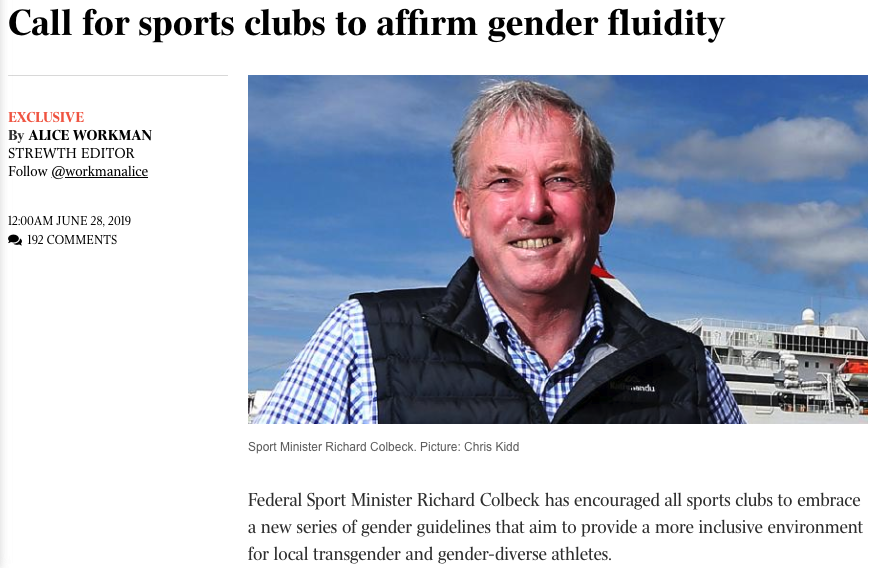 “We want more Australians getting involved in sport no matter their gender or background,” Senator Colbeck told The Australian newspaper at the time.

The commission’s guidelines, which cost taxpayers $20,000, recommend that boys and men identifying as females be allowed to use female change rooms and compete against them.

Senator Colbeck's apparent public support for the guidelines may have been the case of a relatively new minister being verballed by the gender theory radicals at the commission.

Because a year later, in a welcome move, he is now having none of it.

The Australian reported that he said he “knew nothing” about the commission’s gender fluid guidelines until he took the sports portfolio after the May 2019 election.

He stressed that the guidelines were not launched by the government.

“While generally the government wants to see all Australians have the opportunity to participate in sport, it is important that the integrity of women’s sport is maintained,” he told The Australian.

This should have been his line in June last year but the bureaucrats probably pulled the wool over his eyes. It happens.

In a Monty Python-esque display, Sport Australia officials were ducking and weaving at a recent Senate hearing when asked to explain the impacts of biological males identifying as female mixing it with the girls.

Seriously? How hard is it to answer that?

In a subsequent letter to Dalton, Senator Chandler tore strips of him saying the issue of allowing males who identified as females to compete with women had “major implications for women and girls and their engagement in sport.”

Senator Chandler is right and she is to be commended for her courage in raising this issue at a time when bureaucrats everywhere seem to be walking around in a rainbow fog.

“Minister Colbeck does not agree that the term ‘women’s sport’ should no longer be used.”

I’ve said it before and I’ll say it again. Flattening the coronavirus curve has been easier than preventing the harmful rainbow gender-fluid ideology virus from spreading throughout our society.

What is needed is for the taxpayer-funded Australian Human Rights Commission to be de-commissioned before it completely destroys basic human rights such as free speech and a fair go for women.

And we need more courageous parliamentarians like Senator Chandler.