Could the LGBTIQA+ war on women become an election issue?

Could the LGBTIQA+ war on women become an election issue?

We can only hope.

It was good to see Scott Morrison engage the culture wars on day one of this 40-day election campaign.

He has spent most of his Prime Ministership dodging them.

His candidate for Tony Abbott’s old seat of Warringah is the of co-founder of the Save Women’s Sport organisation, Katherine Deves.

She’s been working to stop biological males, at the behest of LGBTIQA+ political lobbyists, from ruining girls’ and women’s sports.

Deves will take on the ultra-woke Zali Steggall who, if journalists were doing their job, would ask her to define “woman”.

That someone has to create an organisation to fight to keep blokes out of girls’ sport shows how insane our world has become.

A media that thinks intelligence is measured by an ability to transcend biology doesn’t get it and tried to paint Morrison as a transphobic bigot.

“She’s standing up for something really important, and that is to ensure that … when it comes to girls playing sport and women playing sport, that they’re playing against people of the same sex.

“I share her views on those topics,” Morrison said on radio when asked about how someone like Deves slipped through the net to become a Liberal candidate.

“We will have more to say about that at another time …”

This last comment was interesting. After allowing his hapless sports minister Richard Colbeck to release, on behalf of his government, transgender guidelines designed to corral girls’ and women’s sporting clubs into allowing biological males to compete against and shower with females, Morrison seems to be mustering courage.

If he was fair-dinkum he’d put Colbeck in front of the cameras tomorrow tearing up the guidelines.

Mainstream Australia would cheer, rainbow political activists and the media would set their hair on fire for a day and the Libs would go on to win the election.

Nonetheless, it’s great to see Morrison backing Deves and Senator Claire Chandler’s private Senator’s bill to save women’s sports, a bill that will likely go nowhere unless the government makes it a government bill.

It’s a shame Morrison couldn’t show a modicum of support to Citipointe Christian College for its enrolment policy designed to keep biological males out of girls’ toilets at school and to save their sports as well.

A large part of the reason Morrison won’t back Citipointe’s Christian enrolment policy is because the backlash from woke rainbow activists is always swift, brutal and amplified by their fellow travellers in the mainstream media.

The truth doesn’t stand a chance. 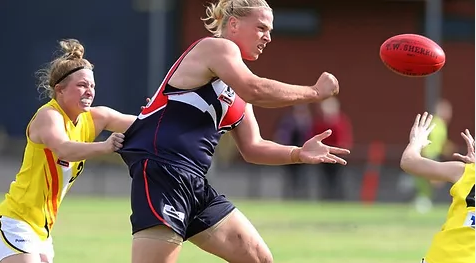 “Scott Morrison has never cared about women before, why is he caring now?” said the biological male who smashed up plenty of women before the AFLW decided it was too dangerous for him to play.

“Of all the concerns women have and are passionate about, this is not one of them,” Mouncey told the Telegraph.

He should repeat this outside the goat cheese circle of Sydney or Melbourne. Mums and Dads in the suburbs want their girls to compete against girls, not boys or men.

Mouncey was referring to the International Olympics Committee’s decision to let biological men identifying as women to compete as last year’s Tokyo games.

“We just want to be allowed to play,” he said, with no hint of concern for what the women who miss out might think as they to make way for men identifying as women.

The Telegraph then brought in Anna Brown, formerly of the 2017 Yes campaign to de-gender marriage.

As a committed rainbow activist, she didn’t lay down her weapons when the Yes campaign won. There were bigger frontiers to move on to like teaching children that gender is fluid.

“The political parties that wish to form government this coming election must commit to governing for all Australians, and to ensuring that every person in Australia can live their life, with dignity and respect, no matter who they are, or whom they love,” Brown said in a comment which has nothing to do with six-foot blokes in skirts smashing girls in netball.

And then the “modern” Liberals joined the pile-on on Morrison and Deves.

For his whole Prime Ministership Morrison has sat back as the rainbow wave rolled through our schools and sporting clubs.

Could Katherine Deves have brought one of the most important issues facing girls and women into the front and centre of what has been shaping up as a Seinfeld election – an election about nothing?

Clearly the Liberal Party doesn’t want to talk about saving women’s sports. Deves’ involvement in this cause, despite her high media profile prior to her pre-selection, is not mentioned on her official candidate website.

Yet it is probably the main issue driving her passion to become a member of Parliament.

If the media was doing its job, it would ask Albanese what he thinks about biological males taking to the paddock with the girls.