Euthanasia and the mainstreaming of suicide

Are wrongful deaths worth the cost of throwing away good ethics?

“They never flinch” was the headline on page one of Saturday’s Weekend Australian.

Euthanasia sounds like this wonderful thing where families say goodbye to a loved one who peacefully passes after drinking or being administered “medication”.

Setting aside that in euthanasia newspeak, poison is “medication”, it seems like it’s Kumbaya all round. What were those noisy Christians, right-to-lifers and furrowed browed ethicists worried about?

Instead of the expected dozen or so people using Victoria’s six-month-old Voluntary Assisted Dying (VAD) laws, it’s been so popular that more than 50 have.

Billed as having the strictest safeguards of any legislation in the world, advocates rubbished any notion that euthanasia was a slippery slope to get it over the line.

“I’m still surprised by how I’ve never seen a person flinch about picking up or taking the drink. They are so committed to it,” oncologist and death doctor Cameron McLaren proudly told The Weekend Australian. 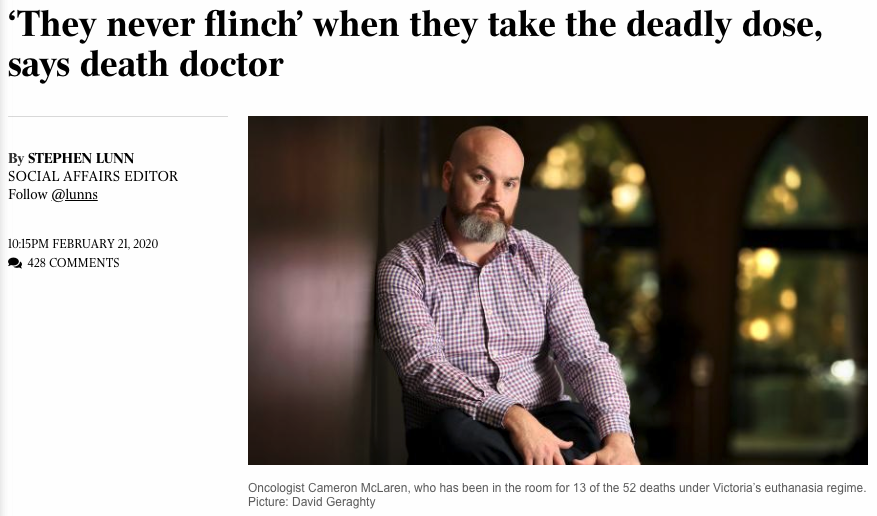 “Even with the best palliative care in the world, there is still a place for voluntary assisted dying. People want control over the end of their lives,” he said.

And that goes to the nub of the issue.

It’s not about whether or not palliative care can provide people with a pain free and dignified death – as it can in the overwhelming majority of cases. It’s about control.

During my time as a Christian lobbyist I debated Dr Death himself, Philip Nitschke, as well as other luminaries from the various “dying with dignity” organisations.

And McLaren all but said this on page one of The Weekend Australian.

Gullible politicians have been finally worn down by euthanasia advocates, including by celebrities like Andrew Denton, because they have been led to believe it is only about preventing extreme suffering for people who are terminally ill. They are going to die anyway, so why don’t we do what we’d do to a dog and put them down?

How could politicians be so heartless?

The reality, according to palliative care experts who continually front up to parliamentary inquiries and get ignored, is that very few people cannot be made pain free with proper care.

For the tiny number where this is difficult, palliative sedation is effective without causing doctors to cross a line from carers to killers.

Tasmania and Queensland are now actively considering following suit. After decades of politicians saying no on the grounds that euthanasia is not safe, the floodgates have opened.

Even as we were told during the Victorian debate by advocates like Denton that “There. Is. No. Slippery. Slope!”, the grease is now being applied with a trowel.

While the sunny side of euthanasia was on page one of Saturday’s paper, deep within its bowels was what should have been up in lights.

In less than six months of operation, pressure is building to tear down the much vaunted “safeguards” which were so effective in getting nervous Victorian MPs across the line during the 2017 debate.

Despite the killings in the early stages of the legalisation exceeding expectations by almost five-fold, pressure is now building to remove the so-called “gag” where doctors are prohibited from raising the option of euthanasia with a patient.

At present, to avoid the possibility of coercion, the patient must repeatedly initiate the conversation. It would be so much simpler without it but the “gag” is there for good reason. Surely no one wants to see a vulnerable person feel pressured into “requesting” that their life be given up, along with their expensive hospital bed?

But no, euthanasia advocates now say “trust us” and amend the legislation so the “gag” goes.

Surely money hungry family members will never suggest to a doctor that they might like to “suggest” to granny that euthanasia is an option.

The laws are too new and don’t allow the recording of the sort of information that would indicate whether or not granny was pushed. How convenient. Death certificates even have to be fabricated to record that the relevant disease, not euthanasia poison, was the cause of death.

Sounds like a dream for anyone wanting to cover up...murder.

The WA legislation didn’t even bother with the “gag” that was seen as such an important “safeguard” back in 2017 when the matter was before the Victorian Parliament.

And in Tasmania, with the pioneering done by Victoria and WA, the bill before hapless Tasmanian pollies does not even require that someone be terminally ill.

Wow, it didn’t take long for that domino to fall.

As I said, I worked out years ago when I saw the whites of the eyes of Nitschke and his compatriots, that suicide on demand was their true aim.

If it was pain relief, they would not have had to look past palliative care for the overwhelming majority of people.

And in Tasmania, they are careering recklessly down the slope paved by Belgium and Holland by proposing that we too euthanise children.

In Belgium they have even begun euthanising the mentally ill, something that made even the liberal Washington Post do a double take. It won’t be long before we do that here too.

But hey, There Is No Slippery Slope! I hear Andrew Denton whispering into the ears of politicians.

You see, it’s really about suicide on demand. That’s the answer to all forms of pain, according to euthanasia ideology. It’s an ideology of radical autonomy. Suicidal ideology makes someone spurn the love of a family member, a friend or the care of a competent medical professional in favour of taking matters into their own hands. Vulnerability is weakness, autonomy is dignity. Apparently.

So much for Beyond Blue and Lifeline trying to coax people towards hope. Our culture is telling the young and the old that suicide is the answer to physical or emotional pain. That’s not going to end well.

Instead of governments funding our rolling state-based public health crises, euthanasia provides them with a cheaper way out. It’s an economic rationalist’s dream.

A nervous Queensland Premier, Annastacia Palaszczuk, is being pressured by her radical left flank into legislation for euthanasia in this election year.

She’s already delayed the release of a parliamentary inquiry, perhaps in the hope she can put it off until after the election.

She was squeamish about her deputy premier Jackie Trad’s abortion-to-birth law and told her not to hold a party to celebrate.

Trad defied her and held a knees-up at a swank West End bar to celebrate... baby killing. What further hubris would we see if more death laws were passed?

“No one should have to suffer a bad death in the name of good ethics,” he said.

What he doesn’t realise is that even one wrongful death is not worth the risk of bad ethics.