"...they exchanged the truth about God for a lie and worshiped and served the creature rather than the Creator." - Paul of Tarsus

A member of the Finnish Parliament, Paivi Rasanen, went on trial in Helsinki yesterday for posting the Apostle Paul’s words about homosexual sex acts on Twitter.

Therefore God gave them up in the lusts of their hearts to impurity, to the dishonouring of their bodies among themselves, because they exchanged the truth about God for a lie and worshiped and served the creature rather than the Creator, who is blessed forever! Amen. For this reason God gave them up to dishonourable passions. For their women exchanged natural relations for those that are contrary to nature; and the men likewise gave up natural relations with women and were consumed with passion for one another, men committing shameless acts with men and receiving in themselves the due penalty for their error. - Romans 1:24-27 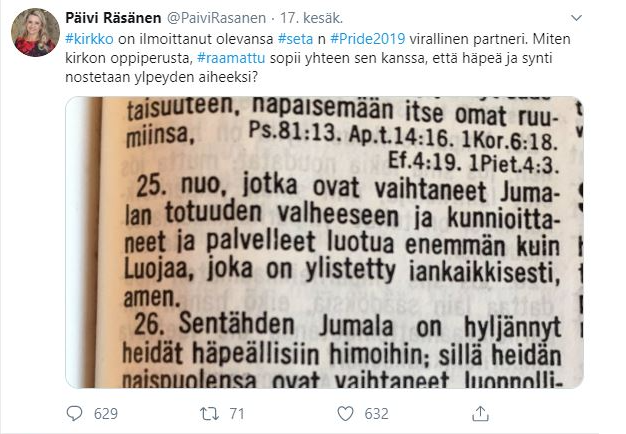 The former government minister and leader of a Christian political party spent six hours in court with her co-accused, a Lutheran Bishop.

The pair are charged with the crime of “ethnic agitation”, under the section of “war crimes and crimes against humanity” in the Finnish criminal code.

The case puts the Bible itself on trial.

The book that more than any other created the West, may be cancelled by a Western court. At very least, the parts of the Bible rainbow activists don’t like might be cancelled.

Speaking ahead of the trial, the mother of five and grandmother said:

In a free society, everyone should be allowed to share their beliefs without fear of censorship. This is the foundation of every free and democratic society. Criminalizing speech through so-called ‘hate-speech’ laws shuts down important public debates and poses a grave threat to our democracies. These sorts of cases create a culture of fear and censorship and are becoming all too common throughout Europe. We hope and trust the Helsinki District Court will uphold the fundamental right to freedom of speech and acquit Päivi Räsänen of these outrageous charges.

These are serious times for Christians. Up until about five minutes ago in history, Western culture agreed with Christianity that homosexual acts were not a pathway to human flourishing.

Legitimate arguments can be made about the poor treatment of same sex attracted people in the past and I do not seek to defend that.

(Although in my decades of involvement with the Christian community in Australia, kindness and respect has always been shown to same sex attracted people, and that is very much the culture of the modern church, despite our disagreement over acceptable practice).

What is clear is that while the Bible contains ethical prohibitions on a range of behaviours, its central ethic of love is fully fleshed out by the New Testament.

Sadly, intolerant elements in our secular society are seeking to destroy Christianity and its place in the public square.

The new “anything goes” sexual ethic sees sexuality tied up with identity and therefore any ethical prohibition is seen as an affront and even harmful to an individual and identity group.

The rainbow political movement more than any other is being used by cultural Marxists to achieve their long-held goal of destroying Christianity and the family.

The BBC reports: “the charges against Ms Rasanen could technically lead to a prison sentence, (but) prosecutors have asked that she receive a fine relative to her income”.

The choice for faithful Christians will be either the capitulation route taken by the Lutheran Church of Finland or the path of principle for the truth of human biology, reproduction and family by standing with the Bible.

What happens in a Helsinki court room over coming weeks will sharpen the minds of Christians around the world.

The court is adjourned until February 14.