Christians – The Urgent Case for Jesus in Our World by Greg Sheridan is published by Allen and Unwin.

It’s unusual for someone with such secular street cred to be making the case that our world urgently needs Jesus.

Sure Greg Sheridan, The Australian newspaper’s distinguished foreign editor, is a practising Catholic, but that is not what he is known for.

At the back end of a stellar career, he has penned two books aimed at helping the uninitiated better understand their cultural heritage and the initiated not lose hope.

Good is Good For You – A Defence of Christianity in Troubled Times appeared in 2018 and provides a broad sweep of what Christians believe and how this has shaped Australia and the West.

Sheridan’s latest offering, Christians – The Urgent Case for Jesus in Our World survey’s the New Testament Gospels and Paul, while again using his journalistic skill to illuminate unsung and sung contemporary heroes of the faith. 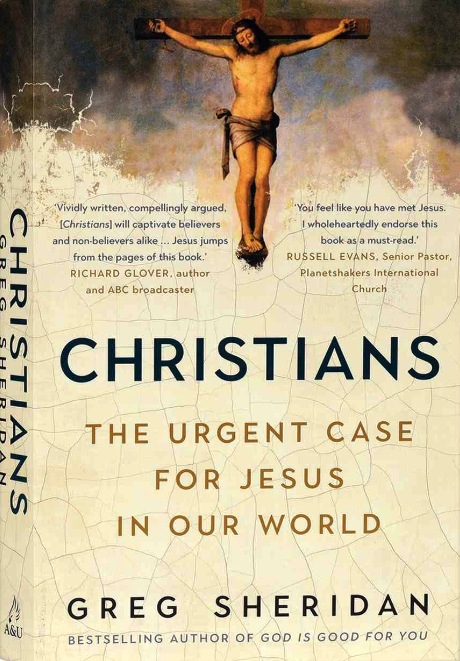 St Jude is the Catholic patron saint of hopeless causes and perhaps this is the only explanation why Sheridan would take on such a project.

But as one of Sheridan’s subjects, Nicky Gumbel reminds him, history shows that Christianity has always experienced ebbs and flows.

London in 1750 had 10,000 prostituted women on the streets while just 17 people attended St Paul’s Cathedral at Easter.

But then along came the Wesleys and William Wilberforce.

Rumours of Christianity’s death have always been greatly exaggerated.

Sheridan gleans from the best apologists, historians and theologians to make the case that Jesus was real and that the writers of the Gospels were eyewitnesses who were not lying.

He shreds once and for all the scholarship of the past 200 years which has cast doubt on the historicity of Christianity’s origins.

The Apostle Paul comes alive as the rugged, intellectual, compassionate and dogged founder of Christianity whom Sheridan provocatively compares with Lenin.

Both were revolutionaries but that of course is where any similarity with the 20th century murderer ends.

Chapters on Mary and the role of angelic beings pleasantly surprise.

While the historical evidence of Jesus and the early Christians is solid, Sheridan doesn’t expect the reader to accept the miracles but writes beautifully about this aspect of the faith, nonetheless.

It can’t be denied that innumerable followers of Jesus went to cruel deaths because they also believed in the supernatural.

A profile on the late-in-life conversion of former Labor leader and Governor General Bill Hayden is touching.

“I couldn’t bear the emptiness,” the man who spent most of his life as a committed atheist says.

Most inspiring, in my view, is former deputy prime minister John Anderson.

“You learn something of a man from the way he speaks of his wife,” Sheridan observes of Anderson’s love for Julia – surely a portrait of a Christian marriage.

While Christianity wanes in the West, it’s boomed under the evil Chinese Communist Party from just two million followers in 1949 to between 70 and 100 million today.

Who knew of pastor Wang Yi, a dynamic leader who built a large following and even spoke out against abortion in a country where the state forced them?

CCP dictator Xi Jinping has cracked down on churches and now forces them to promote and spread CCP doctrines. They must hang his picture in their sanctuaries as a reminder of who he thinks is god in China.

We need to know more of the courageous Christians of China and Sheridan gives us a glimpse.

While in no way absolving the church for its heinous sin of child sexual abuse, the book points out that it can’t be denied that the overwhelming number of offending priests were in seminary during the sexual revolution.

Again, this is no excuse, but it is also true evil does not arise in a vacuum.

Surely the #MeToo movement and our epidemic of sexual and domestic violence against women is secular society’s own reckoning with the 1960s.

Sheridan brings a lifetime immersed in foreign affairs and therefore other cultures, politics and history to this work.

He also brings a staggering breadth of reading of theology and apologetics and of course of the scriptures themselves.

Whether one is new to Christianity or an old-timer like me needing a refresh, Christians does not disappoint.

And Sheridan is right – the case for Jesus in our crazy mixed-up world is urgent because, as he writes, “the West is a culture willing itself into amnesia and ignorance”.