How do we flatten the debt curve?

“Governments don’t have dollars, only taxpayers do and the hangover from this crisis will have to be addressed and it’s going to be a very difficult hangover indeed.” – Former Deputy Prime Minister John Anderson.

Encouraging signs this week emerged that Covid-19 infections are flattening. While no one thinks we are out of the woods yet, it is a glimmer of hope.

The big worry now is the economy and the debt. Debt is likely to rise to more than $1 trillion. Never before in our history has such a torrent of government money rushed out the door so quickly. Not even in two world wars.

More than $200 billion of borrowed money has been provided by the government in stimulus and wage subsidy packages to try and stop the economy falling over while we are in lockdown.

Most Australians have not yet grasped the magnitude of what has just happened.

Don’t get me wrong, I broadly support what Scott Morrison and the National Cabinet have done, despite the mega cost.

We must avoid becoming Italy or New York with old people dropping like flies, gasping for their last breaths because of a lack of ventilators. These are people whose kids and grandkids might have otherwise enjoyed more precious years together.

Coming into this, we were already in a big debt mess, a hangover from Labor’s over-spend during the 2008 GFC followed by undisciplined budgets under Rudd and Gillard. Billions spent by both sides of politics by way of taxpayer subsidies for futile climate measures have contributed to the rivers of red ink across Australia’s books.

Remember, Australia had no debt and money in the bank when John Howard and Peter Costello left office in 2007.

Just as the budget was finally coming back into surplus and some hope was emerging that we could keep our debt below $700 billion, the bushfires and the virus have pummelled us.

The iron law of economics, despite what the left says, is that debt must be paid back. There is always a day of reckoning – just ask the Greeks.

For organisations like GetUp! which seem to have disproportionate influence on our nation’s politics, debt doesn’t matter.

They are gloating that this newfound government largess should be the new normal. 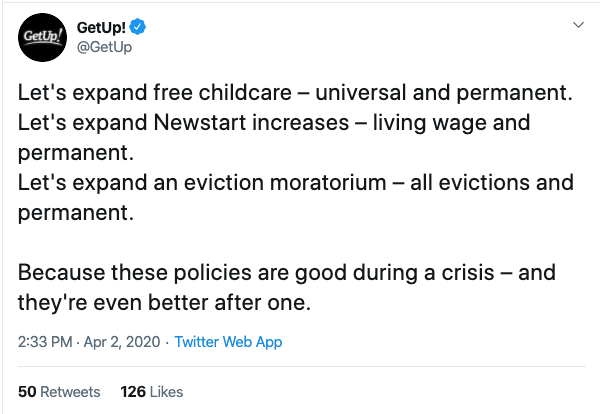 Are they serious? We’d all love it if the government could forever provide us these goodies.

“Governments don’t have dollars, only taxpayers do and the hangover from this crisis will have to be addressed and it’s going to be a very difficult hangover indeed.”

So how do we service a $1 trillion Commonwealth debt? And remember, all of our state governments have also racked up more debt due to the crisis.

Queensland’s was sitting at a whopping $92 billion thanks to undisciplined Labor governments.

Deloitte Access Economics has suggested an increase in the Medicare levy to fund what will likely be an annual interest bill nudging $2 billion.

They suggest the capital, like our war debt, could be paid down over decades as the economy continues to grow. It might take 36 years.

That’s a viable strategy but one that will require a move away from the current self-imposed handbrakes on the economy.

Instead of just shipping coal to China and India to be burned in new generation clean-coal power stations over there, we should be building our own and burning our own.

Harnessing Australia’s competitive advantage in energy, instead of sabotaging it, will have to be the way ahead if we are to recover.

Our dependence on Communist China has been exposed and the need for local manufacturing laid bare. We can’t compete with China on wages but we can on cheap energy.

Imagine Australia becoming a cheap energy economy bristling with manufacturing jobs again. And it doesn’t have to mean a return to industry subsidies.

What it does mean is abolishing expensive and futile climate policy subsidies.

Coronavirus has shown us what a real crisis is. Flattening the debt curve will have to mean leaving behind the fake crisis that has hamstrung us these past two decades.