Is the PM truly serious about saving women’s sport?

Is the PM truly serious about saving women’s sport?

“It’s male and female bodies that jostle in sporting competition, not gender avatars.” – The Australian

With the biological male, Lia Thomas, smashing women in Ivy League swim meets in the US, Prime Minister Scott Morrison this week backed a bill to protect women’s sport here.

This is great news but it begs a number of questions about whether the PM, who openly courts the Christian vote, really does have the will and courage to see this through.

Firstly, the bill, put forward as a private Senator’s bill by Claire Chandler, is necessary because Morrison’s own sports minister, the beleaguered Richard Colbeck, in 2019 backed transgender guidelines for girls’ and women’s sport in Australia. 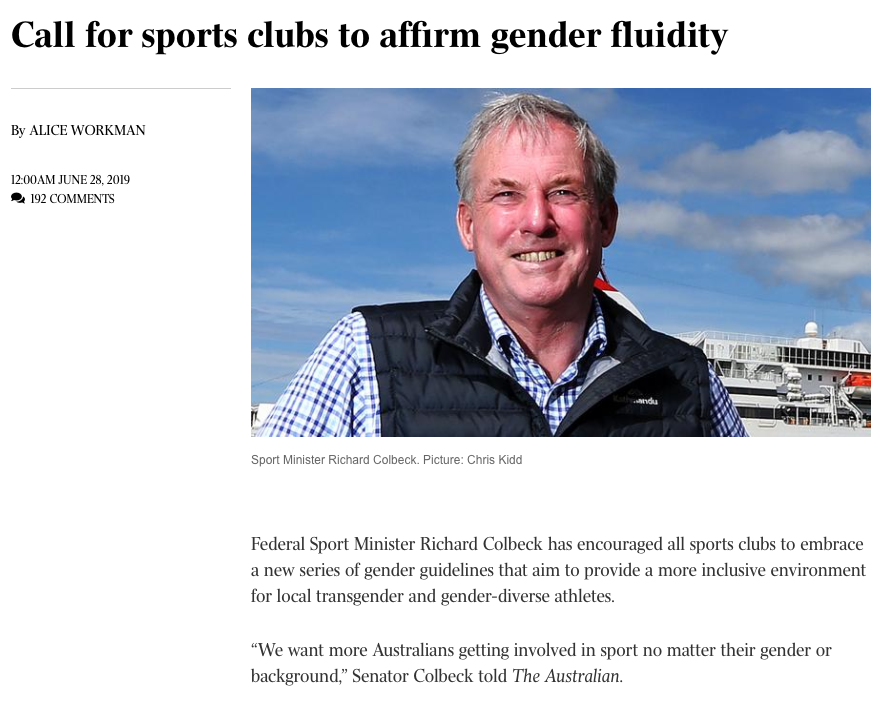 Here’s what today’s editorial in The Australian said about Colbeck’s guidelines:

In 2019, two public agencies, Sport Australia and the Australian Human Rights Commission, issued a trans inclusion guideline putting pressure on sporting codes to reorganise games on the basis of self-declared gender identity – a concept confined to the academic fringe until relatively recently. The clear implication was that sports trying to hang on to the female-only category risked uncapped financial penalties under federal anti-discrimination law. In theory, there is still a qualified exemption for female-only sport – based on the obvious physical advantages of male over female bodies in many competitions – but government-backed activism has come close to intimidating any sport seeking to rely on that exemption. The risk of injury and unfairness to girls and women has been overshadowed.

If Morrison was truly serious, he would tell Colbeck to tell Sport Australia and the AHRC to bin their anti-girl and anti-women guidelines.

Labor wants Colbeck, who is also aged care minister, sacked for going to the cricket instead of a Senate inquiry into Covid in aged care homes.

But Morrison should sack him for destroying girls’ and women’s sport.

Secondly, Morrison recently threw Citipointe Christian College under the bus because its enrolment policy was designed in part to protect girls from biological male intrusion into their sports and changerooms at school.

Thirdly, if Morrison was serious, a private Senator’s bill, most of which languish on the notice paper on the never never, would be unnecessary.

If he was serious he would make it a government bill.

Equality Australia, a permanent well-funded political machine which morphed into being after the same-sex marriage plebiscite, would set its hair on fire for a day But so what? Mainstream Australia would cheer and girl’s and women’s sport would continue as normal.

But a feature of Morrison’s premiership so far has been a shirking of the culture wars, allowing LGBTIQA+ political activists to run amok with their harmful gender fluid ideology, even spruiking it in schools to the youngest and most vulnerable.

It’s up to the trans inclusion activists to persuade Australians that sporting categories should be divided according to a person’s subjective idea of their gender identity, even when this is at odds with their objective biological sex. After all, it’s male and female bodies that jostle in sporting competition, not gender avatars.

If only the PM had the courage to say this and then to act.

The Australian’s editorial finally called out Equality Australia for its tactics of branding anyone who disagrees with its view of the world as “haters”.

This continues the tradition of trans rights advocacy with weak arguments and the emotive framing of contrary views as hateful and bigoted.

This of course was the same tactic they used to intimidate Australians into voting to redefine marriage during the 2017 plebiscite.

Here’s my tip for the election. Whichever major political party takes up the cause of saving girls’ and women’s sport will win.

Such is the power of the rainbow mouse that roared, I am not holding my breath.