It's hard to believe this happened in Australia

Tony Abbott an enemy of the state?

Normally the Deep State is more discrete. It generally beavers away in secret from within the bowls of the Canberra bureaucracy.

It’s mission: dismantle conservative policies regardless of who is in government.

For instance, no one knew who put the gender fluid toilet signs up on the dunny doors in the Prime Minister’s Department.

But they had Deep State fingerprints all over them. Someone thought it was time to smash the gender binary of all those bigots in the burbs who think anyone with a testicle is male.

Its goons were outed - caught red-handed, like Sergeant Schultz sneaking a swig out of Colonel Klink’s schnapps bottle.

Deep State had a point to prove about “nefarious foreign agents” in this nation and it was determined to expose them, thinking mainstream Australians would say “of course”.

After all, the Deep State knows what’s best for you whether you know it or not.

It thought it would be really smart and use new laws designed to catch Chinese communist or foreign radical Islamist spies to go after ….. wait for it …. Tony Abbott! 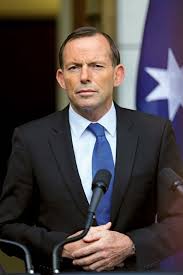 Yes, that’s right, our Tony – conservative hero and nemesis of the…. you guessed it…. Deep State.

The Deep State operatives in Christian Porter’s Attorney General’s Department didn’t use their new powers to probe the global links of local violent Extinction Rebellion anarchists nor did they open an investigation into how GetUp has used foreign money to influence Australian elections.

Why would they? Deep State knows who is on the right side of history and who is not.

Instead its goons sent letters of demand to Mr Abbott and the head of the one-man Liberty Works think tank, Andrew Cooper, demanding they register as “agents of influence”.

The former PM’s crime? He spoke at the recent Conservative Political Action Conference in Sydney organised by Cooper.

Now CPAC had its roots in the United States during the Ronald Reagan era and has run freedom-celebrating conferences ever since. Reagan of course was one of the indispensable players in the fall of the genocidal and bloody communist Soviet Empire.

CPAC is about promoting freedom of speech, freedom of association, family values and the free market – all indispensable items of a flourishing society.

All, incidentally, things which the Deep State hates.

Reagan spoke at the first CPAC in 1974 – a time of history forgotten by the A-G’s goons who repeat 70s-era goon-like activity.

Cooper was threatened with jail time if he didn’t hand-over a swathe of documents from his conference within a fortnight. No joke.

It didn’t matter that the conference was an open event which anyone could go to and at which the media were invited.

This wasn’t a Confucius institute clandestinely supported by the Chinese Communist Party. But hey, no letters of demand for the Chinese spies on our university campuses.

Thankfully both Abbott and Cooper told the A-G’s department to take a running jump.

Cooper has dared them to lock him up. Bet they don’t, now the public know.

A-G Christian Porter is reported to be red with anger and embarrassment. And so he should be. What a joke. The Deep State always thumbs its nose at conservative government ministers.

The letter sent to Cooper threatening jail was sent by Sarah Chidgey, the deputy secretary of the “Integrity and International Group” of the A-G’s department.

It’s not every day the Deep State throws up names.

But a look at her bio on the Department’s website shows she has an honours degrees in Arts and in Law from the Australian National University in Canberra.

It’s probably not her fault that she thought Abbott and Cooper needed to be outed as enemies of the state.

After all, she’s from a university that vehemently rejected the Ramsay Centre’s offer for courses in how Western Civilisation made the West free.

She probably never learned about the Stasi in East Germany which informed on its fellow citizens and the black cars of Hungary which picked up people in the middle of the night never to be seen again.

She probably doesn’t know who Alexander Solzhenitsyn was or why he and millions of others were sent to the Gulags.

She is probably ignorant of the rivers of blood left by communists from Moscow to Beijing.

So when she had the chance to administer laws designed to keep Australians safe from real threats like Chinese Communist spies or Marxists openly plumping on our streets for the overthrow of Australian democracy, her moral compass didn’t point there.

Its needle reflexively swung in the direction of those who are the heirs of Reagan’s freedom quest.

Reagan might have helped bring down the Berlin Wall, but the children of totalitarianism now inhabit the Deep State.

And they have picked up in Canberra where the Stasi left off in East Berlin.