Julia Baird and the muzzling of dissent

Making some people unworthy of participation does not help debate.

I loved her biography of Queen Victoria and have long admired her skill as a writer, academic and television commentator.

When she hosted Q&A three years ago and had me on as a panellist, she was tough but fair.

But I’m struggling to understand the logic of her stinging criticism of me and some others in her SMH column yesterday.

The page one teaser read Julia Baird: The hypocrisy of Greta’s critics, referring to the 16-year-old Swedish climate activist whose angry “how dare you” speech at the United Nations Climate Action Summit in New York last week received saturation media coverage around the world. 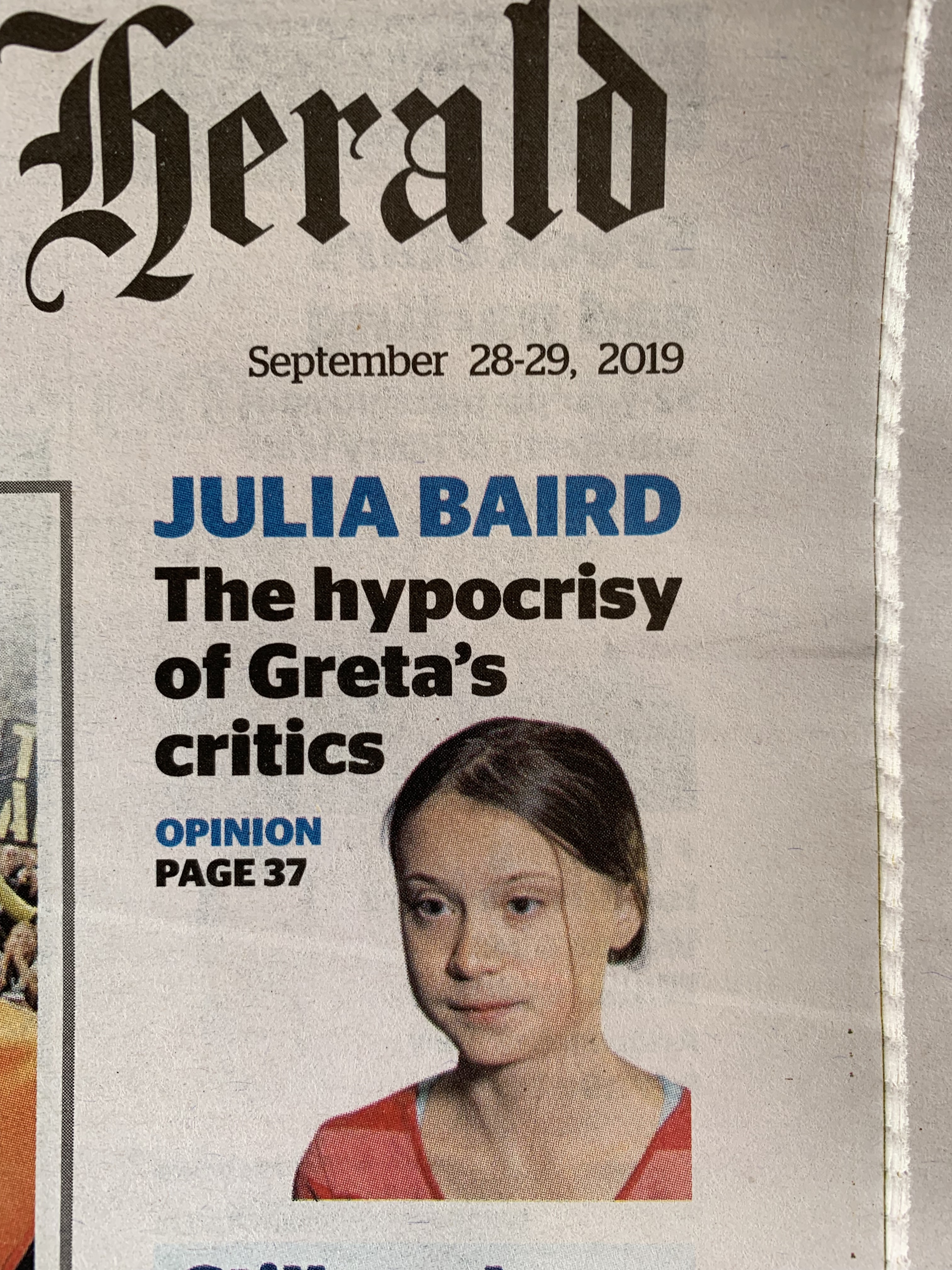 Baird’s article inside named me as being part of a group of “some blokes” who have had an “intense, irrational reaction” against Greta.

My part in this crime was two-fold. I had tweeted my opinion that Greta’s speech was “hysterical”.

Looking through feminist glasses, this seems to have been offensive to Baird because apparently I was using this word because of Greta’s female gender, something that had not entered my mind.

Conflation can be a powerful tool in silencing debate. Yes, some misogynists have used “hysterical” as a put-down of women and this is of course wrong.

But that doesn’t mean every use of the word in critique of an argument is meant that way.

Whether a boy or a girl made a speech like that to me is irrelevant. My critique was of the content of the argument, not a personal attack on her gender - or her age, for that matter.

I get that Baird seems to agree wholeheartedly with Greta that the world is facing immanent catastrophe unless even more action is taken.

But many people of good will do not agree and are rightly concerned with the fear and, dare I say, hysteria, that is being whipped up in the name of climate activism.

There are many good reasons to question the claims of climate politics and to be wary of the far-reaching policy prescriptions demanded which are forcing up electricity prices and which threaten our ability to keep lifting the poor.

Apart from the sin of critiquing a girl, my other sin is even more perplexing to fathom.

Baird described Andrew Bolt, Mark Lathan and me as people who posit ourselves “as the most public, prominent defenders of Christianity”.

Yes, we defend Christianity, but I don’t think any of us have sought to set ourselves up as she describes. There are far more prominent people and Christian leaders I would rather see out there defending the faith.

Bolt and Latham are not even Christians but I know many Christians, myself included, appreciate the way they deploy logic and reason to advocate for a fair go for Christians.

In what is becoming an increasingly toxic public discourse for Christians, we need all the help we can get.

Somehow the three of us, while critiquing Greta, erred in not also taking the vile Kyle Sandilands to task for blaspheming the virgin Mary last week on live radio.

“Nothing to say about the fact that one of Australia’s most prominent radio hosts called Mother Mary a mendacious hussy and opined that Christians possess the IQs of canine faeces,” Baird said.

“Zip. Instead, the week was dominated by mass bullying of an earnest schoolgirl.”

Living in Brisbane these days, I did not even know about Sandilands' latest verbal vomit.

I did notice some headlines online but have to admit that when I saw Sandilands’ name, I rolled my eyes and scrolled.

I had no idea what the fuss was about until I read about it yesterday in Baird’s column.

But apparently I’m a hypocrite for critiquing Greta but not Kyle.

Even if I was aware of Kyle’s outrageous spray at Christ’s mother and chose not to tweet about it, so what?

That shouldn’t disbar me or others from having something to say about a 16-year old’s call to take an axe to the economy because she believes the world is about to end.

No one’s argument, whether a child or a female’s, should receive a leave pass from debate and discussion in the public square.

People in lower socio-economic income brackets, and in small business, have suffered much already because of the money we have spent through tax-payer subsidies and high electricity prices on “climate action”.

Greta is demanding we take even more radical action in line with UN policy. Bill Shorten took the UN’s policy of a 45 per cent cut in greenhouse emission by 2030 to the May election and lost.

Respected economic forecaster Brian Fisher said Labor’s policy would have cost Australia up to half a trillion dollars and hundreds of thousands of jobs.

I would rather see Baird devote a column to explaining why we should ignore this economic analysis.

Now, Baird of course was right to call out Sam Newman for demeaning of Greta as a sh... Trolls in any debate must be called out.

But that’s not what Bolt, Latham or I did yet we have been lumped in with the likes of Newman as blokes irrationally “triggered” by a young female.

We have not been triggered by her argument because we are, apparently, blinded by her identity.

Sadly, some of our better-educated commentators seem to want to exclude some of us from debate.

We are not worthy of making a contribution unless we can navigate the PC dance of not offending identity groups or remember to cover every other conceivable base before we venture a critique of the orthodoxy of elite opinion.

This is an impossible burden but maybe it’s meant to be that way.

Baird would do well to critique our arguments rather than try to shut us down by seeking to de-legitimise us with unfounded slurs or conflating our apparent sins of omission.

The latter is intellectually lazy but has become a favoured debating tool.

It is a dangerous tool because it is affecting the ability of an entire generation to think critically.

Eugenics should have no place in civil society.

Will we now start to take notice of what’s going on in our politics?

It felt like a collective act of defiance against the ABC.