Queensland Conservative Party No 2 Senate candidate Joanna Lindgren gave a cracking speech at a recent party function at The Kenmore in Brisbane. She touched on our dysfunctional child protection laws, Gillette and toxic feminism, freedom of speech and much more. Jo is a former LNP Senator for Queensland who has joined the Conservatives because she could see there was a better way.

Good afternoon, my name is Joanna Lindgren and I am an Australian Conservative Senate Candidate.  Before I start, I would like to declare that this speech is my opinion only and I do not speak on behalf or represent any organisation.

Ladies and Gentlemen, Democracy is not a spectator sport.  We are here this afternoon because we want to preserve all that is great about our country and to change what is necessary to ensure it remains great. But to do that, it will take courage and conviction.  Trump’s motto is Make America Great Again, I say there is a better way to Make Australia Right Again.

A political party should not be a vehicle for someone to go into parliament only for them to go off on their own track or agendas once they get there. Politics should not be a career to be preserved at all costs. So many of the people you have elected to represent you are so risk adverse and they jump at any loud noise coming from the left.  Politics should be a calling where conviction to a cause or causes is paramount.

So, what are my causes?

First and foremost, the protection of values and a way of life that has served us well.  This country has made changes and should make changes when needed. It should not be stuck hindered by a raft of outdated ideas or populism, but it must retain all those ideals that are good and have brought about positive changes.

I am sure many you in the room are appalled when we hear child abuse stories on the news.  I often think about the words - Suffer the little children for theirs is the Kingdom of heaven.

Australia’s child protection laws are far from heaven-sent; and if you can’t trust parents and families to ensure children under their guardianship are safe, then we should do whatever it takes to care for those children.

Child abuse is becoming endemic and yet, those who should be protecting vulnerable children are avoiding the hard questions and even harder answers. 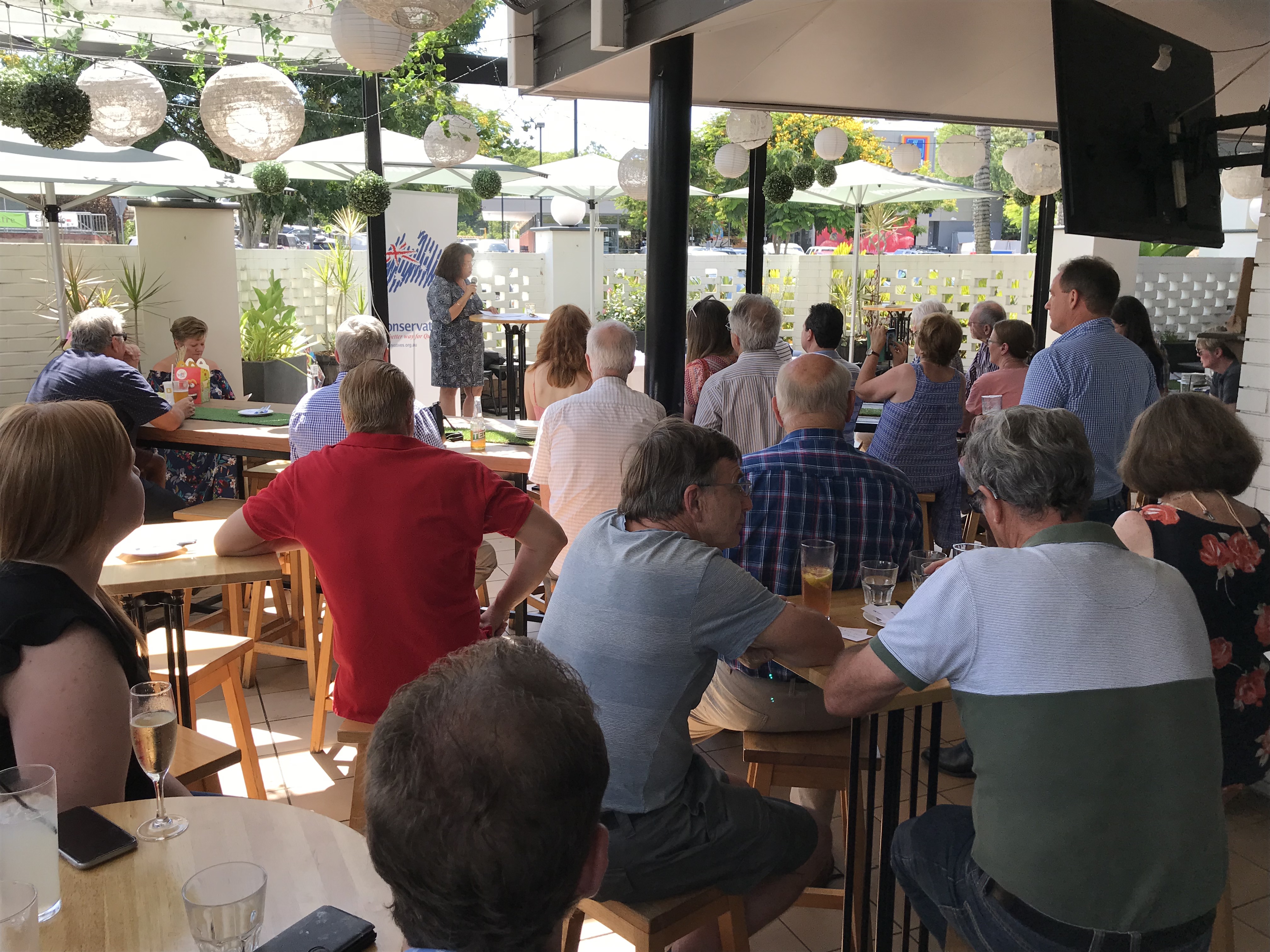 First, the children in domestic violence situations are overlooked by various feminist groups.  The most abhorrent type of abuse is the killing of a child, yet it is the violence of men towards women that is most frequently reported on and not of a parent(s) towards a child.

Research by the Institute of Criminology finds that women are quite capable of inflicting abuse on children; and are shown to be on equal footing with men when it comes to infanticide and lead in murder suicide rates.  It appears that domestic violence and abuse towards children is recategorized as child abuse and therefore, does not setback the narrative about violence by men. It goes to stand that if women are capable of this level of violence, then they are just as capable of violence towards children.

Secondly, even when child abuse is recognised, our response is feeble at best; only being outraged when it is too late.  Authorities are quick to act when a carefully edited Current Affairs show about an adolescent who is well known for violence and self-harm is restrained, but pitifully slow when many more infants are repeatedly abused.  The very people that should be protecting children are more interested in ‘keeping the family together’ and ‘rehabilitation’ even when the stakes are as high as child abuse.

The case of the two-year-old rape victim and her siblings in the Northern Territory is a frightening example of how this practice is indefensible; particularly when the family of the victim were well known to Child Safety authorities.

The weaponizing of culture does very little to protect many children, but it is a very effective way of wasting money and making some retreat to their position of visiting communities and taking photos. The left is now starting to realise the value of weaponizing culture by offering talk fests, butcher paper exercises and saying how bad child removal is without looking at the root cause of those removals – their home life.  This paternalistic attitude will not protect children from abuse, but instead will only protect the abuser/s.

As a nation, we have failed our children when over 30,000 children are in long term ‘out of home care’ and it is shameful that a little over 300 adoptions occur each year.  It is time for all sides of politics to stop the photo opportunities, stop the talk-fests and start getting serious about the welfare of children.  It is time for a national discussion that has real outcomes for children. I do not want to see another child suffer.  I want to see children prosper in a supportive environment, where they feel safe and are loved.

I am sure you all saw Gillete’s commercial demonising men. Last week, my husband and I used the last of our Gillete razor blades and from this point on, we will not be purchasing their products and boycotting any event sponsored by them.

Figures show that 97.7% of women in Australia are heterosexual and if we believe the feminist and self-loathing - male rhetoric, all men are evil.  Then this logic would also assume that we women are incapable of picking a good man, demanding good treatment and we tolerate such alleged bad behaviour.  I think not!

Toxic feminism outrages me. They are not fighting for women’s rights. The women’s rights leaders are a clever bunch – it is more about virtue signalling, high profile media events and wait, corporate funding. Everything is a staged event.  They are not revolutionists trying to take down artificial barriers, but activists who hold staged events.  We now see women’s events address things like racism, immigration reform, environmental issues, transgender politics and police violence instead of women’s issues like women’s health, sex trafficking, FGM, child marriages, forced face veilings, honour killings and the list goes on. Ladies and Gentlemen, it is a con job.

The Constitutional Recognition movement does little to preserve cultures, improve Indigenous health, improve the adoption rates of children in long term foster care, stop the violence and sexual abuse that is grossly over represented or stop babies dying of syphilis.  We do not need another nation state within this nation, nor do we need a special chamber - a third chamber in our parliament or even a Whitlam style unelected ‘advisory committee’.

Conservatives across this nation are constitutionally confused.  Our constitution should be something that drives the head not the heart. It should be something that unites to form our nation. Any changes to the constitution should act in the interests of Australia, its states and territories and its citizens and; it should be this nation’s Parliaments alone that have the power to make laws that govern this nation, not a separate nation state for only people who identify within that nation.  My heart says we should recognise the oldest living culture in the world, but my head says this is a romantic idea and our constitution is not there to create new ‘special’ rights, but to ensure our rights are not impinged.

As the wife of a retired police officer, I lived worrying about the knock on the door by a high-ranking officer who is there to deliver bad news.  In recent times ALL of us regardless of our race, religion or sex have become visible targets of extremist ideology.

So,like all responsible Australians,I support a course of action that will maintain a strong defence force and rigorous border protection.  I will fight for a defence force that is well resourced and battle ready and, I will fight against our Defence Forces being a testing ground for the left’s agenda of social engineering.

A strong defence force requires a strong defence industry and support for every service man and woman and their families. Veterans should never be treated the way there were in the shameful Whitlam days.

Ladies and gentlemen, I am a great believer that Section 18C of the Racial Discrimination Act needs to be repealed.  Freedom of speech can lead to hurtful and insulting things being said. I have experienced this firsthand, yet it did not stop me from becoming a Senator, nor has it stopped me being a Senate candidate once again.

Freedom of speech may bring out unsavory comments and people, but it spurs on debates and it gives reasonable, sensible people a reason to speak; it gives them the motivation to speak freely.

In many other countries aggrieved cultures have taken up arms.  Do not restrict a peaceful way of change or we will see what is happening in France today drift towards our shores.

How does a community bring change when they don’t hear about the problems? Major social change is not brought about by legal sanction, but by community action and we here, should give them the means and tools to do this in a safe environment. Freedom of speech is just one of those tools that should not be restricted.

Ladies and Gentlemen, I know some of you here today are members of the Australian Conservatives, but there may be some here who have come along to find out more about our party.

Let me tell you why you should support us:

Not just because our party’s foundations are solid, and our policies are based on a good set of values and principles that put Australia and her citizens first.

Not just because The Australian Conservatives have Candidates who are willing to stand up and fight for things that are important to Australia and its interests.

Not just because you are tired of hearing slogans and rhetoric from the major political parties and them not acting upon their election promises.

Not just because Australia’s debt is spiralling out of control.

Not just because your voice is being stifled due to political correctness.

And not just because you are not being heard by the major parties.

But because of all those things you should support the Australian Conservatives at the next election.

Ladies and Gentlemen, there is a better a way and by supporting the Australian Conservatives in the Senate, you are taking out third party insurance to ensure good governance and policies.