“…the grounds on which one might mount a compelling argument against them (paedophilia and incest) have already been conceded by our culture.” – Carl R Trueman, The Rise and Triumph of the Modern Self.

The USA Today newspaper caused a storm earlier this month when it posted a tweet normalising the idea of sexual attraction to children.

“When most of the public thinks of pedophilia, they assume it’s synonymous with child sexual abuse. A pedophile is an adult who is sexually attracted to children, but not all pedophiles abuse kids, and some people who sexually abuse kids are not pedophiles.” 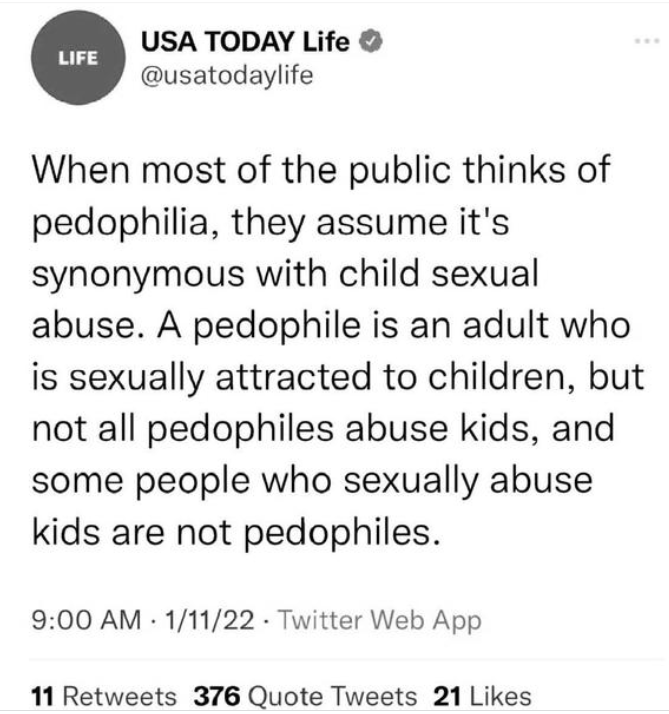 The tweet followed the posting of a story online citing a study which suggested “paedophilia is a trait that people are born with, and that not all paedophiles are inherently abusive towards children”.

USA Today went on to report:

Michael Seto, forensic research director at the Royal Ottawa Health Care Group in Canada, said there is more neuroscientific knowledge of pedophilia than ever before. MRI research is showing how sexual interests develop in the brain.
"I think as a field, we've accepted the idea that this is not something that people choose," Seto said.
Seto said pedophilia is something people are born with or at least have a predisposition to.

This follows the trajectory of de-stigmatising homosexuality to the point where Lady Ga Ga released a song “Born this Way”.

The USA Today story also mentioned the case of Allyn Walker from the Old Dominion University in Norfolk, Virginia who argued last year that “destigmatizing the attraction (of paedophilia) would allow more people to seek help and ultimately prevent child sexual abuse”.

After an outcry, he resigned.

If what Seto and Walker are saying about the sexual identity of paedophiles is true, why should they be one of the only sexual identity groups forbidden to act out their sexuality?

The answer to that is of course that a child can never give informed consent to sexual activity.

The idea of de-stigmatising paedophilia only arises because of the mistake of modern identity politics in defining everyone by their sexual identity.

Humans are more than the sum of their sexual urges and there are obviously many urges, not just paedophilic ones, that should never be acted upon.

But the sexual revolution has taught us that “anything goes”.

And if sexual orientation is based on being “born this way”, why shouldn’t paedophiles take their place in society?

It’s a slippery slope to give people (overwhelmingly men) the legitimacy of a category for their sexual fantasies.

It’s an iron law of public policy that what is licensed expands in scope and reach. There can often be unintended consequences.

When artists like Bill Henson are defended for their photographs of naked 12-year-olds, is that putting grease on the slope?

If adult pornographic images have the same addictive impact on the brain as crack cocaine, what effect will images of naked children have on a de-stigmatised paedophile at a Bill Henson exhibition?

It’s good that USA deleted its tweet. This is a genie we should not let out of the bottle, regardless of what modern identity politics tells us.