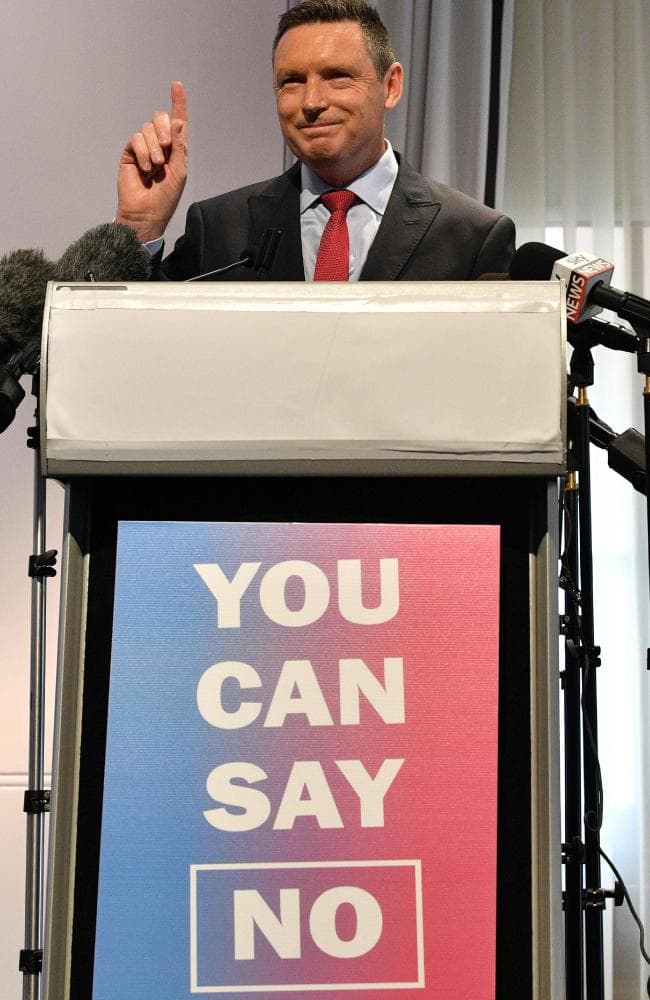 ON Sunday, in his hometown of Toowoomba, Lyle Shelton is expected to announce he is joining Cory Bernardi’s Australian Conservatives party to run for the Senate.

It’s a big gamble to quit his job as managing director of the Australian Christian Lobby, where he led the No campaign’s fight last year against same-sex marriage, and to move his family from Canberra to One Nation’s stronghold of Queensland. But what a coup for the Australian Conservatives. They are lucky to have him.

Shelton is the most persuasive advocate of social conservatism in Australia, and the most potent foe of the new authoritarianism of identity politics. Without his conviction and forceful eloquence, the No campaign could not have achieved a 40 per cent vote.

He says it was during that campaign that he “felt very much drawn to the … partisan side of politics [and] decided to make a big step and move back to my home state of Queensland. Politics needs Christian influence from the inside”.

Having weathered foul personal abuse, physical threats and the bombing of his office in Canberra, Shelton will be the most battle-hardened politician in Canberra. Nothing the Greens or Labor throw at him could compare.

“I’m not leaving the battle for the values you and I hold dear,” he said in a video released yesterday announcing his successor at ACL, his 29-year-old chief of staff, Martyn Iles. “[I am] just going to a different part of the battlefield”.

At 48, Shelton has wisdom and the energy for a new battle. His challenge will be not only to beat One Nation but to persuade disillusioned LNP voters that his new party is a “constructive alternative” rather than just another party of protest which will help Labor into office.

The father of four children, aged 16 to 20, Shelton, the son of a Pentecostal pastor, grew up in the Garden City, attended Toowoomba Christian College, studied journalism at the University of Southern Queensland and served six years on Toowoomba city council, before joining ACL a decade ago and serving as managing director since 2013.

Along with the bombshell defection to the Liberal party on Friday of devout Christian and former Family First Senator Lucy Gichuhi, Shelton’s career move signals a shift in the political landscape towards social conservatism. It is an inevitable response to the radical social change being imposed by far left extremists.

No longer can Christian politicians be regarded as fringe-dwellers. Whether you are religious or not, Western civilisation has its roots in Christian values, and an assault on one is an assault on both. Without such a framework, you are literally blind the dangers of identity politics, Marxism’s new guise.

Unlike most politicians, Shelton’s eyes are wide open.