This is a big story and it goes to the heart of the struggle for the soul of the Liberal National Party.

Toowoomba, Queensland, is the conservative heartland of the LNP where its sitting federal member for the electorate of Groom is cabinet minister John McVeigh. 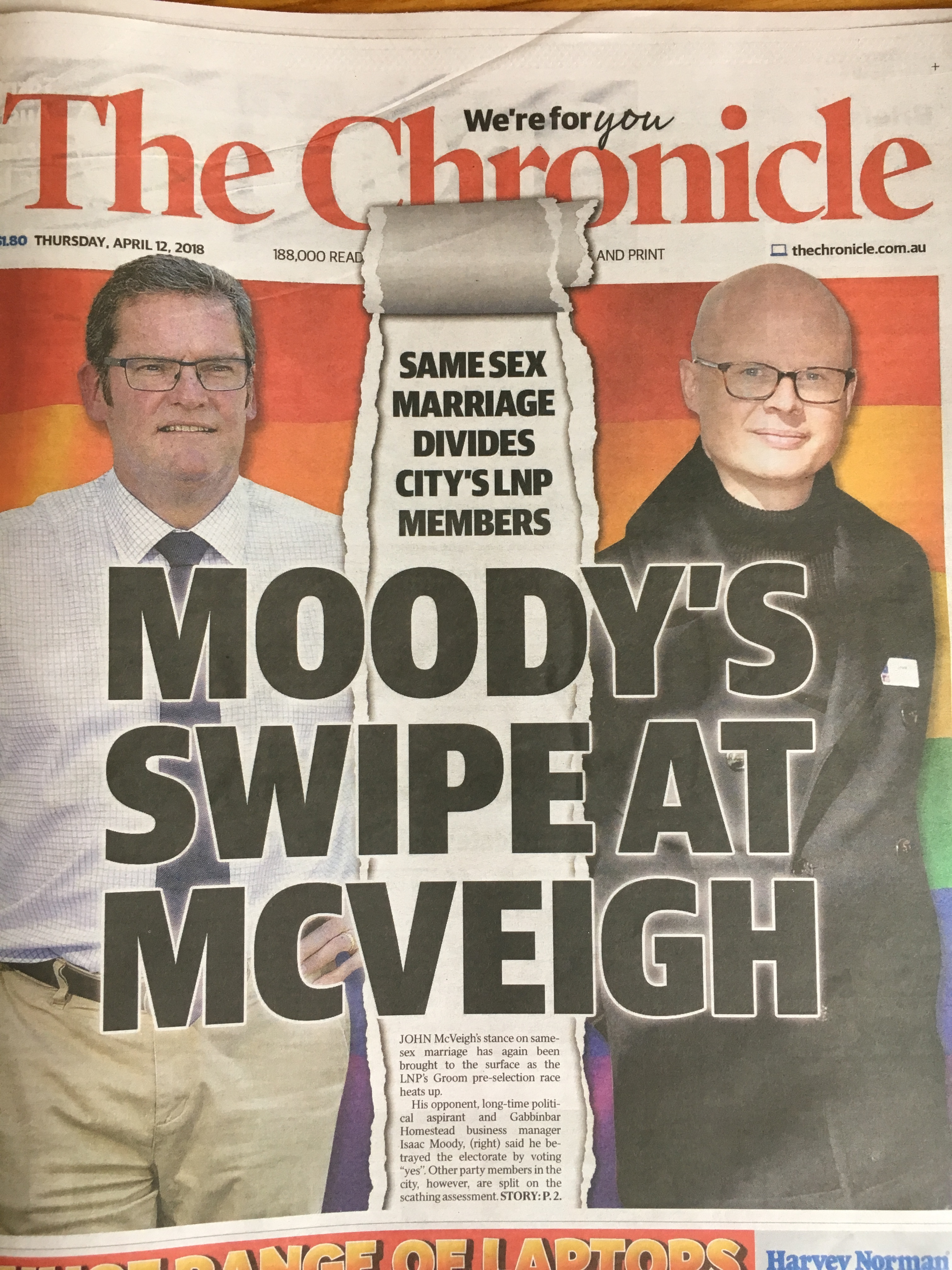 I have known both men for years and consider myself friends of both.

It is not every day that a sitting member’s pre-selection is challenged, particularly one who is a member of Cabinet.

Political tragics will know it is not unprecedented - Malcolm Turnbull won the seat of Wentworth by stacking the branches and knocking off sitting member Peter King, in what was one of the most bitter internal party stoushes in Liberal history.

So what has Moody so riled?

According to today’s Toowoomba Chronicle, one thing – trust.

In a leaked introduction to party members, Moody is reported to have said:

"(Mr McVeigh) who is now our federal member for Groom, gave a clear commitment during that pre-selection to support traditional marriage. When John McVeigh voted 'yes' in parliament for same-sex marriage he acted against this clear commitment and in doing so betrayed the trust of Groom LNP members.

"If we can't trust our elected representative to honour a commitment he made to us - a commitment on the most high profile issue of this parliament - then how can we trust him on other issues?"

Putting aside momentarily the issue of same-sex marriage, Moody’s grievance goes to the heart of why so many Australians are disappointed and disillusioned with politicians.

My concern with the LNP, which is highlighted by this very public rift, is that even conservative members like John McVeigh can’t find it within themselves to fight for values which go to the heart of what it means to be a conservative.

So powerful are the forces within the party that they do not boldly advocate publicly for the things they tell their pre-selectors they believe in.

Yes, the cultural pressures of the Zeitgeist are powerful but conviction politicians see it as their role to advocate publicly for the truth.

Politics is a contest for ideas and it must be fought in public.

The battle for marriage was lost over ten years as conservative politicians vacated the field while the Greens, Labor and Liberal left politicians relentlessly argued in public for change.

Unable to hear the counter-arguments sustained over time, voters went with the flow at last year’s plebiscite.

I often wonder if we had had courageous advocates on our side (not like the ones who were assuring their pre-selectors of one thing and then being silent in the public debate that mattered) whether the outcome of last year’s plebiscite would have been different.

Conservative politicians like McVeigh don’t seem to understand that their silence and then capitulation have betrayed the conservative values of family, freedom of speech, religion and the rights of children that parties like the LNP once stood for.

As a group unit, the Coalition parties failed to protect freedom of speech and religion as one of their own Senators, Dean Smith, shepherded through Parliament a same-sex marriage bill that leaves the freedoms of five million Australians trashed.

There was no fight in the Coalition for free speech and freedom of religion. Many of them voted against the amendments put by Senator James Paterson which would have protected freedom of speech and conscience.

No wonder the pre-selectors who were told one thing and then got another are upset.

The inability to fight in public (or at all) for the conservative values the party once believed in is the reason why people are flocking to parties like Australian Conservatives.

I hope the Isaac Moody’s of the LNP are successful in dragging the LNP back to its conservative roots.

But I suspect that when the Groom pre-selection is held on April 28, it will be Christopher Pyne and Malcolm Turnbull’s Black Hand movement that prevails.