The fastest growing form of discrimination in our society is against people of religious faith, especially Christians. – Mark Latham

Unlike Scott Morrison’s failed Religious Discrimination Bill, Latham’s would have protected people like rugby great Israel Folau and his less-famous counterparts from losing their jobs if they quoted the Bible in their own time.

It would have protected wedding magazines which specialise in heterosexual weddings and protected employees from losing their jobs for being associated with Christian organisations. 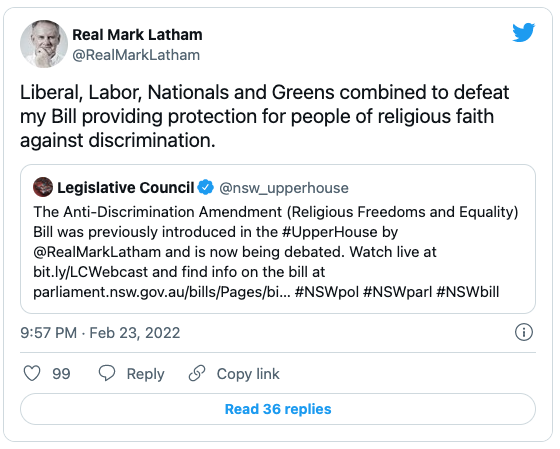 Latham’s Bill was the subject of wide-ranging consultation with faith communities, religious legal academics and it won the support of a Legislative Council inquiry.

The inquiry received 192 submissions and 19,502 responses to an online questionnaire, signalling the religious community’s strong desire for protection.

Latham thanked the Christian Democratic Party’s Rev Hon Fred Nile for supporting his bill, one of only four to vote with him.

The then Berejiklian Government had agreed to bring forward a Government bill on religious freedom but said it would wait until Morrison’s federal law was passed.

Opposed by five of Morrison’s own so-called “modern Liberals”, it is not known if Morrison’s bill will ever get up even if the Liberals win the up-coming federal election.

Morrison’s failure prompted Latham to bring his bill forward because of the continued discrimination against, and “public sneering” of, people of faith.

This was evidenced in the chamber last night with the Greens asserting without evidence that religious people simply wanted to “hurt” and “hate” LGBTQI+ people.

Sadly, the same-sex marriage campaign’s standing political vehicle, “Equality Australia”, opposes religious freedom so it can continue to impose its rainbow ideology on religious people, their schools and places of worship. 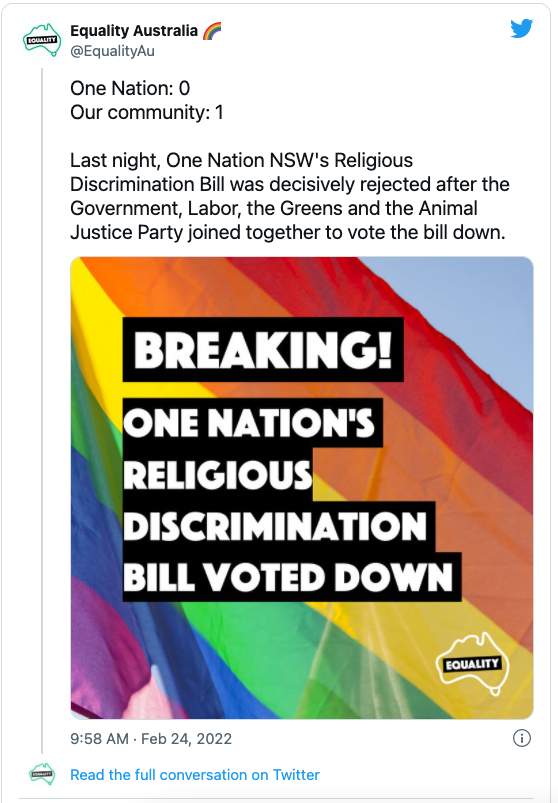 When he introduced the bill in 2020, Latham said: “Just as it would be wrong to tell the Mardi Gras not to be gay, or to tell an ethnic body not to be ethnic, religious organisations must be allowed to remain religious in their guiding principles and practices”.

It’s ironic that Latham, not a Christian, has become one of the greatest defenders of religious freedom, while Scott Morrison and the Liberals are afraid even to defend tennis legend Margaret Court and Folau.

It’s worth quoting his first reading speech at length.

Yet now the fastest growing form of discrimination in our society is against people of religious faith, especially Christians. We have all seen the high-profile cases of Israel Folau and Margaret Court, outstanding Australians treated like second-class citizens because they take a literal interpretation of the Bible—the most important, influential and popular book in history; the book that has given civil society much of its moral code, our understanding of right and wrong; the book that stands today as one of the essential pillars of Western civilisation. Those who quote from the Bible should not be hounded from the public square as Folau and Mrs Court have been. All religious faith that respects the sanctity of life and the goodness of the human soul and reaches out to others with the hope of salvation and compassion should be honoured in our society.