Persecution of family doctor a warning to parents to shut up

My friend Dr David van Gend, a mild-mannered Toowoomba GP, is in trouble with the Medical Board for re-tweeting me. I kid you not. This attack on freedom of speech demanded the media release below.

Persecution of family doctor a warning to parents to shut up

Parents’ rights to question the indoctrination of their children with radical gender fluid ideology at school has been set back with the Medical Board’s investigation of a Queensland doctor.

In April, Dr van Gend retweeted a selfie of Shelton and Dr Ryan T Anderson, author of When Harry Became Sally – Responding to the Transgender Moment. 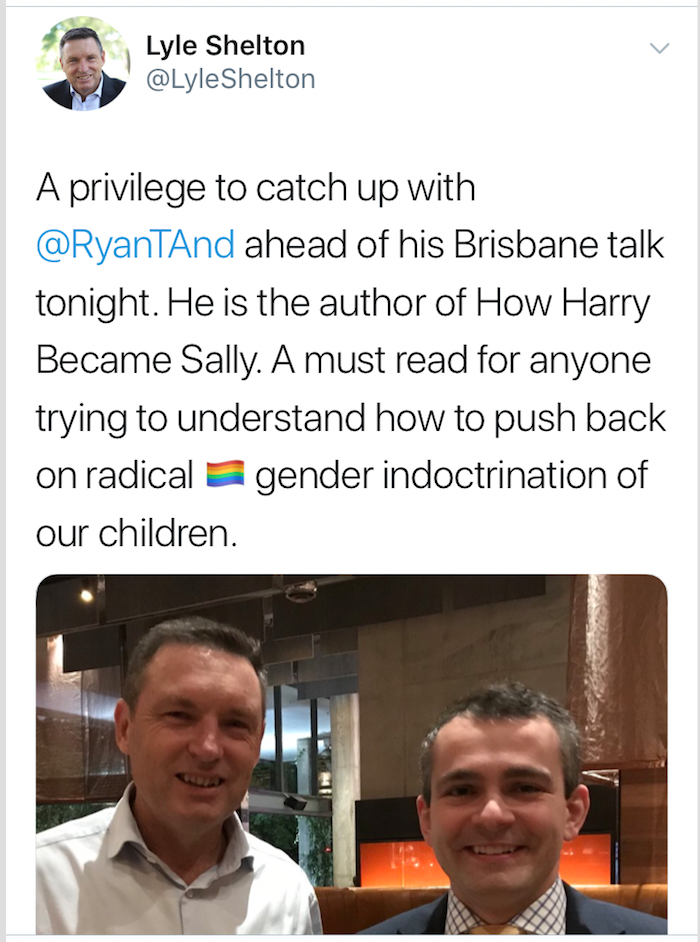 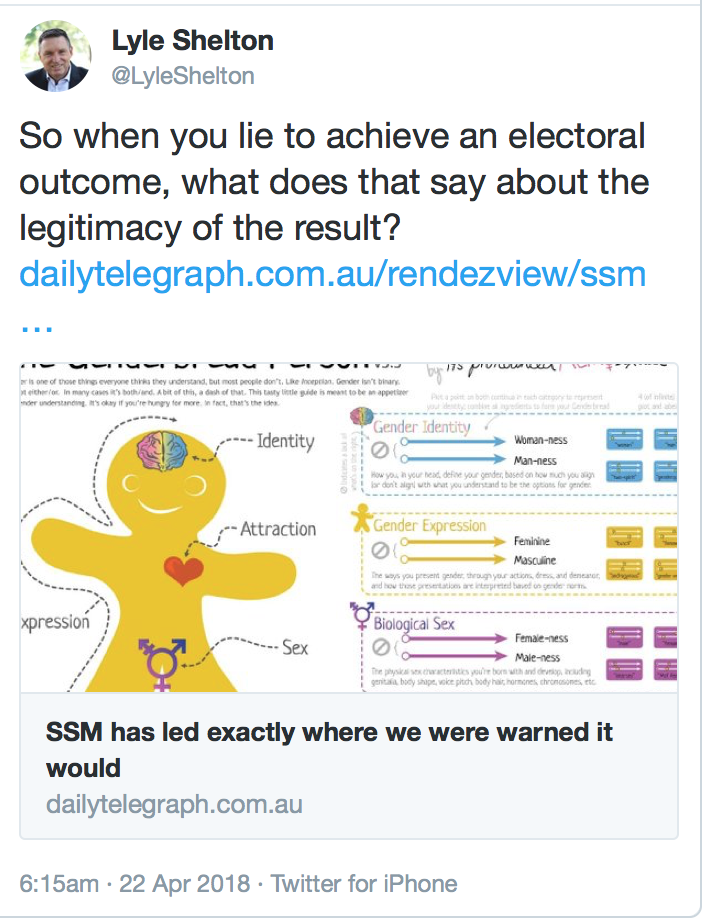 The article exposed Queensland Education Minister Grace Grace for admitting what the same-sex marriage lobby denied during last year’s plebiscite – that gender fluid teaching in school is a consequence of same-sex marriage.

“If the Medical Board can punish a medical professional for questioning that children’s gender is fluid, God help the parents who try and protect their kids from being indoctrinated at school,” Mr Shelton said.

“If the Medical Board is so confident that children’s gender is fluid, why doesn’t it allow discussion and debate?

“Why must it use its power to crush even the questioning of contested science?

“It is much easier to shut people up than to have a proper discussion but sadly free speech is not the way of modern politically correct elites.”

Mr Shelton, who was spokesperson for the Coalition for Marriage during last year’s plebiscite, said the LGBTIQ lobby owed an apology to the brave mums who fronted C4M’s television advertisements warning that children would be taught radical LGBTIQ sex and gender theory if marriage was redefined.

Dr van Gend is a hero to tens of thousands of parents for his role in exposing the harms of the so-called “Safe Schools” program.

He is the author of the best-selling book Stealing from a Child – the Injustice of Marriage Equality.

The Medical Board has become the censorship board

YOU know our culture has reached peak Kafka when a doctor is hauled before his medical board on professional misconduct charges for retweeting two tweets by a conservative Senate candidate promoting a book about gender ideology and one of my columns.

That’s what happened to Toowoomba GP Dr David van Gend two weeks ago when the prosecutorial arm of the Medical Board of Australia, the Australian Health Practitioner Regulation Agency, notified him of a complaint.

One of Shelton’s tweets was a selfie with American author Ryan Anderson from the conservative Heritage Foundation: “A privilege to catch up with … the author of How Harry Became Sally. A must read for anyone trying to understand how to push back on radical gender indoctrination of our children.”

The other Shelton tweet was a retweet of a column of mine critical of gender fluidity classes in schools, titled “SSM [same-sex marriage] has led exactly where we were warned it would”.

Van Gend, a conservative Christian, retweeted these tweets without comment. That is the sum total of his offending.

Three months later, he received the ominous “notification about your conduct” from AHPRA.

The complainant alleges van Gend is “presenting as a medical practitioner and providing information that is ‘clearly not medically, psychologically, nor scientifically based’ and not promoting public health,” APHRA states.

“The practitioner (van Gend) has ‘retweeted’ Mr Lyle Shelton’s tweets promoting books that ‘push back on radical gender indoctrination of children’, and an article titled ‘SSM has led exactly where we warned it would’”.

He must explain in writing to the Medical Board by 12pm Thursday: “Whether your posting on social media ‘twitter’ promotes the health of the community and advances the health and wellbeing of individual patients”.

APHRA is a mighty body with powers to prosecute, involve police and apply criminal sanctions to doctors who transgress medical ethics and the law. It was designed to stop killers, incompetents and charlatans who endanger lives, not to stop private citizens with medical degrees from expressing their opinions.

What makes this case all the more sinister is the fact the Board now wants to apply even more repressive speech controls on medicos.

It is drafting an Orwellian revision to its code of conduct which would use the threat of deregistration to silence dissenting doctors who speak out — or even silently retweet — on contentious topics from euthanasia to gender reassignment in children.

Of particular concern to doctors is section 2.1 of the draft code: “you need to acknowledge and consider the effect of your comments and actions outside work, including online, on your professional standing and on the reputation of the profession. If making public comment, you should acknowledge the profession’s generally accepted views and indicate when your personal opinion differs. Behaviour which could undermine community trust in the profession … may be considered unprofessional.”

As one group of concerned doctors wrote in a submission to the Board:

“This paragraph can be used against free speech and free debate... Great advances in medicine and social action have been made as a result of doctors ‘going against the flow’.”

Whitehall advises instead a compassionate “watch and wait” approach which usually sees dysphoria disappear through puberty. The child often turns out simply to be homosexual.

Dr Whitehall points out that the medical consensus also once was for frontal lobotomies, performed with just as little scientific evidence.

Eugenics was the medical consensus mid-last century, when mentally ill and disabled people were sterilised to eradicate their genes.

“If doctors had spoken out more vociferously, the eugenics program in America may not have been so widespread,” he says.

Through history, dissident doctors opposed to the medical consensus have advanced science.

In the 19th Century, Hungarian doctor Ignaz Semmelweis hypothesised that new mothers were dying of childbed fever in his Vienna hospital because doctors weren’t washing their hands. He asked them to clean their hands with chlorine before attending childbirths and the rate of childbed fever plummeted.

But the doctors didn’t like being blamed so they sacked Semmelweis and he ended up in a mental asylum. Today we know he was right. Hand-washing prevents the spread of disease.

You don’t have to agree with dissident doctors, but no-one has the right to silence them under threat of serious legal sanctions.

“The Board must not be allowed to give itself extra powers to censor and intimidate doctors who do not share its worldview,” says van Gend.

Health Minister Greg Hunt should tell the Board to stick to “regulating the medical competence of doctors, not their political correctness”.

Amen. Submissions about the medical code can be made by the public via the AHPRA website. The deadline is Friday. If you value free speech, get cracking.