This was the election where the woke snake swallowed its tail.

The like-for-like replacement of “modern Liberals” with “Teals”, who believe exactly the same woke things, appears an own goal.

Wouldn’t it have been better if they targeted their ideological enemies instead of their fellow travellers?

But this is where the snake has outsmarted conservatives, yet again.

Far from swallowing its own tail, it has the Liberal Party in a python squeeze.

By taking out the wokest Liberals, the party is now fighting a debilitating internal war for its soul.

Meanwhile outgoing Liberal member for North Sydney, Trent Zimmerman, has posted on social media a picture of his “happiest day in Parliament”.

Draped in the flag of the radical LGBTIQA+ political movement – a flag that says, among other things, mothers are “chest feeders” and “birthing persons” – Zimmerman is applauding the passing of the redefinition of marriage in law. 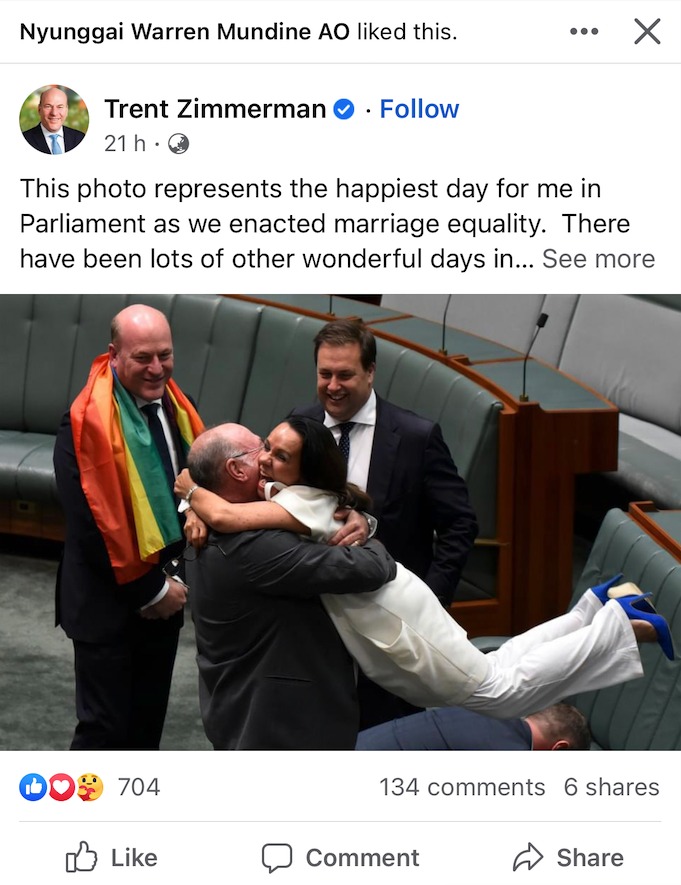 Labor’s Linda Burney is hugging the Liberals’ Warren Entsch while another Liberal, Jason Falinski, who also lost to a Teal, looks on.

This image goes to the heart of the Liberal party’s problems and why a political home is necessary for people who know the family and freedom must be fought for.

It was Zimmerman and other rebel Liberals who sided with Labor in 2017 to get their way on same-sex marriage.

When change was finally enacted, Zimmerman led the charge against reasonable amendments in the Parliament which would have provided for freedom of speech and religion for those who held to the timeless view of marriage.

It demands that children are taught harmful gender-fluid ideology at school.

It demands that anyone who dissents be hauled before human rights commissions and tribunals, as I have been.

The rainbow flag is a million miles from the values of the founder of the Liberal Party, Sir Robert Menzies.

While Zimmerman and five of his woke buddies are gone, it makes no difference to the ideological make-up of the Parliament. Their Teal replacements also believe people with penises can be women and compete in their sports.

But the Teals will have the last laugh as they watch the Liberals now fight over whether their party should also cross this rainbow Rubicon or move back to the mainstream.