The “cruel lie” at the heart of drag queen story time

The “cruel lie” at the heart of drag queen story time

“I could never have a real penis.” – Kiera Bell

British woman Kiera Bell shot to global fame after she sued her gender clinic for plying her with puberty blockers and cross sex hormones as a child.

Now she is an expert witness in my free speech case against two LGBTIQA+ drag queens who are suing me for saying they are dangerous role models for children.

At age 20, Kiera (pictured) had her breasts cut off so she could complete her “transition” from woman to man. 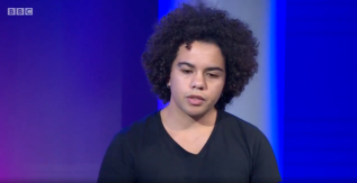 She now bitterly regrets heading down this path as a 15-year-old under the guidance of the Tavistock centre in London.

My lawyers at the Human Rights Law Alliance approached Kiera and she has kindly provided a seven-page statement to the Queensland Civil and Administrative Tribunal in support of my case.

In it she shares her harrowing story of thinking that changing her gender would somehow fix “deep rooted” issues from her childhood – a childhood which included her parents’ divorce at age five, no female role model and teasing and bullying from other kids about her looks.

“Gender dysphoria is a very troubling condition and patients should be dealt with sensitively but also appropriately”, she writes.

“Allowing a teenager to either believe they are the opposite sex or that they will become that is a cruel lie.”

She says she should have been given therapy, not drugs – the side effects she still feels.

(At the behest of LGBTIQA+ activists, Queensland, the ACT and Victoria recently criminalised therapy that does not affirm a child’s gender confusion).

I landed in legal trouble for criticising a LGBTIQA+ drag queen story time event at a Brisbane City Council library in January of 2020.

Two gender-fluid drag queens were reading to little children and I wrote on my blog that these were dangerous role models, something I stand by.

Like Kiera, the children were simply presented with the idea of gender fluidity as a self-evident good but not told of the dangers.

“I could never have a real penis.”

Kiera won her case in the United Kingdom High Court with the court agreeing that a child was not in any position to provide informed consent to puberty blockers.

However, the Tavistock clinic appealed and won, with the appeal court saying treatment of children should be decided by medical experts, not the courts.

The win turned on a legal technicality that did not change the notion that children cannot give informed consent to treatments designed to attempt to change their gender.

Kiera is appealing Tavistock’s win so her battle for justice continues.

My motivation in writing about drag queen story time, facilitated by Brisbane’s ratepayers, was to warn children and parents that the LGBTIQA+ world of gender fluidity is not all rainbows and unicorns.

If anyone doubts this, they should read Kiera Bell’s expert witness statement in Johnny Valkyrie and Dwayne Hill versus Lyle Shelton in the QCAT.

My case, and others like it, make a mockery of Prime Minister Scott Morrison’s assertion yesterday that Australia is a land of free speech.

I’ve already spent $70,000 on lawyers’ fees (thanks to generous crowd funding), been dragged before two compulsory “conciliations” where I refused to kiss the rainbow ring and there is no end to the legal nightmare in sight.

“Well, I’m not going to sell out Australia’s free speech. It’s never going to happen,” Morrison told the media in the face of pressure from the Chinese Communist Party.

The trouble is our politicians long ago sold-out free speech to the LGBTIQA+ political lobby through flawed anti-discrimination laws which have been further weaponised through the passing of same-sex marriage law.

“Australia is a free country where you can speak your mind and under our government you can be very sure that will be retained and always stood up for in whatever form is necessary.”

Sadly, none of that is true.

It’s easier for the PM to stand up to the CCP than to the LGBTIQA+.