This pathway to totalitarianism must be reversed

“Diversity” and “inclusion” have come to mean that anyone who does not bow to a politically correct view of the world should be excluded.

The idea that we are all sinners and unless we repent we will go to Hell is not new.

The idea that homosexual practice - along with lying, cheating, not honouring parents etc etc - is sinful is also not new. 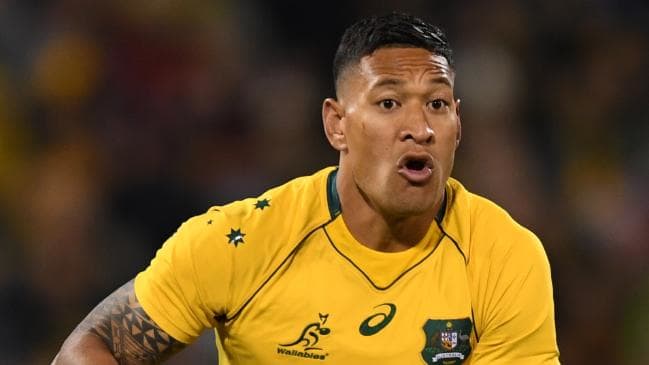 People don’t have to agree that sin is a thing and many Australians don’t.

But we have always been tolerant and accepting of the right of Christians, Jews and Muslims to hold and promote their view of human flourishing.

But suddenly we now have a politically powerful identity group that will not tolerate anyone failing to affirm its view of the world. “Diversity” and “inclusion” are used to exclude and punish.

This is the deal. It is not good enough to merely tolerate the worldview that flies under the rainbow political flag, one must genuflect and salute. Or else.

It was chilling to read in today’s The Australian an interpretation of Qantas’ diversity and inclusion policy by Rugby Australia head Raelene Castle.

“…Alan Joyce is very clear they have an inclusion policy — it is about every one of their employees living towards that,” she said. “That’s fundamentally what a sport like rugby has to be.”

She said this after announcing that Israel Folau would not be officially sanctioned for answering a question on social media about the Christian view of the eternal state of unrepentant sinners.

Clearly Castle is torn and several sponsors, including Qantas, are not happy that Folau has not been punished.

His piece on the Players Voice website yesterday was honest, compassionate and courageous. He enunciates the classic Christian position on sin and grace.

Yet this is not enough for the “inclusivity” and “diversity” commissars who seem hell bent on de-authorising Christianity itself and punishing those who have the temerity to promote its ideas in public.

The crazy thing about Qantas’ “diversity” policy and those adopted by so many other corporates who have been manipulated by the rainbow political movement is that it assumes disagreement is exclusion.

When did disagreeing with someone’s religion, view of sexuality or politics automatically come to mean exclusion? And that punishment must follow?

The contradiction in all this is that diversity now actually means conformity.

Freedom should mean that people are free to hold different views. But not in Alan Joyce’s Qantas and the Australia he is seeking to shape from his rainbow flight deck.

Australian Conservatives leader Cory Bernardi was also asked to weigh in and summed the situation up well.

“In a world where it seems compulsory to support people choosing their own gender, sexuality, skin colour and ethnicity — the only unacceptable choice is to support Christian values in the public square.

“Good on Israel Folau for having the courage of his convictions and not bowing his head to the corporate spear-tackle,” Senator Bernardi said.

Of course no one should be demonised for any reason and I accept that in the past same-sex attracted people were demonised and punished by society and by Christian people.

In my own imperfect way, I tried to offer some sort of conciliation by way of a public apology for this when I spoke at the National Press Club last year.

But tolerance and pluralism should mean that we are tolerant of different views and pluralistic enough to allow space for those views to be considered.

It is sad that the mis-named Australian Human Rights Commission does not support the human rights of freedom of speech and freedom of religion.

One of its commissioners, Ed Santow, offered counselling to Folau for his views.

The AHRC’s Tasmanian counterpart dragged a Catholic minister before its tribunal for teaching Catholics Catholic teaching on marriage.

It is hard to believe this is happening in modern Australia and it is a trend that must be reversed.

Communist countries in the 20thcentury used to send people away for re-education. Many never came back.

In free societies, worldviews and their ideas for public policy should be allowed to be battled out in public so the democratic polity can settle on the best.

Punishing, slurring and excluding people for their ideas, rather than engaging with their ideas, is the pathway to totalitarianism.

The history of the 20thCentury should tell us that we don’t want to go back there.