Scott Morrison will introduce a religious discrimination bill into federal Parliament tomorrow. Will it make a difference?

It is currently okay for a transgender political activist to vilify me as a “hateful bigot” (which I’m not) but if I say genderfluid drag queens indoctrinating children are “dangerous role models” I get hauled before a government commission.

We need to keep this in mind as Labor and the “modern Liberals” go into overdrive to kill off the Morrison Government’s attempt to re-balance freedoms in the wake of the same-sex marriage debate.

The reality is that freedom of religion and freedom of speech have been lost over decades through creeping anti-free speech anti-discrimination laws at state and federal level.

It’s been death by a thousand cuts, or amendments.

Section 18C of the federal Racial Discrimination Act is the most famous because the Abbott Government had a good go at removing subjective clauses which allow people with hurt feelings to sue.

A severe backlash from woke cultural elites and the mainstream media forced Abbott into retreat and the law was never reformed so free speech could be restored.

Speech inciting violence should obviously be outlawed. But how is “vilification” and “hatred” defined and policed?

Similar 18C-type subjective clauses exist in other state and federal anti-discrimination instruments making freedom of speech and religion a minefield for anyone challenging elite orthodoxy on gender, sexual identity and race.

Tasmania’s law is the worst because “offence” is all that’s needed for an upset activist to embroil a fellow citizen in years of litigation.

I’ve just been forced to attend two compulsory “conciliations” and spend $70,000 in legal fees with no end of my legal nightmare in sight after almost two years of process as punishment.

Why? Because two LGBTIQA+ drag queens lodged a complaint with the Queensland Human Rights Commission alleging vilification and incitement of hatred because I said they were dangerous role models for children.

Both promoted genderfluid ideology, which has harmful outcomes, and one was an advocate for the pornography industry.

Seeking to protect children by warning their parents about Drag Queen Story Time being given pride of place in council libraries is apparently “hate speech”.

I’m unsure whether the Religious Discrimination Bill Prime Minister Scott Morrison introduces to Parliament tomorrow will protect people like me.

I’m sure the “modern Liberals” will be doing all they can to make sure the bill impacts as little as possible on flawed anti-discrimination law as it is shunted off to a Senate Inquiry for further watering down.

But what’s concerning about the debate is the mainstream media’s mischaracterisation of what is sought.

According to a headline in today’s Australian, the bill is now about protecting gay children.

The same-sex marriage campaign, which morphed into a well-funded standing political advocacy machine after it won the 2017 plebiscite, has characterised the religious freedoms debate as a crusade to beat up on gays.

Nothing could be further from the truth but Equality Australia’s television advertisement is powerful propaganda. 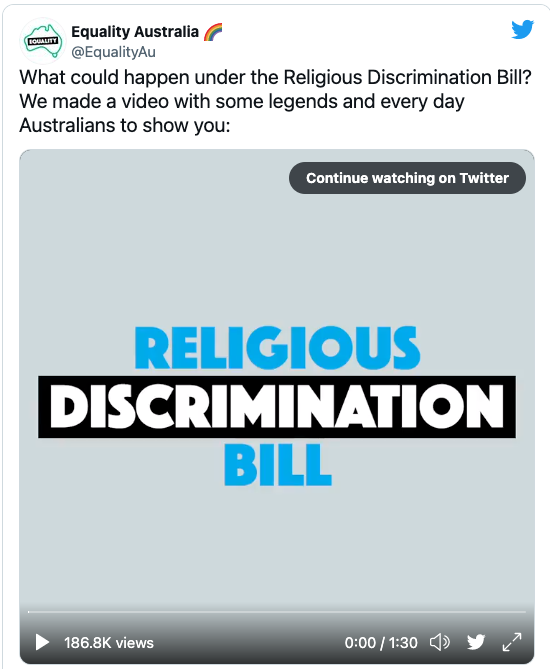 All that is sought by faith organisations is the freedom to preserve and promote their ethos. Yes, it’s an ethos that clashes with LGBTIQA+ prescriptions for marriage, family and gender. But why can’t we have diversity?

That means being free to employ staff who support the idea of marriage between one man and one woman and the scientific view of gender and to decline employment to those who don’t.

Christian people want to be free to preach the Bible’s vision of human flourishing, even if it is controversial in the way Israel Folau expressed it.

But alas, the “modern Liberals” killed the “Folau clause” in the bill.

Will their watering down of the bill to “protect gay kids” mean that Christian and Muslim schools have to put up with boys taking their boyfriends to the school formal in defiance of the school community’s wishes?

Does it mean that a year 12 boy identifying as a girl can’t be disciplined for entering the girls’ toilet at school?

Media reports breathlessly label the bill “controversial”. Yet it’s the so-called “moderates” who think forcing schools to destroy girls’ sport by allowing boys who identify as girls to compete with girls who are the true radicals.

Sadly it seems the Morrison Government’s religious discrimination bill will do little more than protect statements of religious belief without but will not take away the possibility of an activist feeling “vilified” and therefore able to initiate legal action through a kangaroo commission for so-called equal opportunities.

Institutions may be allowed to retain some freedom in hiring staff but the provisions, as reported so far, look anaemic.

No one expects political parties to employ people who are opposed to their ethos, yet even under the religious discrimination bill it will be difficult for religious organisations to exercise the same freedom.

Sadly the LGBTIQA+ political activists are well-funded, have the ear of the media and cultural elites and have no intention of allowing plurality to exist. Everyone must bow to their ideology, even within private organisations. RIP freedom of association.

Retired American Roman Catholic Archbishop Charles Chaput, one of my favourite authors, sums up in his latest book Things Worth Dying For why Christians shouldn’t expect freedom of religion and speech to return any time soon.

"As believers we can expect a difficult road in the years ahead on a whole range of issues. There can be no concordat between the Christian understanding of human identity, dignity, and sexuality and the contempt directed at our beliefs by so much of our emerging culture. The world and its hatreds won't allow it."

This explains why what Morrison presents tomorrow will be of little effect.

Lyle Shelton is Director of Campaigns and Communication at the Christian Democratic Party. To keep in touch with the CDP, please sign-up here.