Why violence gets a leave pass

Things are getting serious.

“It’s hard to believe” is a phrase that transits my mind regularly.

I marvel and despair at what is becoming of us.

Almost every day there are whacky news stories from at home and abroad about the march of transgenderism.

The latest was in The Weekend Australian. Violence, it reported, seems to be stock-in-trade of radical trans activists. And they are getting away with it.

Transgenderism is a phenomenon that demands we all affirm and celebrate a person who decides to change their gender, regardless of how old they are.

Failure to kowtow to a man identifying as a woman or vice versa is to be a bigot. The same applies to a little boy or girl who feels like they have been born in the wrong body.

Only bad people push back. Bad parents do.

Those who’ve followed me in recent years will know pushing back on this nonsense has been a feature of my social media and mainstream media comment.

It doesn't mean I am not lacking compassion or respect for people who genuinely struggle with gender dysphoria. But I don't support upending biology and social norms while indoctrinating children into a brave new gender-fluid world.

During the 2017 marriage debate colleagues and I warned that de-gendering marriage would embolden transgender activists and it has.

The latest example was The Weekend Australian's reporting  from Canada that a self-described left-wing commentator, who happens to believe boys are boys and girls are girls, is being de-platformed from universities and is regularly threatened with violence by radical trans activists.

Canadian feminist Meghan Murphy goes no-where without a bodyguard. She has been banned from Twitter for “hurtful pronoun” use. 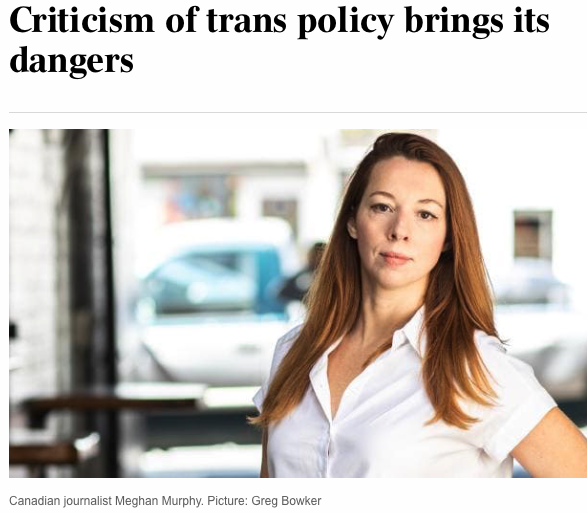 “It’s one thing to live your life the way you want, it’s another thing if you’re going to start forcing people to say you’re literally female when you’re male and that means you should be allowed to enter women’s and girls’ spaces (such as toilets, change rooms, shelters, refuges or prisons),” she told The Weekend Australian.

“It’s a terrible precedent to say that if you threaten violence, then you’ll get your way," Murphy said.

But that’s what the left do and the voices from the left condemning the violent threats issued by their compatriots are few.

All hell broke out at the suggestion of a book on this topic and after years of delay and legal wrangling, it has now been published.

This is a rare victory for free speech in the LGBTIQA+ space.

The average person watching this has got to be asking questions about the rainbow political movement which campaigned for a redefinition of marriage on the mantras of love and tolerance but now uses violence and intolerance to silence alternative views.

While I never had a bodyguard during my time as a campaigner for man-woman marriage, my office was bombed by a gay activist and my home address was placed on the internet by another gay activist.

My board installed video surveillance equipment at my house to protect my family.

Rainbow activists will stop at nothing to silence dissent.

The loss of truth about gender and the legal enforcement of rainbow ideology from pre-school to the aged-care home is just around the corner.

For most mainstream Australians this is all so whacky it is hard to believe. Few are taking it seriously.

And that’s why the activists are getting away with it.