Why almost everything you are told about climate change is wrong

John Anderson and Bjorn Lomborg have a rational discussion on climate change.

The sheer futility and unnecessary economic self-harm of the climate policies demanded by the green-left was laid bare in this discussion uploaded on former Deputy Prime Minister John Anderson’s YouTube channel yesterday.

If only Anthony Albanese and his Labor Shadow Cabinet had watched this before they announced their "zero emissions by 2050" policy.

It could have saved them from political oblivion, assuming they are open to reason.

The latest of Anderson’s “Conversations” is with the US-based environmentalist Bjorn Lomborg, who has long-advocated that the answer to climate change is to develop and prove fossil fuel replacement technology first, rather than the current demand to rush into fear-driven deep and uncosted cuts to emissions. 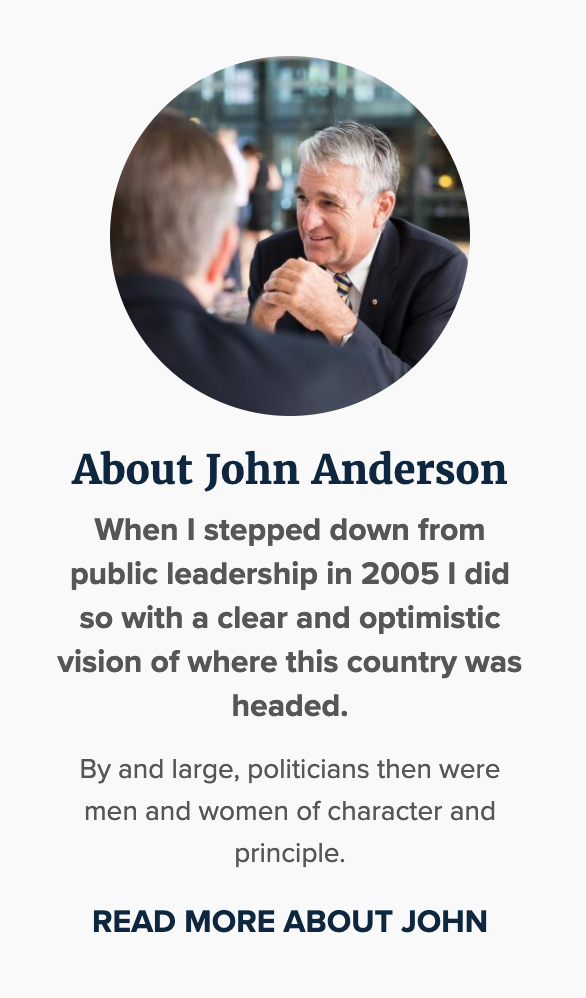 Lomborg, whose ideas are not new to regular readers of The Australian, is not taken seriously in the mainstream climate debate.

Anderson’s interview has Lomborg exposing the media’s lies about the current bushfire season and the false hope it preaches that taking “climate action” will allow our economy to continue to function.

The costs of the warming alarmist camp’s current policy demands, which Labor has signed on to without costing, are impossible to meet, Lomborg shows.

On the bushfires, he demolishes the media-driven narrative that what Australia just experienced was “unprecedented” and caused by global warming.

“Bushfires have declined dramatically in Australia over the last 120 years,” Lomborg tells Anderson.

In 1900, 11 percent of Australia burned in summer bushfires compared to a little less than four percent during this current bushfire season. These figures, Lomborg says are based on a combination of accurate historical records, satellite mapping and figures produced by The Guardian newspaper. 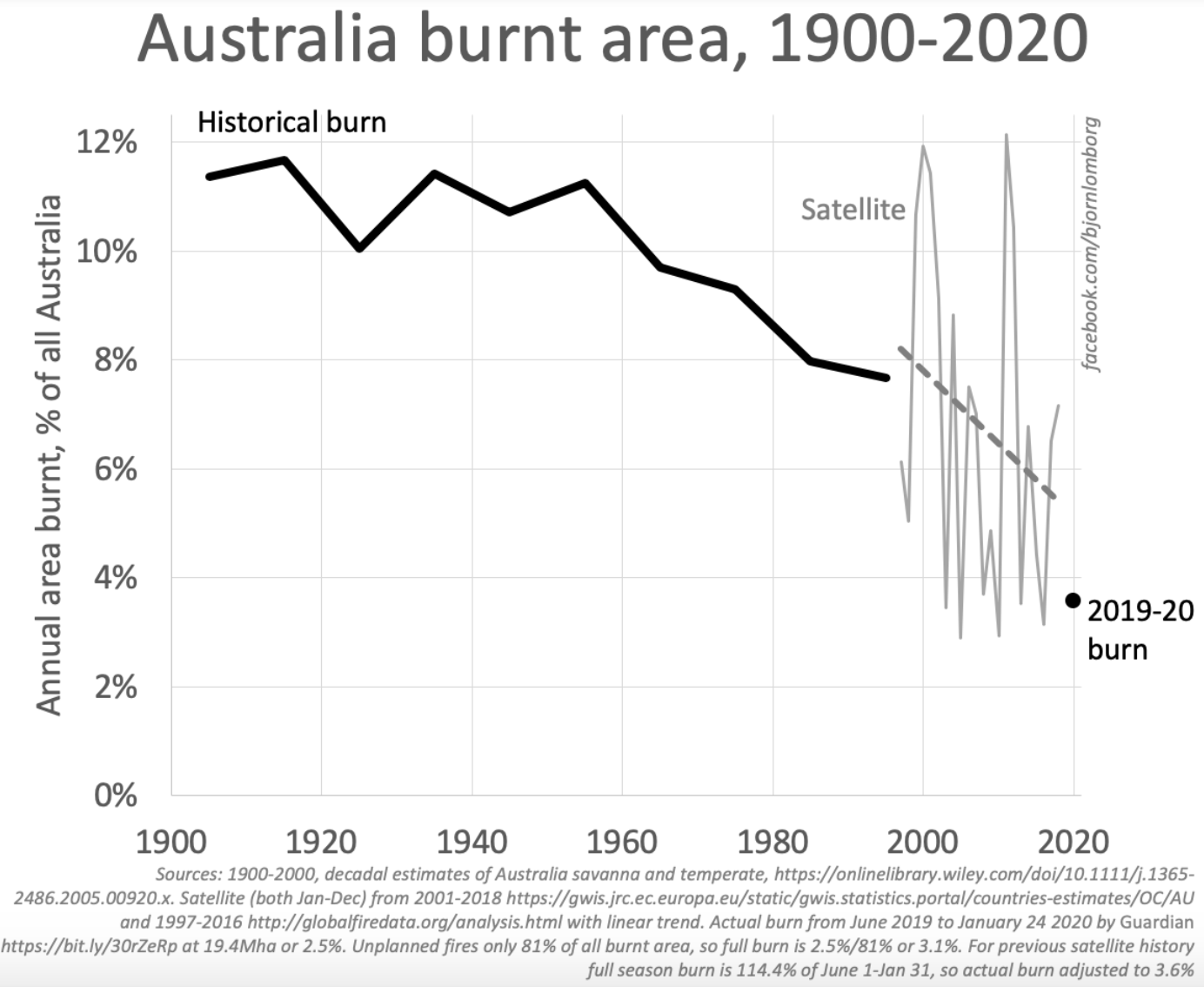 “That is not to say the fires were not exceptional in Victoria and NSW. It is where a lot of people live but it is also where a lot of cameras live,” Lomborg says.

“It’s great TV by any standards but it’s not great to inform you.”

Lomborg believes global warming will increase bushfires but not back to the levels where they burned 11 percent of Australia at the turn of the 20th century.

He says scientific models show that climate change-driven bushfires in the future would occur throughout the whole nation except for the tropical savannah regions of the Northern Territory.

“If you look at the models for Australia we estimate that 5.3 percent is burning (in an average year) right now. By the end of the century - because of global warming if we don’t do anything - we’ll probably have about six per cent burnt every year.

“That is 0.7 percentage points more every year.

“That is definitely a problem, it is something we should talk about - how we can avoid that.

“But if Australia went totally carbon neutral for the rest of the century – and remember this would have an enormous cost - it is almost unfathomable that it would be possible.

“If you managed that amazing feat, instead of seeing six percent burned by the end of the century you would see 5.997 percent burned.

“Even in 80 years time you would not be able to tell the difference from this fantastically costly policy.

“There is something fundamentally wrong about the way we say ‘here’s a problem, let’s fix it by cutting carbon emissions’.”

There goes the Labor-Greens strategy up in flames.

Lomborg advocates modest cuts to emissions but ones that don’t involve causing economic hardship until green energy technology catches up.

It seems that this is the path Scott Morrison is trying to navigate amid the hysterical and irrational media and elite blaming of the government for the bushfires.

With Labor announcing its zero emissions by 2050 policy yesterday, the uploading of the Anderson-Lomborg conversation couldn’t have been more timely.

Lomborg has followed New Zealand’s move down the same track.

Unlike Albo’s Australian Labor, the New Zealand Labour Government of Jacinta Ardern asked the New Zealand Institute of Economic Research to estimate how much zero by 2050 would cost.

The results are staggering.

Getting New Zealand emissions neutral by 2050 and then maintaining that until 2100 will cost 16 per cent of GDP or $5 trillion US dollars.

“If you run a climate model with and without New Zealand, the impact, the difference, is that they will cut temperatures by the end of the century by four one thousandth of a degree.

“They basically postponed global warming by about three weeks by the end of the century.

“Most people don’t want to spend $5 trillion dollars doing that.”

This makes a mockery of Penny Wong’s contention that the cost of “not acting” is greater than the cost of “acting”.

Wong doesn’t even know the cost for Australia of what she preaches.

Anderson and Lomborg conclude their conversation agreeing that people in Europe and countries like Australia and New Zealand ultimately will not follow politicians as these sorts of costs start to bite.

Already the yellow vest movement in Paris is testament to this.

They agree that countries like China and India will not cut emissions if that means compromising poverty-alleviating economic growth.

Lomborg says the answers to global warming lie in breakthrough technology and that’s where government’s should be investing.

Solving global warming does not have to involve hurting the rich and preventing the poor from becoming rich, Lomborg contends.

Wind and solar, which can’t provide baseload power and account for just one percent of global energy generation (despite trillions of dollars of taxpayers money thrown at them over the past two decades), are not the answer.

The enemies of the type of rational discussion on climate change Australia needs, as witnessed by this conversation, are the Greens, Labor, “modern Liberals” and most of our mainstream media.

The warming debate needs to cool down and take a rational, Lomborg-style cost-benefit approach.