The Wiggles, once a safe haven for children, is now indoctrinating them into harmful LGBTIQA+ ideology, confusing them about whether they are boys or girls.

A “non-binary” unicorn, Shirley Shawn, has been added to the phenomenally popular children’s entertainment group in the name of “diversity”. 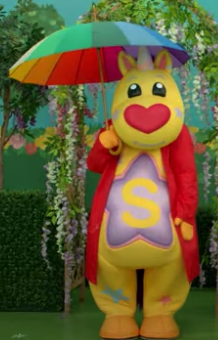 Shirley Shawn appeared in a 2020 YouTube video with the Wiggles holding an umbrella in the colours of the rainbow political movement – a movement which teaches children gender is fluid, mothers are to now be referred as “birth parents” and that breast feeding must be replaced by “chest feeding” to accommodate “men who give birth”.

As well as the non-binary characters, the Wiggles added four new humans to its cast representing Australians of different ethnic backgrounds.

That aspect of the changes to the line-up is of course laudable.

Announcing the changes, Wiggles major shareholder and Blue Wiggle Anthony Field AM said in a statement: “As society has evolved, we have embraced the need for diversity and inclusiveness and want children all over the world to see themselves reflected on the screen.”

Most parents would not agree that teaching children that their gender is fluid is a good idea.

Too many children have been put on a path towards puberty blockers, cross sex hormones and surgery, with experts expressing grave concern about the activities of children’s gender clinics.

Please send a message to the Wiggles: Stop indoctrinating our children! Sign the petition today.