“Unethical” to help children be comfortable with their biology

The Australian’s Bernard Lane is one of the few mainstream journalists asking questions.

Almost everyday stories appear in the media about the LGBTIQA+ political movement’s experimental and harmful plans for our children.

Almost everyday most political, religious and civil society leaders are silent. Those who should be watching the gates are not.

No one wants to be labelled a “homophobe”, whatever that is, so it is safer to shut up.

Yesterday in The Australian, Bernard Lane continued to expose the illogical and dangerous agenda of those who are trying to convince children that their biology is not necessarily real.

He’s one of the only mainstream journalists asking questions of the country’s most prominent clinic for helping children change their gender at the Royal Children’s Hospital in Melbourne. The youth gender clinic there is headed by paediatrician Michelle Telfer.

Not that she ever answers Lane's questions.

But after a group of six leading Australian psychiatrists wrote an open letter to the British Medical Journal criticising the RCH youth gender clinic, RCH was drawn into the light.

Lane reports that in response to the psychiatrists’ concerns about children being led down a path of transitioning their gender, RCH doubled down and said it was “unethical” to help a child be comfortable with their biological sex.

Sometimes it’s hard to believe what one is reading.

Royal Children’s believes that the only appropriate treatment for a child who is confused about their gender is “affirmation”.

This means prescribing puberty blockers from as young as 10, cross sex hormones and ultimately irreversible breast or genital surgery.

Puberty blockers are known to affect the limbic system of the brain while cross sex hormones can render a child infertile for life.

Telfer is lobbying the Victorian Government for more money to fund double mastectomies on teenage girls who think they might be boys.

But criticism is rightly growing of LGBTIQA+ ideology with The Times of London recently running a feature article questioning the wisdom of transitioning children from their biological gender.

Yesterday’s Australian provided a graphic detailing the explosion in numbers of children seeking treatment at the RCH. 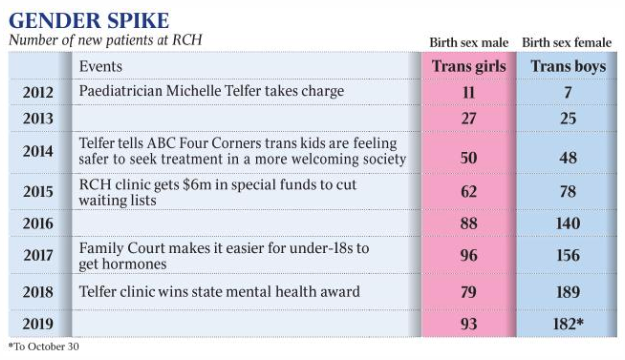 Gender dysphoria in children was extremely rare prior to the mainstreaming of LGBTIQA+ ideas in the the culture and then introduction of "Safe Schools" in 2014.

Other gender clinics around the nation have experienced similar explosions in the growth in numbers of children, particularly girls suffering with mental health issues, seeking help to change their gender.

The psychiatrists who wrote to the BMJ listed social contagion as a result of cultural and peer group influences as a potential reason for the sky-rocketing number of children unhappy with their biology.

Gender clinics like RCH believe it is wrong for doctors and midwives to “assign gender” at birth based on whether or not a baby has a penis or a vagina.

Ignoring that sex is determined at conception, people like Telfer believe what Jo Hirst’s "Safe Schools"-endorsed Gender Fairy story book tells four-year-olds: “Only you know if you are a boy or a girl, no one can tell you”.

Lane rightly refers in his article to this gender theory as a “worldview” because it is not based on science or biology.

Back in 2014 when groups like Australian Christian Lobby, where I worked for 10 years, started pointing out that gender fluid theory was being smuggled into schools through programs like “Safe Schools”, we were ignored and then called bigots.

Gender fluid teaching is now compulsory in most Australian States, with Queensland the latest to sign on to what is now called “Respectful Relationships”.

But debate is starting to rise around the world.

UK Health Minister for Patient Safety, Suicide Prevention and Mental Health, Nadine Dorries, who trained as a nurse, described The Times article as being the “lone voice of reason”.

Here in Queensland, a Labor bill to throw doctors in jail for 18 months if they seek to help a child be comfortable with their biology, was sent back to the drawing board after psychiatrists, paediatricians, lesbians and Christians spoke up.

There are signs the rainbow edifice has serious cracks but I'm not holding my breath that Labor will relent on its radical plan to use brutal force to bring doctors and health practitioners in to line. Pastors will be next.

There is still way too much fear of crossing this powerful political lobby.

And that’s what’s driving the threat to our children. It’s not science or biology, it’s politics and fear.

We have no hope of protecting children from LGBTIQA+ harm while ever leaders lack courage.