It felt like a collective act of defiance against the ABC.

Yesterday I went up the beach in my 1993 Mitsubishi Pajero wagon along with hundreds of other Australia Day revellers.

It was a far cry from the bitter “Invasion Day” rally in Brisbane where speakers yelled “f… change the date, f… the national anthem, f…. the cricket” and “ScoMo is a racist dog” who “preaches white supremacy” (check out the Warriors of the Aboriginal Resistance Facebook page).

Imagine if this rhetoric was deployed at a Trump rally. But I digress.

At Bribie Island multi-cultural brown, yellow and white Australia was too busy for any rancour - enjoying the sun, sand and surf on what was a stunning day.

I don’t want to gloss over legitimate grievance and I’ll circle back.

But yesterday groups of Australians who looked to be of Indian or Sri-Lankan origin lined up in the crowd waiting for the tide to recede before the ranger allowed us to access the beach.

“Hey Pajero man!” a group of Asian Australians in their (older than mine) Pajero called out to me in broken English.

They were trying in vain to air up at the end of the day using a very inadequate cigarette lighter-powered compressor.

I showed them my two-cylinder Kings Thumper. They’ll be off to the 4WD Super Centre to get one before their next outing, I’m sure.

Bogans in old rigs like mine mingled with tradies and professionals in their BT 50s and 79 Series Landcruisers.

Australia Day on the beach was a melting pot of people of diverse racial origin and social status.

Everyone was happy. Despite their differences, everyone felt “one and free”.

What I wasn’t prepared for was the sea of red, white and blue fluttering up and down the beach. 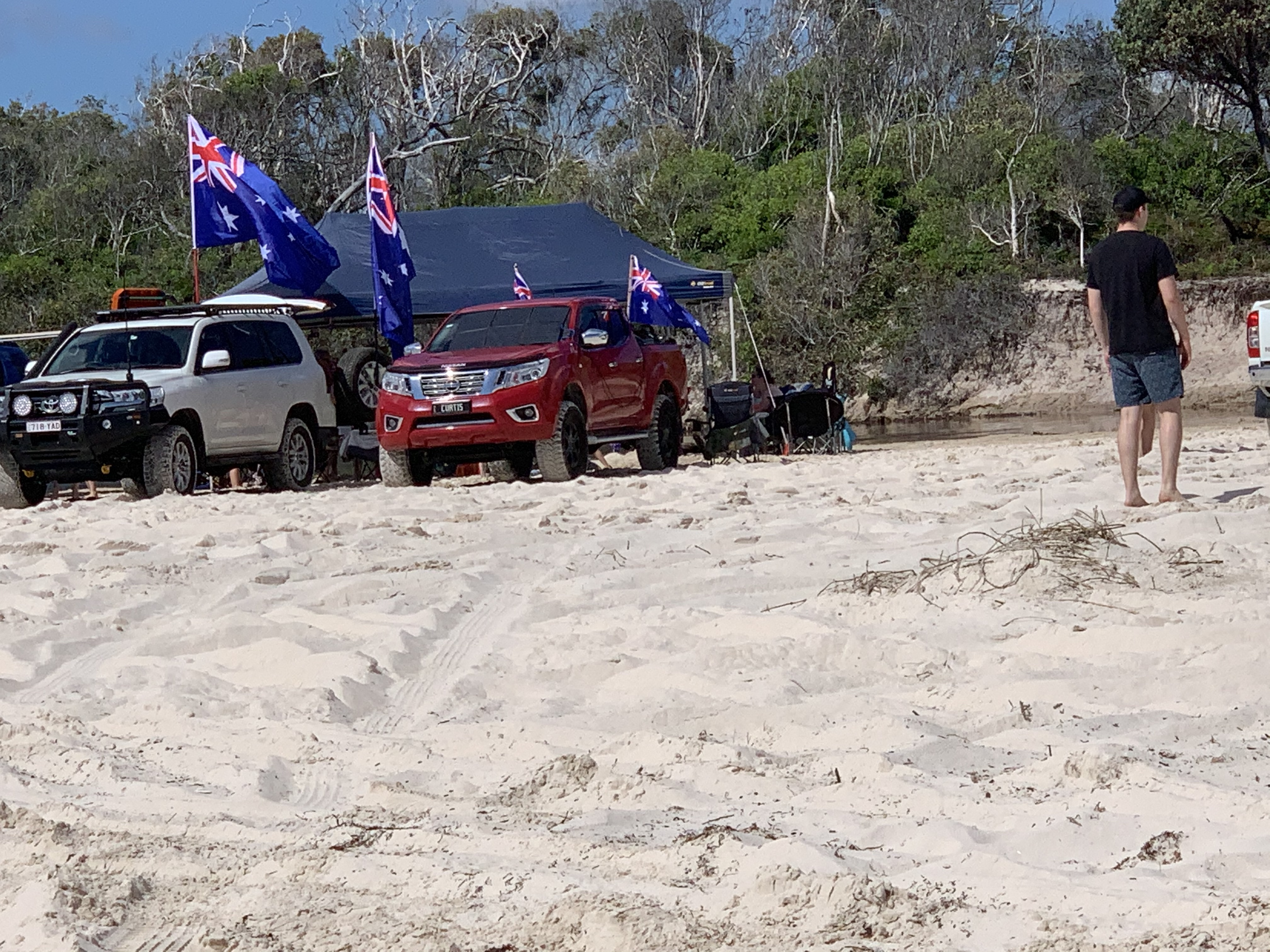 Scores of people proudly displayed Australian flags – large and small - from their vehicles and shade structures.

It felt like a collective act of defiance against the ABC which spent the days leading up to our national day calling it “invasion day” and telling us, patronisingly, we could have a sausage and a beer as long as we remembered the systemic racial injustice that apparently lurks in all of our hearts.

There are of course legitimate issues that remain unresolved about our past.

But someone with a megaphone yelling “every member of his (Scott Morrison’s) Parliament are racist dogs” is not the way to address them.

Sadly the stolen generation apology, billions of dollars per year in assistance to indigenous people and their communities, sorry day and myriad of government programs has failed to move the needle on indigenous disadvantage. This is a national tragedy.

Indigenous leaders like Warren Mundine and Jacinta Price say the answers lie in breaking the dependence on welfare and having indigenous people join the mainstream economy.

That could mean hard choices for people who live in remote communities where there are no mines, agriculture or tourism opportunities,

Going soft on indigenous men who commit crimes of violence against women and children is also not the answer, they say.

Mundine and Price fly in the face of current policy approaches which fail year in, year out.

There is a wound in our nation which can’t be healed by government programs or money.

I wrote about this in my book, I Kid You Not – Notes from 20 Years in the Trenches of the Culture Wars (Connor Court).

My chapter “Forgiveness and Reconciliation” details some of the massacres which occurred near the areas where I grew up on Queensland’s Darling Downs.

While white-on-black violence was of course by far the more prevalent - men, women and children were also killed in instances of black-on-white violence.

While constitutional recognition and a legislated voice to Parliament might be worthwhile measures, true reconciliation can only come from forgiveness. That comes from the heart.

There’s only so much that can be done to right the wrongs of the past. Many attempts have been made and there may well be more to do.

But “invasion day” rancour is not the way. The logic of this is we should give all the land back.

Which of the descendants of the hundreds of pre-colonial era warring tribes should receive what? Where do those of us who now own a plot of "invaded" land go?

Despite their failings, the English did strive to uphold high ideals when they settled Australia.

There are many examples of indigenous people being afforded justice as we journeyed to full equality before the law. The execution by hanging of the white men responsible for the Myall Creek massacre is a case in point.

By the 18th century, it was only a matter of time before a European power claimed Australia and displaced the warring tribes. (Pre-colonial black-on-black violence is well-documented, but that is rarely talked about).

The Australia we celebrated yesterday is arguably the best nation on the planet to be indigenous, inspite our historical faults which I don’t seek to duck.

There will probably always be racist people and that should always be called out. In fact, racial discrimination has been illegal here for decades. Those laws have widespread public support.

But I don’t believe the majority of Australians harbour racism in their hearts or that there is deliberate, systemic racism here.

Piling on “invasion day” guilt every year is only dividing us.

Encouraging everyone, regardless of race, to take advantage of the opportunities modern Australia offers is a big part of the answer.

Bribie Island on Australia Day was testament to the fact many are doing just that.