Anglican bishops put heads of the faithful on pikes

Anglican bishops put heads of the faithful on pikes

The common lament was that our bishops could so willingly abandon orthodoxy and in the face of such a clear majority amongst the church. – Rev David Ould

The Australian’s headline reporting the Anglican’s same-sex marriage vote yesterday was misleading and truthful at the same time.

“Conservatives crushed” implied the General Synod’s meeting on the Gold Coast voted overwhelmingly in accordance with the spirit of the age to overhaul the church’s supposedly outdated view of marriage. 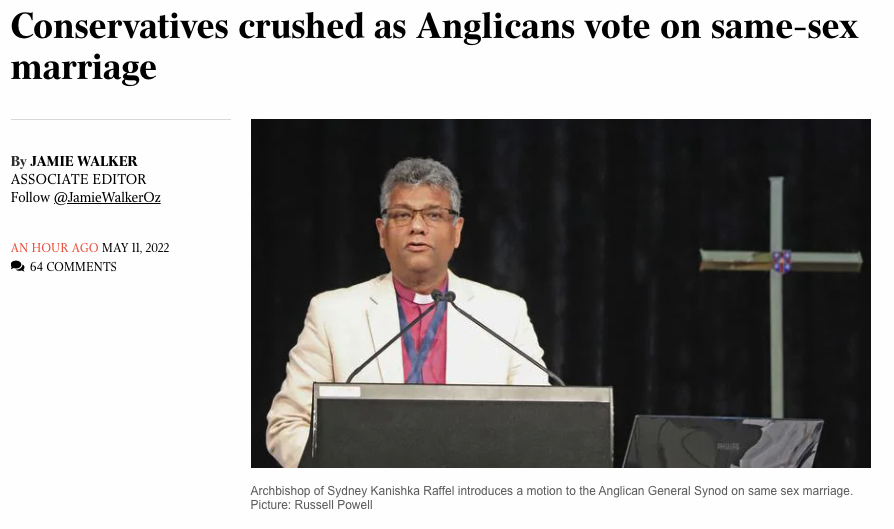 The reality is the overwhelming majority of laity and clergy voted to stick with Jesus Christ’s definition and reject moves to bless same-sex unions.

The General Synod is made up of three voting “houses” – laity, clergy and bishops.

Laity and clergy together voted 133 to 86 to stay faithful to Christian marriage but bishops voted 12-10 to veto them, with two bishops abstaining.

Redefining marriage has always been a project of elites.

What is not now known is whether this will split the Anglican church in Australia as it has in the United States, Canada and New Zealand.

The Archbishop of Sydney, Kanishka Raffel, who led the charge to stay faithful, said: “I can tell you I have had people approach me saying they would leave, but I have exhorted them not to.”

Brisbane Bishop Jonathan Holland tried to justify redefining marriage by implying the Bible has been misinterpreted for 2000 years.

“When we see two people in love, whether that’s a man and woman as is most commonly the case, or two men and two women, that love is reciprocal, it’s intimate and nurturing, the context is permanency and exclusiveness as in marriage … who are we to say that they are not fulfilling the teaching of Jesus and his ruling principle of love?” he said.

The problem with that line of argument is why does it not apply to relationships with more than two people who love each other.

Is it not now bigotry to deny a church blessing to non-conventional forms so long as love is the criteria?

Where does it end?

Holland’s line of argument also excludes the rights of children to, wherever possible, know the love and nurture of their biological mother and father, something impossible from a same-sex relationship.

Of course two men can love a child, but they can’t be his or her mother. Neither can lesbians provide fatherhood to a child.

None of the media reports indicated that the General Synod discussed anything other than the rights of adults.

Does the Anglican church now support commercial surrogacy, a key demand of the same-sex marriage lobby, so two men can have the benefits of “marriage equality” by renting women’s wombs and establishing a cash market in babies?

If the Anglican church is supporting the de-gendering of marriage, where does it stand on teaching children that gender is fluid, not something one is born with?

From the synod, David Ould, the senior associate minister at St John’s Anglican Cathedral at  Parramatta, wrote eloquently: “The common lament was that our bishops could so willingly abandon orthodoxy and in the face of such a clear majority amongst the church”.

When part of the Christian church departs from orthodoxy, we should lament. It is serious.

The Anglican church in Australia, like the Uniting Church, has crossed a Rubicon.

These churches have failed to realise that the Christian church has always been counter-cultural.

John the Baptist was in prison and ultimately beheaded because he told King Herod his definition of marriage was wrong.

John Fisher and Sir Thomas More stood up to King Henry VIII, ironically the founder of the Anglican Church, over his insistence on messing with church teaching on marriage. Their heads were placed on pikes on London Bridge, Fisher’s was eventually thrown into the Thames.

However, this reporting by The Australian further explains the line of thinking that led a minority of powerful bishops to crush the majority will of the faithful.

Speaking against the statement (for man-woman marriage) ahead of Wednesday’s vote, vicar Shane Hubner of St Peters Anglican Church, Box Hill, in Melbourne’s east, said the notion that marriage was the union of a man and woman was “deeply painful” for him to accept when he had two gay siblings.

Emotivism is the new logic. Again, the trouble with this line of argument is that we all have relatives and people we love who choose not to conform to the teachings of Jesus.

We should neither abandon them nor abandon Christ.

If we are honest, we all struggle in many ways but the challenge of faith is not to give in but to find the grace of Jesus to continually be conformed to his image. We all have our cross to bear.

That’s known as sanctification. We are to be sanctified by Christ through faith. The world is not to sanctify us through capitulation to its trends.

It’s one thing for corporates like Qantas to go woke, but five years on from same-sex marriage becoming law, the rainbow political movement has claimed its biggest cultural scalp – the second largest Christian denomination in Australia.

Will the rest of the Australian church be found faithful?

Is it willing to pay the price of being out of step with an increasingly hostile culture and legal system?

At an individual level, these are also questions every faithful believer in Jesus Christ must now face.