Back same-sex marriage or lose govt funds, say US Dems

“There can be no reward, no benefit, no tax break for anyone”…who does not support gay marriage.

Today at a Democratic presidential candidate forum in the United States, we gained a glimpse into the future of what life will be like for anyone who does not agree with same-sex marriage.

It is not one of tolerance and diversity. It will be a harder life for you and for any children you have who wish to remain faithful mainstream values.

If Donald Trump loses the 2020 election, Christian schools, charities, churches and other faith-based organisations will lose their tax-free status and any government grants they might receive for doing good works.

Nine candidates were speaking at a LGBTQ “town hall” meeting convened by the news network CNN.

All of the others, including front-runner Elizabeth Warren, said ‘yes’ to every demand made of them by the LGBTIQ political activists.

He went on to say: "There can be no reward, no benefit, no tax break for anyone ... that denies the full human rights and the full civil rights of every single one of us." 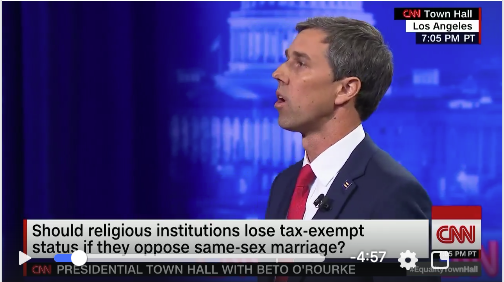 Candidate after candidate lined up to pillory religion, particularly Christianity, for not supporting the new definition of marriage or transgenderism.

Now it is of course a nonsense to suggest that disagreement over marriage and biological science means that Christians are denying peoples’ human rights.

But that is how confused and toxic the debate has become.

When the Democrats win power again, whether that is in 2020 or sometime in the future, there will be a crackdown on Christian organisations and their funding models.

Australians who think all this madness is for the “only in America file” should think again.

America has led in the promotion of the LGBTIQ political agenda and what happens there generally washes back here within a couple of years.

There is no doubt in my mind that Australian Labor and many in the Liberal party will adopt the same PC, identity politics approach.

Now this of course is not the end of the world. Christians don’t need tax breaks or government funds to do good or to run schools. They don’t need the law of the land to be on their side to maintain a faithful witness to the truth.

But these things sure help.

If policy is going to change, it would be wise for the boards of Christian organisations to begin planning for a future where they are singled out for financial discrimination because of their beliefs on marriage and gender.

Parents of children at Christian schools which receive government funding will need to be prepared to pay higher fees. Or home school.

While it would be prudent to begin planning now, what would be more prudent is for Christians to become politically and culturally active.

We have to do better at making the case that we are not a threat to anyone else’s legitimate human rights.

We have to do better in engaging the public debate over rainbow politics. Their agenda was never going to end with the marriage plebiscite, that was just the beginning.

Their agenda actually is the one that infringes human rights, especially those of babies who are taken from natural parents and given to same-sex couples to suit their lifestyle choices.

Resisting the injustice to women and children of commercial surrogacy for gay men is a coming battle.

The transgender push to indoctrinate children at school is one of the most dangerous spin-offs of the same-sex marriage debate. It still has a long way to play out and has not receded just because Scott Morrison is in the Lodge.

Now is not a time for silence or going back to sleep.

We can’t rely on a Christian Prime Minister to do the heavy lifting.

His sports minister, Senator Richard Colbeck is clueless about how dangerous the rainbow agenda is and he showed this by issuing gender fluid transgender guidelines to junior sporting clubs.

It remains a mystery why the PM has not overruled this reckless and harmful directive made in his government’s name. It is a directive that is a blow to women’s and girls’ sport.

Sadly, Liberals and Nationals MPs are helping the anti-freedom and anti-biology LGBTIQ political movement by working with their parliamentary advocacy group. The Left make their best gains with the help of what Vladimir Lenin called “useful idiots”.

If we want a future where all Australians are free to hold their beliefs about marriage and not have their organisations penalised through the tax system or lose government grants, we had better get active.

If we want free speech in the future, we had better get active.

Today’s Democratic Party presidential candidates have given us a glimpse of where things may well end up.

Here’s a summary of the forum from CNN https://edition.cnn.com/2019/10/11/politics/cnn-lgbtq-equality-town-hall-takeaways/index.html.