Common ground in the fight against rainbow fascism

Common ground in the fight against rainbow fascism

Rainbow fascism has only been emboldened since winning its campaign to strip gender diversity from the meaning of marriage.

The latest victim is the left-leaning Feminist Legal Clinic in Sydney which is being frog-marched out of its offices because it has stood up for the rights of girls and women in the face of militant transgender demands.

The charity clinic, which supports women suffering from domestic violence and navigating the Family Court, was provided rent-free accommodation under a Sydney City Council grants program.

The Council voted to terminate their lease and they must be out today. 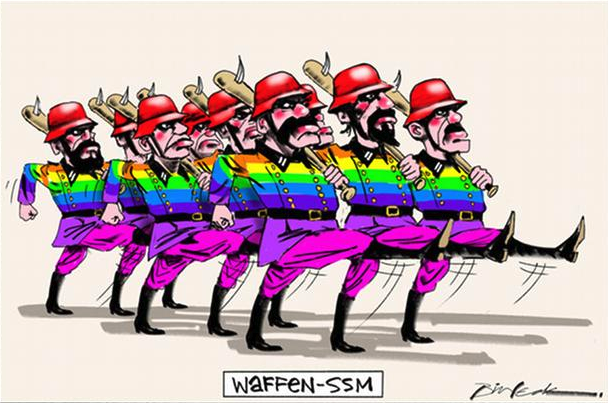 The Sydney Morning Herald reported that the FLC’s “crime” was to publish links on their website highlighting the dangers to children of transgender “medications” such as puberty blockers and cross sex hormones. The FLC also linked to articles warning of the danger to women and girls in private spaces thrown open to men identifying as women.

The campaign against the FLC is being led by Equality Australia, which is a continuation of the 2017 political campaign set up to fight for same-sex marriage.

One of the plebiscite’s Yes campaign leaders, Anna Brown, now works full time for Equality Australia harassing community groups and schools who do not fall into line with its radical gender fluid worldview.

The FLC’s Principal Solicitor Anna Kerr said: “Aside from the obvious attack on freedom of speech, we believe this conflict is representative of broader efforts to undermine women’s sex-based rights.”

“The Council’s punishing of those it disagrees with should not be tolerated nor simply allowed to slip under the radar,” said CEO Rachael Wong.

“We’re just grateful that women of all types from all political persuasions are concerned about this issue,” Kerr told Sky News.

WFA has set up a petition in support of the FLC.

With the rainbow political movement’s totalitarian impulses now more visible, serious pushback is beginning as people from different sides of the political fence unite to preserve freedom of speech.