Cook's arrival should be celebrated

Cook’s arrival 250 years ago is to be celebrated

Genocide best describes Hitler and has nothing to do with Australian history, according to Geoffrey Blainey.

Geoffrey Blainey is Australia’s master historian who only gets better with age, as his interview with Andrew Bolt on Sky this week showed.

In the lead-up to this month’s 250th anniversary of Lieutenant James Cook’s sighting of and landing on the east coast of Australia, I read Blainey’s excellent Sea of Dangers – Captain Cook and his Rivals.

I wanted to take a deeper dive into Cook’s achievement and counterbalance the usual black armband negativity coming from the left about marking the occasion.

Of course, the European settlement that Cook’s voyage of discovery opened up upended the way of life of the indigenous peoples. No one denies that.

It was always going to happen and trying to make Australians live in perpetual guilt about their past can’t change the bad and the ugly of it.

As Blainey said to Bolt, describing us as perpetrators of a “genocide” on the Aboriginal people is “silly”.

Genocide is a term that should be reserved for Hitler. (Click the image to watch). 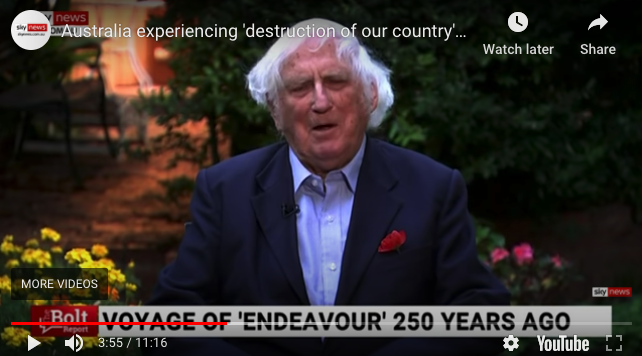 Yes, there were massacres and conflict during the colonial period. There was also harmony and justice – as was evidenced by the hanging of white men for killing Aborigines at Myall Creek.

I believe white and black Australians should apologise to each other for brutal killings that occurred on both sides during our colonial period and that forgiveness should be sought and received, in the hope this will bring healing.

Sadly, the overwhelming number of indigenous deaths from white settlement occurred not from conflict but as a result of imported pandemics of diseases like smallpox to which they had no immunity.

This was as a result of our ignorance and it was tragic.

But those calling for Australia Day and Cook’s landing to be seen as an invasion need to take their own deeper dive into history.

The idea that the indigenous people of Australia were living together in some sort of utopia that was only disrupted by the arrival of marauding white people is untrue.

Hundreds of small tribes, many of whom were in a perpetual state of warfare populated this land.

In one of his other books, Australia and its Peoples – the rise and fall of ancient Australia, Blainey writes: “Violent death – by spearing or clubbing – was a restraint on the growth of the Aboriginal population just before the arrival of Europeans, and for some time after.”

The cessation of black-on-black bloodshed on a population-limiting scale surely has to be one of the positives of white settlement.

But back to Cook.

Today is the 250th anniversary of his first landing on Australian soil at what is now known as Botany Bay.

He was two years into a round-the-world voyage of science and discovery which firstly took him to Tahiti via South America to observe the transit of Venus.

His Royal Navy ship the Endeavour was a converted Yorkshire collier – a robust, state-of-the-art vessel of the day.

It was not much longer than a tennis court and was home to 94 men, a nanny goat and a veritable Noah’s ark of chickens, pigs and dogs until they were all eaten, except for the milking goat.

Cook, the very humble son of a Yorkshire farmer got his maritime start on colliers like Endeavour plying the coast of England before joining the Royal Navy and fighting the French in Canada.

When he was chosen to lead the Tahiti mission, he knew exactly the sort of ship he wanted – a keelless, three mast-ed and virtually flat-bowed tub.

His brilliance at mathematics and chart making meant he came into contention for the Venus project which was to be followed by a secret mission to see if a continent existed or not in the South Pacific.

He carried sealed orders from King George III which he only opened after the planetary observation was completed.

The King included a command to treat the natives with “civility and regard”, hardly the dictate of a civilisation hell-bent on genocide.

Sailing south west Cook bumped into what he soon realised to be the east coast of the north island of New Zealand.

The Dutch explorer Abel Tasman, after discovering Tasmania but not the Australian mainland 127 years earlier, had found the west coast of the north island but not the south island.

Cook was to discover that New Zealand was two islands but not the continent he was looking for.

So he turned south west again before sighting the east coast of Victoria at point Hicks, named after the young man who first laid eyes on it from atop a mast of Endeavour.

Turning north, Cook was keen to land and replenish supplies but the weather and no suitable spots meant he had to wait until they reached what is now known as Botany Bay.

On the journey up the coast they spotted Aborigines walking along the beaches but seemingly uninterested in what to them must have been a strange vessel off the coast.

After eight days at Botany Bay where the young and brilliant botanist Joseph Banks and prominent scientist Dr Daniel Solander collected myriad of new plant species, Cook was keen to make for England while continuing to meticulously chart the east coast of Australia. 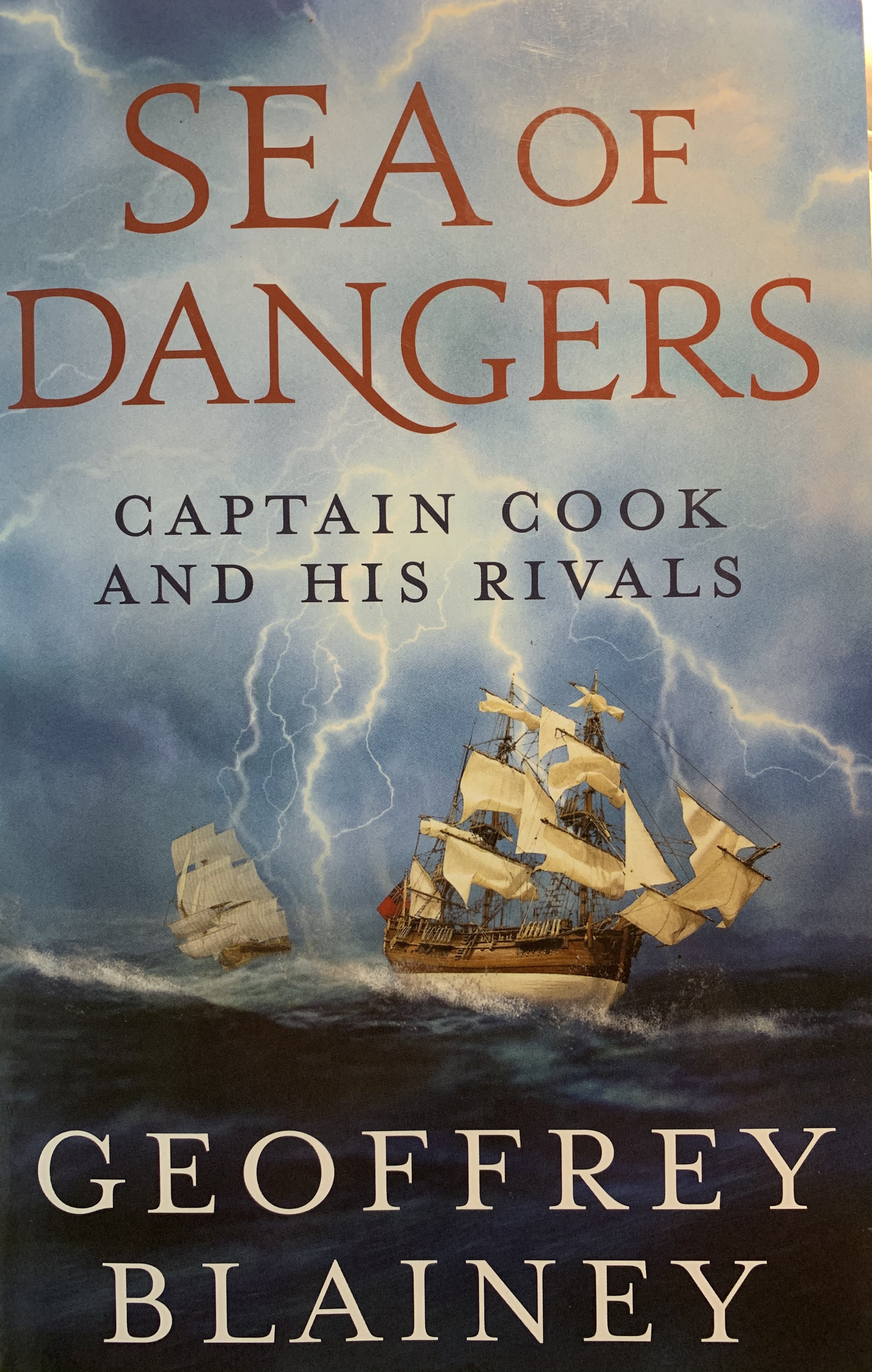 The normally risk-averse Cook chanced his arm sailing on a beautiful moon-lit night off the coast of tropical far north Queensland when he crashed on to the reef.

Stuck fast and with a large hole requiring pumps to be manned furiously, they managed to tow the ship off the reef with row boats on the high tide.

They limped into what is now the Endeavour River at what is also now Cooktown where they beached the ship and repaired it.

If Cook had not chosen his keelless converted collier, he probably would not have lived to tell the story and someone other than the English probably would have colonised Australia.

During this sojourn the crew saw their first kangaroo and crocodile and had conflict with the local Aborigines who were trying to steal supplies.

Repairs done and ship re-loaded, they pressed on for Java in what was then the Dutch East Indies, now Indonesia.

Cook successfully navigated the shallow and treacherous Torres Straight, proving for the first time that Australia and New Guinea were separated.

Arriving in civilisation for the first time in more than two years, their stay in Jakarta was bittersweet.

A shipyard meant proper repairs could be made to Endeavour but the humidity and bad air of Jakarta affected and infected his crew.

Endeavour became a death ship on the long voyage to Cape Town with a staggering quarter of his loyal crew succumbing.

John Thompson, the one-handed but effective ship’s cook, John Ravehill, the close to 80 year-old sailmaker, Charles Green, the astronomer, and Sydney Parkinson, the artist who gave us the first images of Australia, were among those sewn into their hammocks and cast into the ocean.

It was only a matter of time before Europeans colonised Australia.

Unbeknown to Cook, the French captain Jean de Surville in the St Jean-Batiste was also prowling the ocean off the east coast of Australia at almost the same time, looking for the same thing.

Having departed the French colony of Pondicherry in India, de Surville had sailed south from the Solomon Islands.

Off the coast of Sydney, his crew smelled the land carried on the breeze before turning east towards New Zealand, de Surville deciding what they smelled was Western Australia – a place the Dutch and English had painted such a grim picture of that he didn’t even bother.

It turns out that during the stormy day of December 16, 1769, Cook and de Surville were probably only 20 miles apart off North Cape on the north island of New Zealand, according to their logbooks.

Notwithstanding the weather, it is possible that men on watch might have seen the other ship’s masts and sails.

Their proximity at such a time of history was unbelievably extraordinary.

De Surville continued sailing east only to discover there was nothing to discover in the vast stretch of ocean between New Zealand and South America - except a very fast and valuable future sailing route.

What is also largely forgotten in history is that in 1788, just a few days after the First Fleet landed at Botany Bay, another French captain Jean François de Galaup, comte La Perouse sailed in with two frigates – another bizarre coincidence of history.

The exploits of 18th century mariners like Cook and de Surville were truly epic. One is feted as one of the all-time greatest navigators.

The other, who missed Australia and ended up drowning while trying to land in Peru, is almost unknown.

Both voyages changed the world for Europeans and for Aborigines forever. That was inevitable.

What was achieved by Cook and his rivals was truly epic and should be celebrated.

I’m grateful that Geoffrey Blainey wrote about all this so well and can so easily de-bunk the left’s hatred of our history.