Unfinished business from the same-sex marriage plebiscite drags into a third year.

Restoring freedom of speech and religion in the wake the 2017 legalisation of same-sex marriage remains unfinished and contested business for Scott Morrison’s government going in to 2020.

Most Australians are deeply perplexed about why this is taking up so much of the government’s efforts. They were told that same-sex marriage was simply about “love” and that no-one else’s freedoms would be affected.

The bitterness with which the LGBTIQA+ political movement is fighting attempts to allow a diversity of views about marriage to co-exist in Australia is proof of the lie at the heart of their campaign.

Same-sex marriage was never about “love and tolerance”, it was about burying people who refused to bow to their vision of marriage, family and gender.

If dissenters to same-sex marriage and gender fluid ideology do not have free speech, no one in Australia’s freedom is safe.

A week after Scott Morrison released an updated Religious Discrimination Bill, which among other things allows for freedom of speech and religion for the five million Australians who believe marriage is between one man and one woman, a star-studded cast of gay celebrities released a YouTube video condemning the government’s push for tolerance.

Spear-headed by Ian Thorpe, the 40 second clip urges all politicians to oppose the bill. 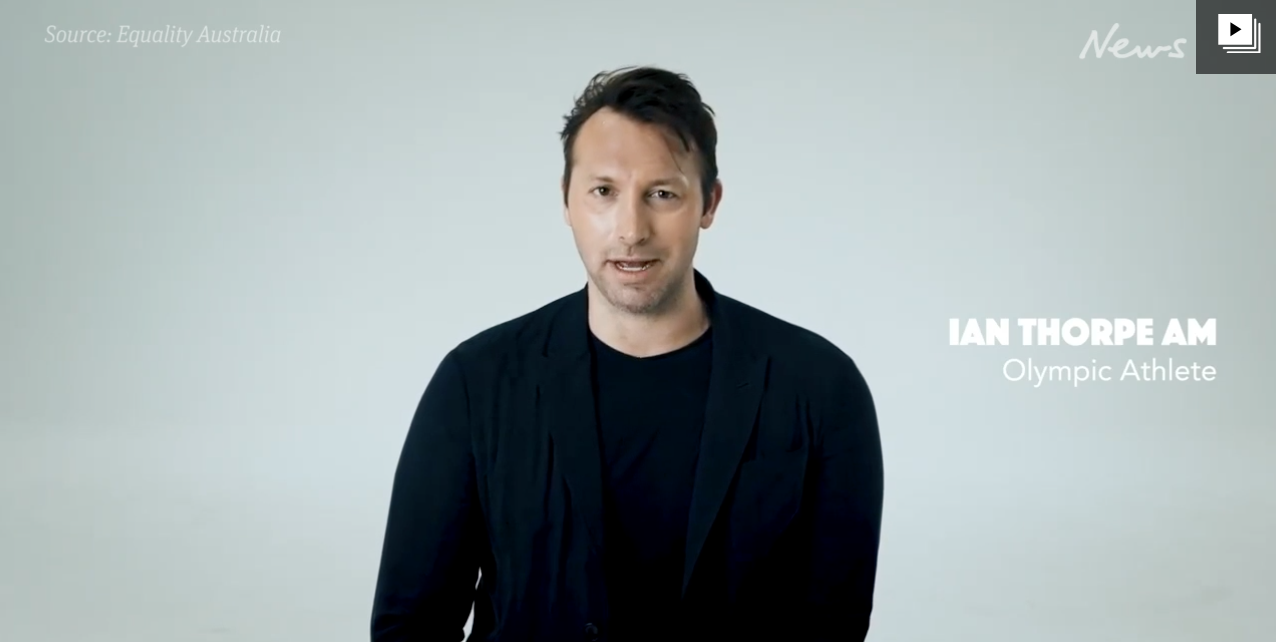 “The religious discrimination bill would give people a licence to discriminate,” Thorpe says.

The irony of this is that the only people who have been discriminated against for their beliefs in recent years have been Christians like rugby star Israel Folau, tennis great Margaret Court, Catholic Archbishop Julian Porteous, former Army major Bernard Gaynor, and a whole host of lesser known Australians.

Allowing a Christian school to be free to employ staff who share the ethos of the parent community is not discrimination anymore than the Greens refusing to give me a job as a party advocate is, despite my impressive political skills.

On this score, Thorpe is right. The bill is a license to discriminate because not all discrimination is bad or evil.

But of course, when it comes to identity politics, common sense is out the window.

They won the marriage campaign and now they want to drive into the dirt anyone who refuses to genuflect to the rainbow flag.

This means beliefs about marriage and sexual ethics which do not celebrate rainbow sexual and gender expressionism must be punished.

At the moment the law is on their side, weaponised by the passing of same-sex marriage.

State, Territory and Commonwealth anti-discrimination laws contain a raft of words that criminalise people who might offend, insult, or ridicule people on the basis of their sexual orientation or gender identity.

While most fair-minded Australians would agree that it is simply good manners not to offend, humiliate or insult someone, LGBTIQA+ activists believe the public utterance of views that support traditional marriage or morality is offensive and therefore criminal behaviour.

The Morrison government is simply trying to keep the public square open to those who want to uphold the time-honoured view of marriage and family, teach this as the preferred model to children at churches and religious schools and advocate for this in public.

The revised bill plugs an important gap missed by the long-running Ruddock Commission into religious freedom and the first bill that was released.

It sets a higher bar for “vilify”, defining it as inciting “hatred” or “violence”.

Under the first bill this could be defined subjectively in court allowing vexatious legal action to be brought because someone was simply offended.

Bernard Gaynor has lost his house defending vexatious legal action against him by gay activist and serial litigant Gary Burns.

While “hatred” can be a subjective legal term and is often falsely imputed by gay activists toward people who believe in traditional marriage and biological gender, the revised draft’s definition greatly improves freedom of speech in the bill.

The bill also takes away the farcical situation in the first draft where judges would be left to determine theological matters about what does or does not constitute a religious belief.

That is put back to the experts of the particular religion and further protects religious views from claims that people are not acting in good faith.

The big question of 2020 is will Labor back the freedom of religion bill?

The years leading up to the same-sex marriage plebiscite saw the Labor party go off a rainbow coloured cliff to adopt all of this movement’s crazy political demands in policy.

For Labor to support the Religious Discrimination Bill it will have to walk back some of this.

The question is whether or not Labor wants to appeal to mainstream voters who are less than impressed with toxic rainbow politics.

Labor lost a lot of bark in western Sydney where people in Labor seats voted overwhelmingly against same-sex marriage.

If Labor refuses this sensible bill to allow these people the dignity of holding their views on marriage, family and gender without being legally harassed by gay activists for “bigotry”, it will just entrench itself further as a party that does not care for people’s freedom of speech and freedom of religion.

The test for Anthony Albanese will be whether or not he has the courage to stare down Thorpe’s demand that politicians “oppose the bill”.

The rainbow political movement is not used to the left of politics saying no to it. They react, often violently, when their demands are not met.