Here’s the proof of your pariah status

Here’s the proof of your pariah status

The only question is how long this cultural moment lasts and how much damage it does while we are going through it.

In his 2017 book Strangers in a Strange Land, the former Catholic Archbishop of Philadelphia Charles Chaput writes that Christians have gone from being pillars of society to pariahs in just 20 years.

Australians wanting to test this proposition should look no further than hearings this week in Canberra into whether religious freedom will be allowed to continue.

The canary in the coalmine is the Christian school movement – or at least that part which wants to be faithful to the Christian view of marriage, sexual morality and gender.

In a culture which sees sex purely as a recreational transaction between any adults and defines individuals by their sexual identity, ideas which challenge these notions are not to be tolerated.

They are seen as bigoted and oppressive. 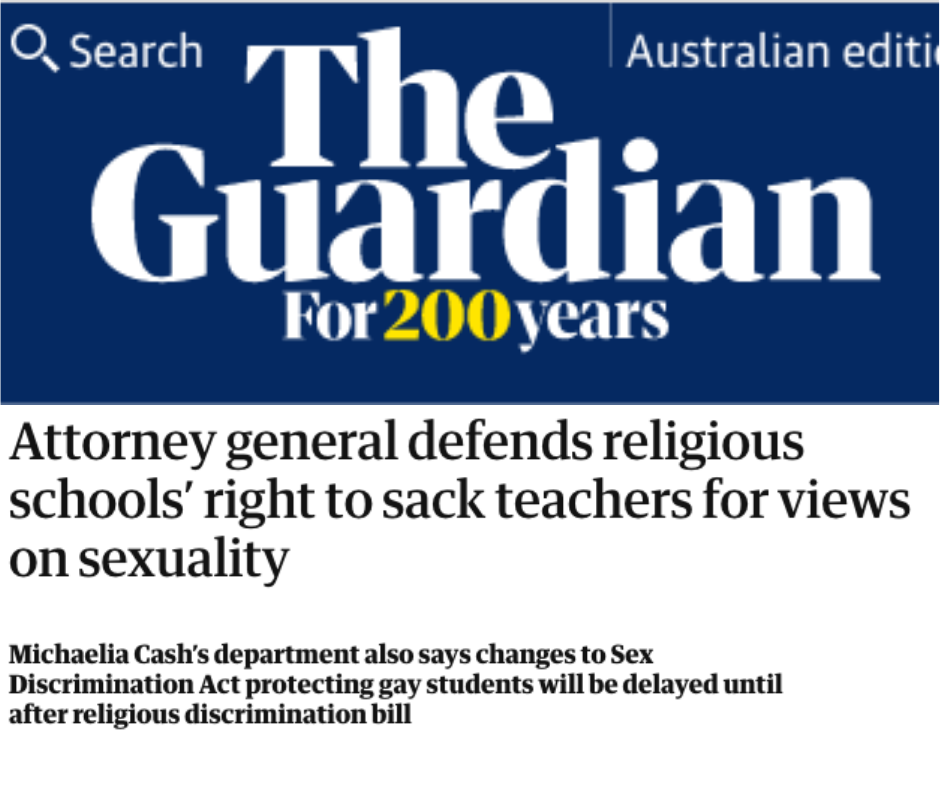 Teaching children that marriage is the lifelong union of one man and one woman and that this is the most fulfilling context for sexual expression is not just a religious curiosity, it is seen as downright dangerous.

Even the biological science of the gender binary is now viewed as religious quackery by our cultural and political elites.

No society has ever practiced perfect sexual morality (something to do with flawed humanity) but up until my grandparents’ generation, almost no one disputed what marriage was and almost no one was confused about their gender.

In a less self-obsessed age, marriage was encouraged because it was self-evident that it was in the common good, even if it was a hard standard to live by.

(There’s something about reward and fulfilment for doing hard things but that’s a discussion for another day).

Back to yesterday’s hearings before the Parliamentary Joint Committee on Human Rights and what we saw was witness after witness, submission after submission attacking Christian schools’ right to be Christian.

Dressed up in emotive straw man arguments about Christian schools wanting to sack gay teachers or expel gay students, it is clear who the pariahs are in our society.

Christian leaders appearing before the inquiry were asked to defend the sacking of a gay teacher at a Sydney Christian school last year.

Anglican Bishop Michael Stead said: “Correctly understood, the teacher’s sexuality is not the key issue in this case”.

He said the teacher was unable to sign the school’s statement of belief which affirmed the Christian view of marriage.

If a teacher doesn’t agree with a school’s mission, that’s not the school’s fault.

Yet the cultural expectation, particularly now that same-sex marriage is law, is that a Christian school and its parent community must bend their beliefs to suit an individual teacher.

There is no tolerance for the view that in a diverse and tolerant society we would allow religious parents to freely create associations and institutions with different views of what constitutes the good life.

But in the brave new world which is sneaking up on sleeping Christians and their leaders, parents will no longer have the right to educate their children in schools which uphold their beliefs and morals.

If the efforts to undermine the Morrison Government’s Religious Discrimination Bill are successful, it will spell the death knell for Christian schools in Australia.

It will also drive Christian teaching on marriage and gender underground, or consign its public expression to those willing to risk being sued.

The tragedy is that despite our Christian Prime Minister, few in the Morrison Government are mounting a public defence of Christian schools. The Attorney General Michaelia Cash is trying but she needs back up.

Such is the fear of crossing the all-powerful LGBTIQA+ political machinery lined up at the committee hearings, there is no cavalry.

In a participatory democracy and advocacy system like ours, silence always leads to defeat and that’s probably where religious freedom is headed.

I hope I'm wrong because as weak as this bill is, it provides a base from which to build.

Such is the political interest in the Religious Discrimination Bill, which was promised in the wake of the 2017 same-sex marriage debate, that there is a second parliamentary inquiry being held by the Senate.

The Upper House’s Legal and Constitutional Affairs Committee will be holding its public hearings in Canberra next week.

This extraordinary level of political scrutiny has not been set up as part of a process to protect freedom of religion, its aim is to bury it.

The same gaggle of mainly taxpayer-funded rainbow activists will be lining up to again sink the boot into any attempts to allow space in the public square for the Christian view of marriage, gender and sexual morality.

The good news is that this is simply a cultural moment because the radical left and libertarian right’s views of marriage and sexuality are unsustainable for civilisation.

History has proved this time and again.

The only question is how long this cultural moment lasts and how much damage it does while we are going through it. It could last another 50 years.

In the meantime, Christians need to begin preparations for living through it and doing the hard work of rebuilding for a flourishing future on the other side.