How many more brains are in neutral in this post truth world?

So many questions, so few answers.

“Do you enjoy The Saturday Paper?” was his first question.

“Are you a Christian?” was his second.

I was minding my own business in the Qantas lounge in Canberra last week but I didn’t mind the interruption. I’m always up for discussion. 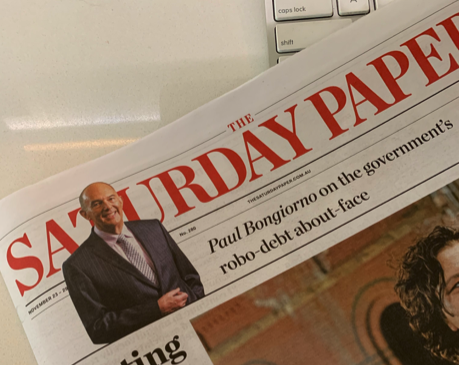 My questioner was the leader of an influential civil society institution in Canberra and he recognised me from my time at Australian Christian Lobby and the marriage campaign.

A self-declared Labor voter and fellow Christian he asked if he could join me for a few minutes before his flight.

I don’t often read the flawlessly politically correct Saturday Paper but it is in abundant supply in Qantas clubs, often alongside that other organ of the left, The Monthly. I see reading these as opposition research.

Seriously, I appreciate good writing and good intellectual argument regardless of whether or not I agree with the world view being espoused.

I often wonder what will it take to get The Spectator in to the Qantas lounge. Rowan Dean I hope you are reading this blog.

Sadly while-ever woke rainbow warrior Alan Joyce is CEO of Qantas chances are Buckley’s and none. But they do have the Aus, so that’s some consolation. I digress.

Back to my curious left-leaning Christian friend. He was keen to engage me on the fall-out from the great 2017 marriage plebiscite.

“I voted Yes”, he declared. But then he lamented that when asking some of his staff they were only game to acknowledge their No vote in whispers, after a glance from side-to-side.

That was the No campaign’s point, I tried to explain. Almost five million Australians now feel like lesser people because they upheld the timeless view of marriage. Bigots even.

They live in fear at work and know they are now pariahs with anti-discrimination law weaponised against them.

My new friend, despite clearly being my intellectual superior, had no answer and could only share my concern for dissenters.

Curious, I asked him why as a Christian he had voted against the Christian view of marriage.

He mumbled something about there not being a “monolithic” view of marriage in Christianity.

I guess we now live in a post truth world where even Christians can make up their own “Christian truth” to justify their actions.

I didn’t want to let him off the hook so I asked him how he could justify supporting a family structure which required children to miss out on the love of a biological parent to satisfy the lifestyle wishes of same-sex couples.

Again, he had no answer and was quick to change the subject. Surely a Christian who voted Yes should have thought this through.

It got me thinking. How many other really smart people voted with their tribe or just went with the Zeitgeist?