How the ABC is driving legal and social anarchy

Our cultural elites are making Australia dangerous for everyone, especially children.

The Cardinal Pell exoneration has shown again why the Left and the libertarian Right have to be taken on and their ideas beaten.

Let there be no confusion. Beat ideas, not people. Precious good ideas are in peril.

But first a word about child sexual abuse, because little children are sacred.

Sexually abusing them is of course one of the most heinous crimes imaginable.

In an era of anything goes, we are desperately trying to hold on to one last vestige of sexual morality. Good for us.

It is a blight forever on the church that child sexual abuse was found in its ranks and that it was covered up.

As a Christian I feel deeply ashamed.

What has happened is unforgiveable and to the church’s eternal shame. Victims and survivors must be compensated.

Ironically, George Pell was one of the first to realise this in the 1990s and took action before any government told him to. While nothing could salve the pain of survivors and their families and Pell’s “Melbourne Response” was not perfect, at least someone was doing something to compensate them and to clean up the church.

The Royal Commission which Julia Gillard set up into institutional child sexual abuse found it also to be rife in the wider society - in government institutions, secular youth groups, schools and family homes.

Having set itself up as a guardian of morals and trust, the church, though, deserved to be in the spotlight when it had failed so catastrophically.

While the church and other community groups have now cleaned up their act and instituted child protection safeguards, we are still miles away from eradicating child sexual abuse from the mainstream, let along from under rocks.

While the church may never regain the trust it has lost, the pain has been worth it to purge itself of this crime against children and against God.

But we are not sure about Hugh Heffner, whose “anything goes” playboy dream they sought to live out in real life. Somehow the lines became blurred and for Epstein at least, children were no longer forbidden fruit, just as young women were to be available on call for his and his mates’ pleasure.

It’s much easier to rail against the church and against a powerful church figure like Pell than to be an anti-porn campaigner. 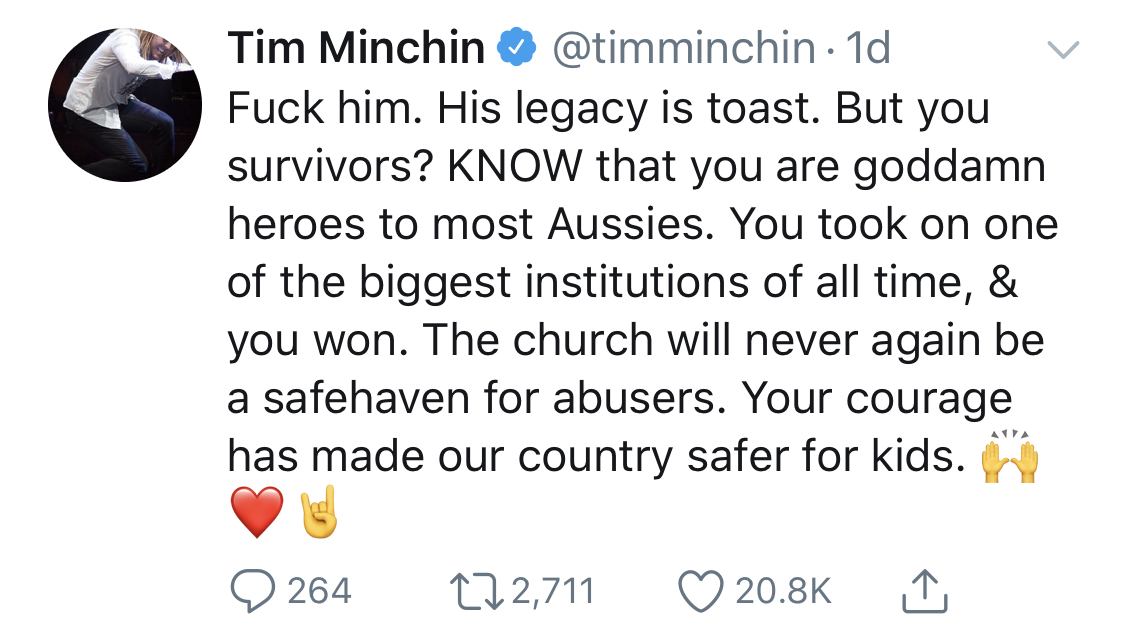 Afterall, Pell championed conservative social values. He was for sexual morality and flourishing family life because that provides the best protection for children.

Pell was hated because he spoke up when others did the left’s bidding by being silent. He spoke against redefining marriage because he knew that would create injustice for children. 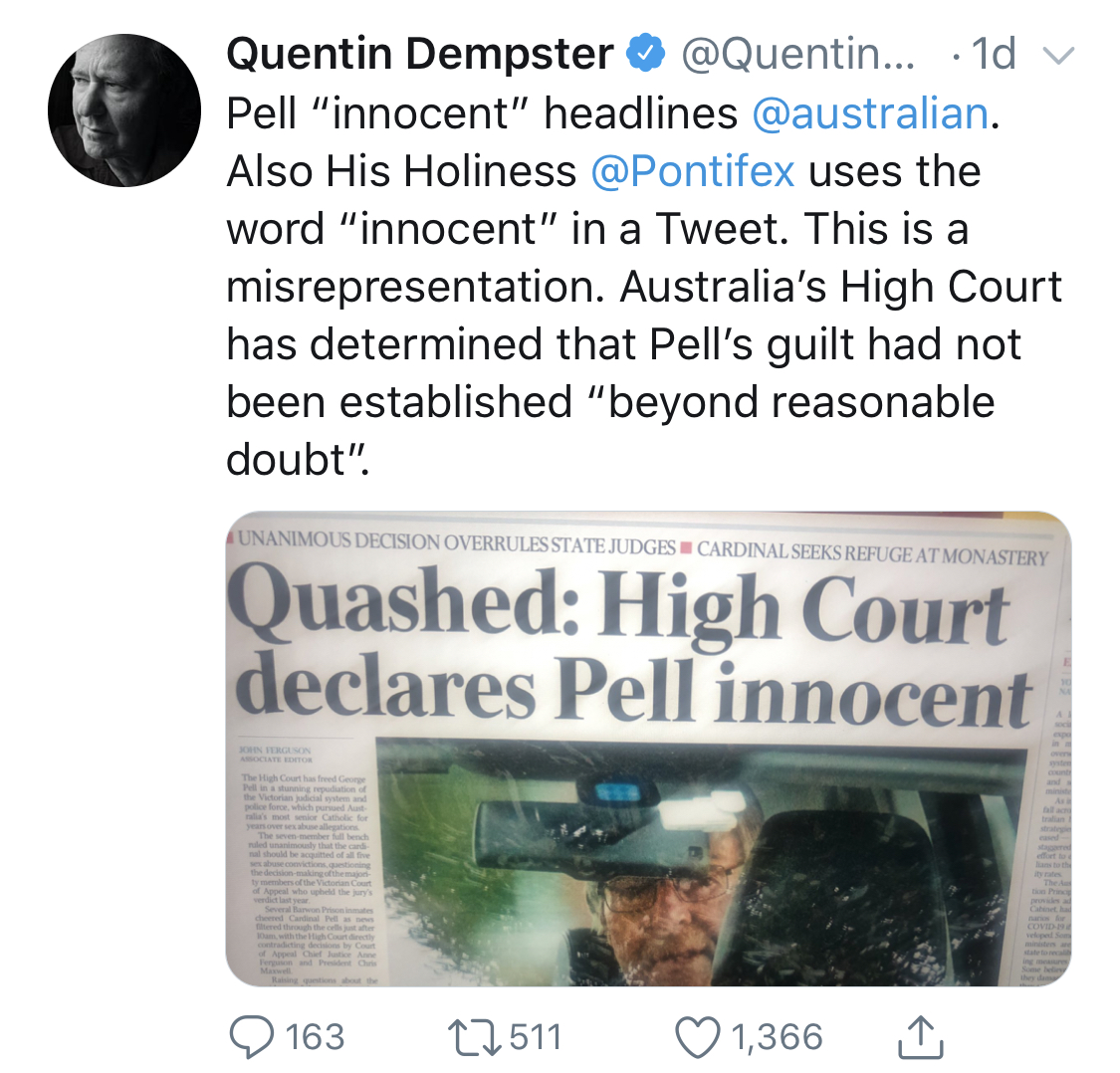 Thanks largely to the Left’s lynch mob, we now don’t know whether or not we believe in once cherished principles like “innocent until proven guilty”. 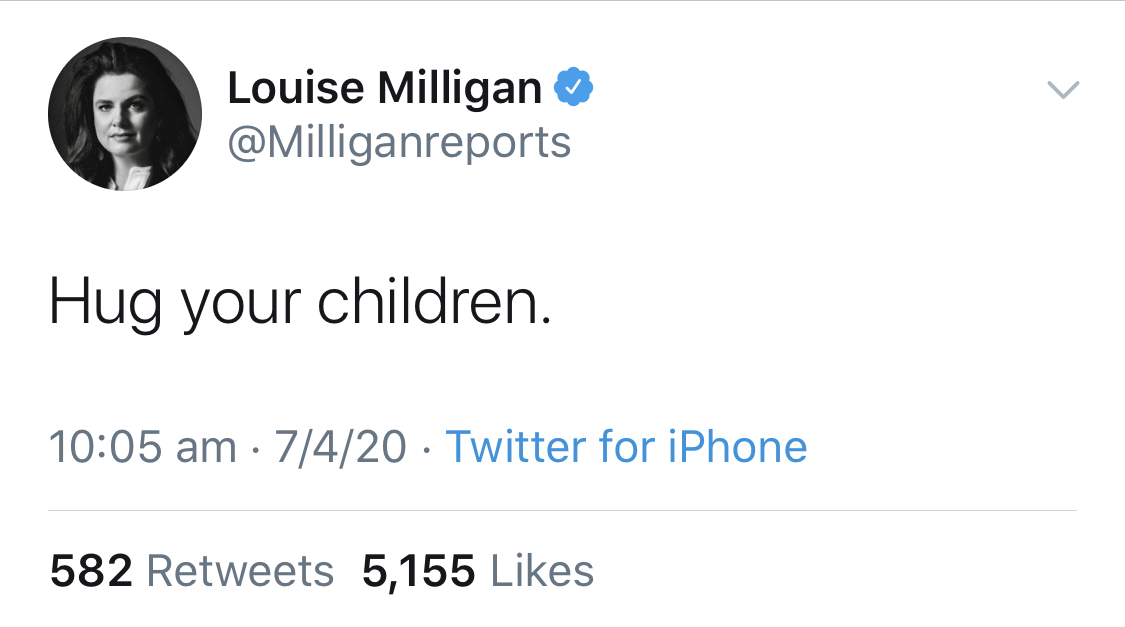 The intimidating line-up of ABC journalists and personalities refusing to accept Pell’s innocence, despite the High Court’s 7-0 judgement in his favour, needs further examination. 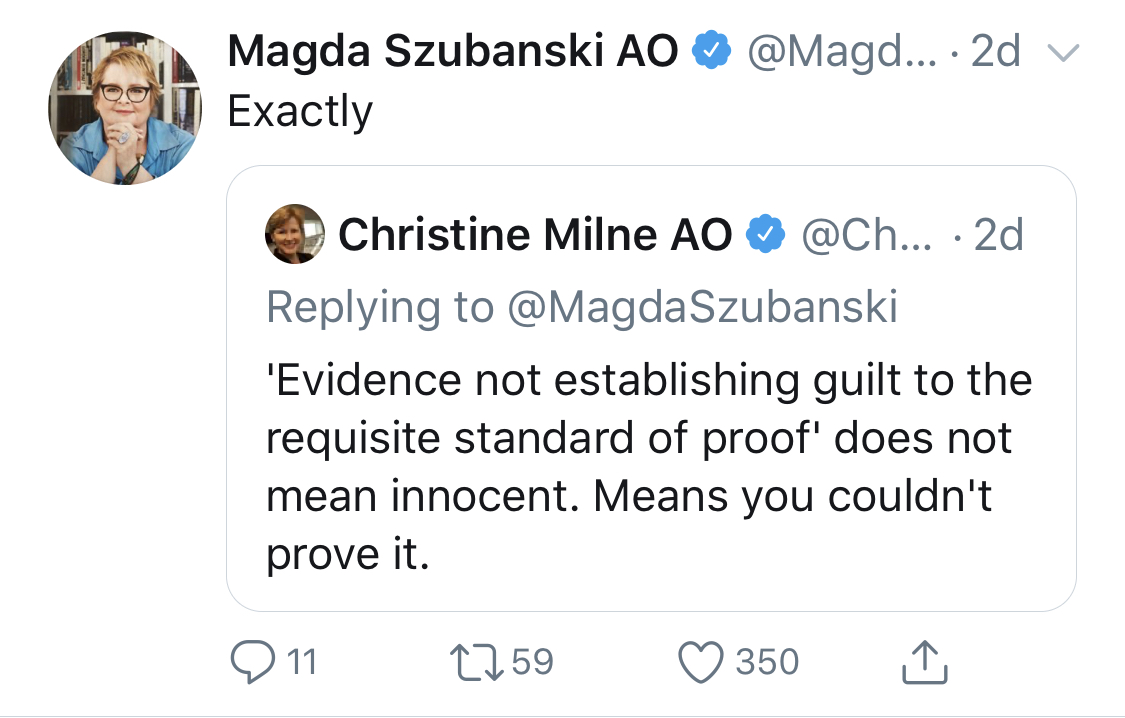 These are respected journalists, entertainers and people, some with Australian honours – now openly trashing the idea of the presumption of innocence – a bulwark of the protections the western legal tradition offers its citizens.

Up until five minutes ago, unless you could be proven guilty “beyond reasonable doubt”, you were innocent.

This is the way civilisation stops mob rule. It is not an excuse for society to go soft on paedophiles, we all want them caught and punished. Wherever they are. 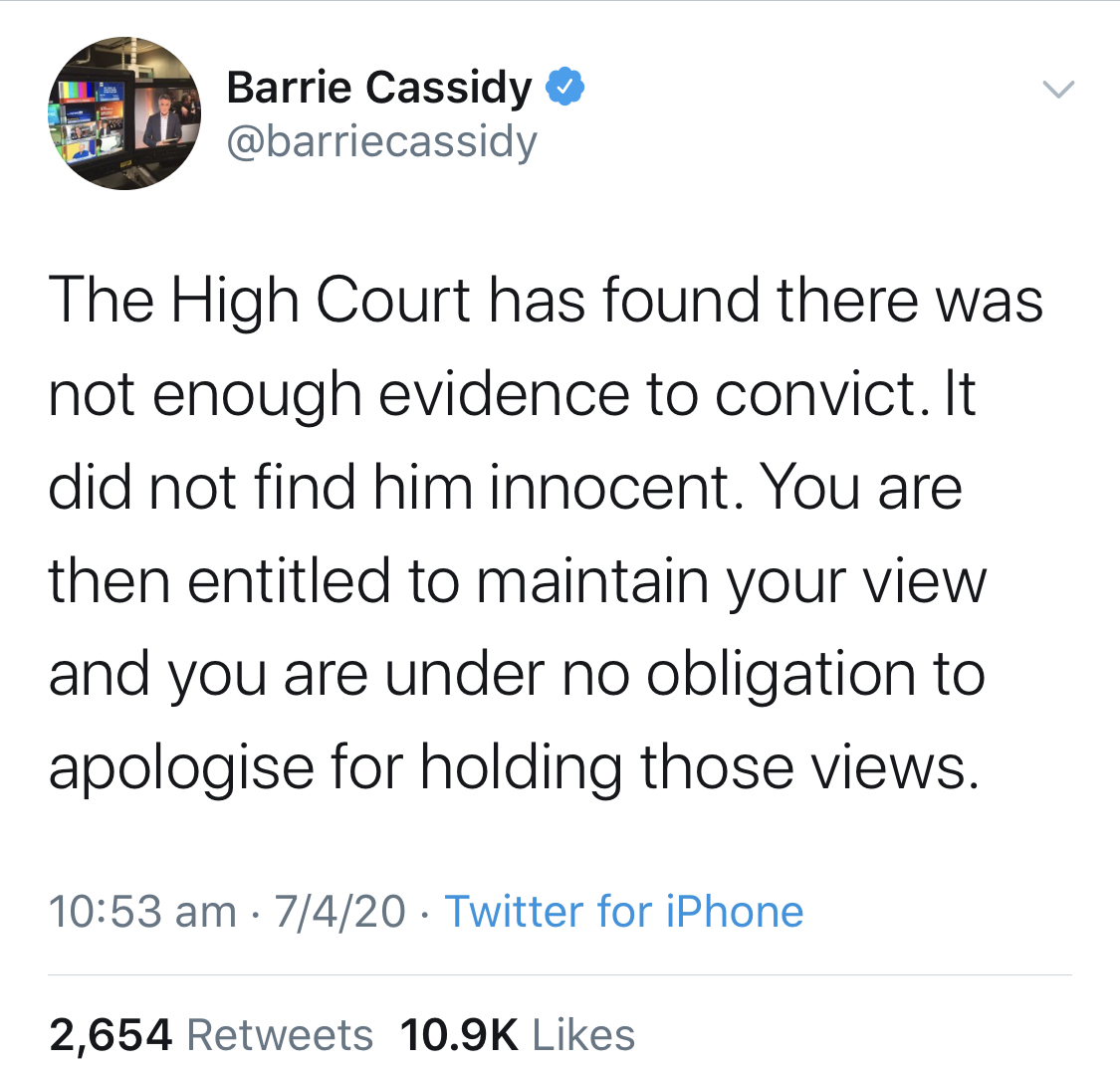 But anyone who has read the High Court judgement, as I have, can see that what has been alleged of Pell is impossible.

No doubt something unbelievably terrible has happened to “J”. No one is calling him a liar. But sending Pell to jail for the sins of the Catholic church is not true justice for “J” and certainly not for Pell, who already spent 404 days in jail.

Yet he could still smile for the cameras chasing him up the Hume Highway when he stopped at Glenrowan to buy a mobile phone charger.

Barrie Cassidy, Quentin Dempster, Louise Milligan, Magdna Szubanski, and Tim Minchn are just some prominent ABC staff and personalities who have been active on Twitter this week railing against the court’s declaration of innocence.

They claim he was let off on a technicality. Under our system, if there’s reasonable doubt, one is innocent. We don’t lock people up because we don’t like them.

If a critical mass of the leading lights of a nation no longer believe in the precious idea of “innocent until proven guilty”, what is to safeguard anyone who finds themselves in front of a baying mob?

Especially one with the cultural power of this group.

What does ABC chair Ita Buttrose believe about the rule of law and the presumption of innocence?

How dangerous is it for a civil society to gift $1.1 billion per year to an organisation populated by leading thinkers who want to trash that which distinguishes us from barbarianism?

As someone who has been named by former Fairfax editor Mike Carlton as one of the nastiest people in Australia, I have a theory about why it was so important for the Left to “get Pell”. 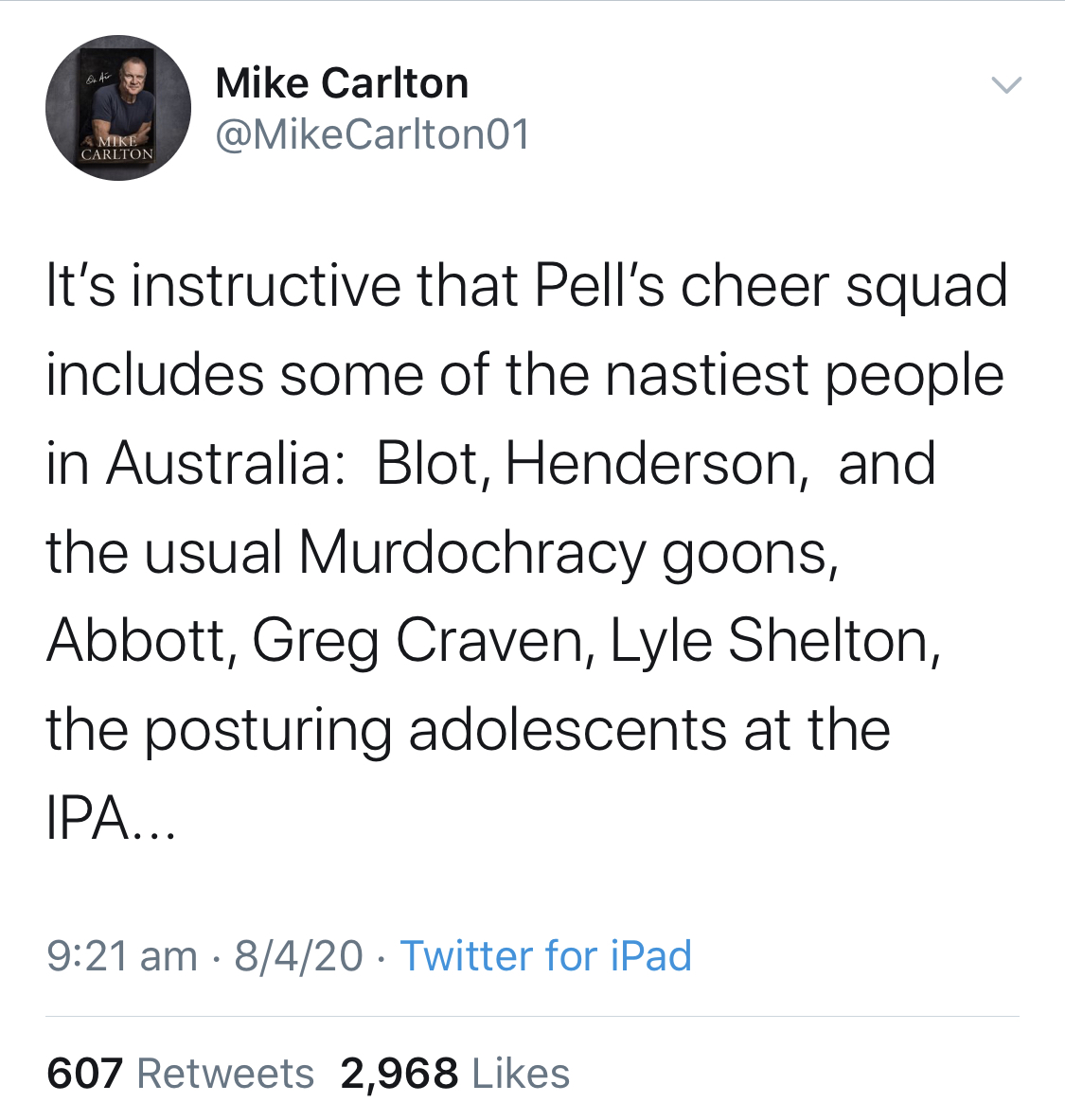 He spoke with courage, logic and clarity truths the Left found unpalatable. To nail him as a hypocrite would be their biggest prize.

Most opponents of the 1960s sexual revolution and cultural Marxism had already gone to ground and no longer posed a threat.

Not Pell. He would speak about faith and morals and had friends in politics like John Howard and Tony Abbott.

His columns in the Sunday Telegraph were full of wisdom but not the kind the Left liked.

That our cultural elites at the ABC, in their eternal Pell derangement syndrome, continue shaking their fists at the doors of the High Court means Australia is not a safe place for anyone who crosses them. Read their angry tweets.

If the Left think you are “nasty”, they will demonise you until they shut you up.