Junking the idea of morality has dulled the senses of even captains of industry.

The fall of Westpac CEO Brian Hartzer for down-playing the seriousness of banking for paedophiles points to a wider societal problem.

“This is not an Enron or Lehman Brothers, we will get through this,” he had told his senior execs.

The next morning he was sacked.

Hartzer wasn’t the only one who knew Westpac was raking in profits from money laundering and did nothing about it. Westpac broke the law 23 million times.

That’s how many illegal money laundering transactions it facilitated, including 12 for international paedophiles.

The Commonwealth Bank had been caught doing the same thing with 50,000 money laundering transactions and last year was fined $700 million.

You’d think someone at Westpac would have taken a look at their own books just to make sure.

Not even the damning revelations of the banking royal commission was enough to wake up Westpac.

The money is too good for those in the offices with a view.

My contention is that fat pay packets combined with years of junking the idea of morality has dulled the senses of even captains of industry to what is right and to what is wrong.

To even say there is a right and there is a wrong today is radical. Postmodernism teaches every school child that truth does not exist objectively and the culture reinforces this.

Since the 1960s sexual revolution, morality has become a dirty word. It’s seen as judgemental. To judge the actions of another has become today’s most grievous sin.

But if one is not clear about morality in matters of things sexual, how can one be clear about ethical behaviour in other areas of life?

One would think the business of banking was completely unrelated to sexual morality. In Westpac’s case, it clearly was not.

Poor character in this area of life has been seen in recent decades as of no consequence to one’s professional life.

This is often used to excuse the appalling behaviour of politicians who are unfaithful to their wives.

Now I’m not suggesting Hartzer and the execs at Westpac were all living some sort of a swinging ‘60s dream.

But all of us have been swimming in a cultural soup for five decades that has trashed old fashioned virtues of integrity, truth and personal responsibility.

Here we had one of our largest trading banks turning a blind eye to those using their services to profit from the proceeds of crime, including the crime of sexually abusing children.

Did no one at Westpac notice the crimes of many churches and institutions over the past few decades? Do these guys watch the news?

Signalling one’s virtue by supporting all manner of politically correct causes has been the way to demonstrate one’s social piety these days and that’s where Westpac’s focus had been.

So Westpac jumped on board with the campaign to redefine marriage, giving its brand over to the sexual liberationists at the rainbow lobby.

Climate change of course is one of Westpac’s other big causes. It was part of the Australian banking industry’s boycott of loaning money to the Adani coal mine.

Johannes Leake’s cartoon in The Australian this week summed it up. 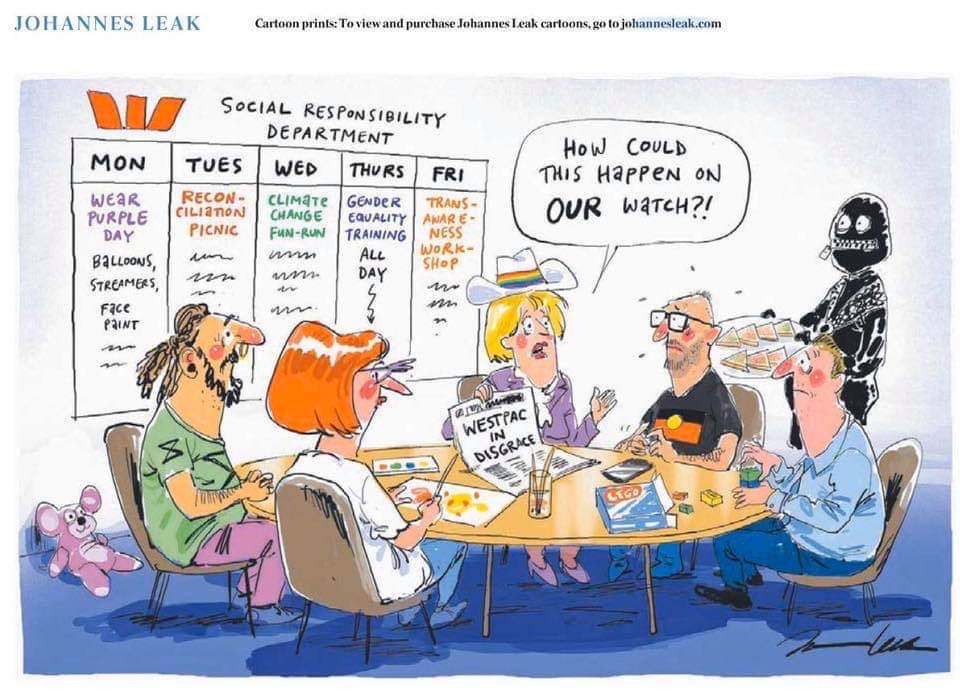 Westpac executives were too busy virtue signalling the crimes of conservatives who wanted to preserve marriage and ensure jobs in regional communities to focus on the real crimes taking place under their own noses.

But when western democracy was founded by the American revolutionaries, they were not shy about it.

And when he spoke about religion he was speaking about Christianity, because that was the only religion of the American colonists.

“Only a virtuous people are capable of freedom,” Benjamin Franklin said.

Virtue is different to values. Values can mean almost anything.

Virtue is to have the internal character to know what is right and to do it even when no-one else is looking. The bar isn’t even that high because that’s almost unattainable. A virtuous person knows when they have made a mistake and takes steps to rectify it. This is the basis for self-government.

Without self-government people can’t be free unless there are packs of anti-corruption watchdogs barking at the heels of business, politics and the public sector.

But even watchdogs have their limits.

If high powered and highly paid leaders like Hartzer can be in denial about what’s right and what’s wrong even after their deeds are exposed, how are the rest of us to know?

Until we rediscover the moral compass that comes from the Christian religion, we will only keep papering over the cracks until the wall of our social cohesion collapses completely.