It wasn’t just Trump they were impeaching, it was you

It wasn’t just Trump they were impeaching, it was you

Today’s impeachment of President Donald Trump is about one thing and one thing only.

It’s a naked attempt to toxify and dismiss the legitimate public policy objectives of conservative people. The Establishment Left wants to banish from politics the common-sense instincts of ordinary people.

Make no mistake, you too were impeached today.

If you are pro-life, pro-the natural family, pro-biological gender, pro-small government, pro-the nation state, pro-secure and affordable energy, pro-lower taxes, pro-free speech and pro-freedom of religion, you too stand condemned for being part of a movement led by someone who apparently incites “domestic terrorists”. 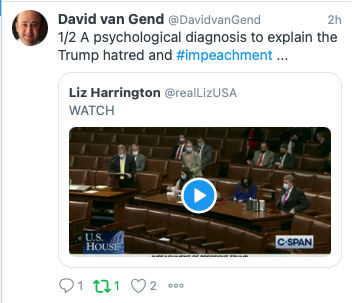 Trump’s use of words “fight like hell” were certainly ill-considered but not out of the ordinary in a typical political speech.

They would certainly not be out of place at a Labor party-affiliated trade union rally, despite the history of violence associated with some unions.

Anthony Albanese said he loves “fighting Tories”. Labor’s Senate Leader Penny Wong once said there was “no place in modern Australia” for my views about children having the right, wherever possible, to the love of their biological mother and father.

And who will ever forget Gough Whitlam’s line on the steps of our seat of democracy to a baying mob: “Well may we say God save the Queen, because nothing will save the Governor General”.

Imagine if Trump had said: “Well may we say the election was fair, because nothing will save Joe Biden”. He would be condemned for issuing a death threat.

Unlike Whitlam, Trump tempered his political rhetoric with "I know that everyone here will soon be marching over to the Capitol building to peacefully and patriotically make your voices heard."

It’s worth reading the whole speech – it is an unremarkable political speech and its tone is subdued for a Trump rally.

It’s also worth considering the timing of events on January 6. The barricades were breached and the Capitol stormed by a mob of fringe Trump supporters and most likely nefarious actors while Trump was still speaking.

It’s a 45-minute walk from the White House ellipse to the Capitol. I’ve done it in 30 but I have long legs.

Trump was impeached today because of a speech upon which no one who actually heard it, acted.

Trump’s tone at the rally was subdued because he knew Vice-President Mike Pence was of the view that this was the end of the line in terms of opportunity to create forums for further examination of alleged election irregularities and illegalities.

Pence himself agreed the election was tarnished and said as much in his letter to Congress.

“After an election with significant allegations of voting irregularities and numerous instances of officials setting aside state election law, I share the concerns of millions of Americans about the integrity of the election,” he wrote.

However, he judged there was no further process open to the Trump campaign and that the certification of Joe Biden as President must go on.

Trump’s constitutional lawyer Don Eastman disagreed. He was of the view that Pence had the power to pause the certification for 10 days and allow the State legislatures, where serious allegations of fraud exist, to re-examine their results.

Pence wasn’t being asked to unilaterally overturn the result of the election, simply to ask the contested states re-check their results by examining the allegations.

I believe Pence to be a man of integrity and for whatever reason, he felt he did not have the legal authority to do this.

I’m sure he would have weighed up both sides of the legal argument.

It was wrong of Trump to attack Pence. After four years of unstinting loyalty, it would be a shame if their relationship ruptured.

Pence did more than anyone to legitimise the Trump policy agenda and ameliorate the problematic aspects of his style, character and tone.

And it seems like the two are still talking with reports of a positive meeting between the two in the Oval Office two days ago.

The Swamp, or in Australia’s case the Canberra Bubble, fights like hell (in a Kumbaya sort of a way, of course) to maintain the status quo.

There is Elite consensus, agreed even by some in the Liberal Party, that unborn children have no human rights, that the Davos globalist agenda is one we should be subservient to, that our economies must be urgently restructured to fight climate change regardless of the cost, that our children must be taught their gender is fluid, that the natural family is not worth upholding and that freedom of speech and religion must bow to norms prescribed by our Elites.

In my 20 years as a political activist, I have challenged all of these agendas at different times and felt the wrath of the Swamp/Bubble. The people of the Swamp and Bubble fight hard, they don’t fight fair and they fight with pernicious anger.

I document this in my book.

The Trump Movement was an existential threat to the Swamp and the Bubble. That’s why the Establishment Left on both sides of politics, and the Pacific, hate it.

Look at the pressure acting Prime Minister Michael McCormack has come under to genuflect. Good on him for standing strong.

The challenge for the conservative movement in Australia is to find leadership which will not bow and that will not allow the Establishment to pull off the toxification of its common-sense policy agenda.

Trump didn’t always get the tone right – what politician does?

We must not let the Establishment bury us. We must keep fighting for what is right. (Just to be clear, Lefties, I mean that metaphorically).

It wasn’t just Trump being impeached. It was you.