The treatments that are being given to children, particularly teenage girls, have no clinical evidence. – Dr Helen Waite

An activist lesbian, a radical feminist and a Christian lobbyist walked into a forum at Queensland Parliament House.

But what happened on Wednesday night was no laughing matter.

While there are obvious points of difference between the three groups, there is growing unity of purpose in wanting to see children love the body they were born in, rather than following the new fad of transgender gender-fluid ideology.

They were united in opposing a controversial Queensland Labor Government bill to jail doctors and health counsellors for being cautious about helping children change their gender.

“I can’t believe that this government would actually have a bill that criminalised practitioners who don’t want to sterilise children,” said Dr Helen Waite of the Coalition of Activist Lesbians (pictured below). 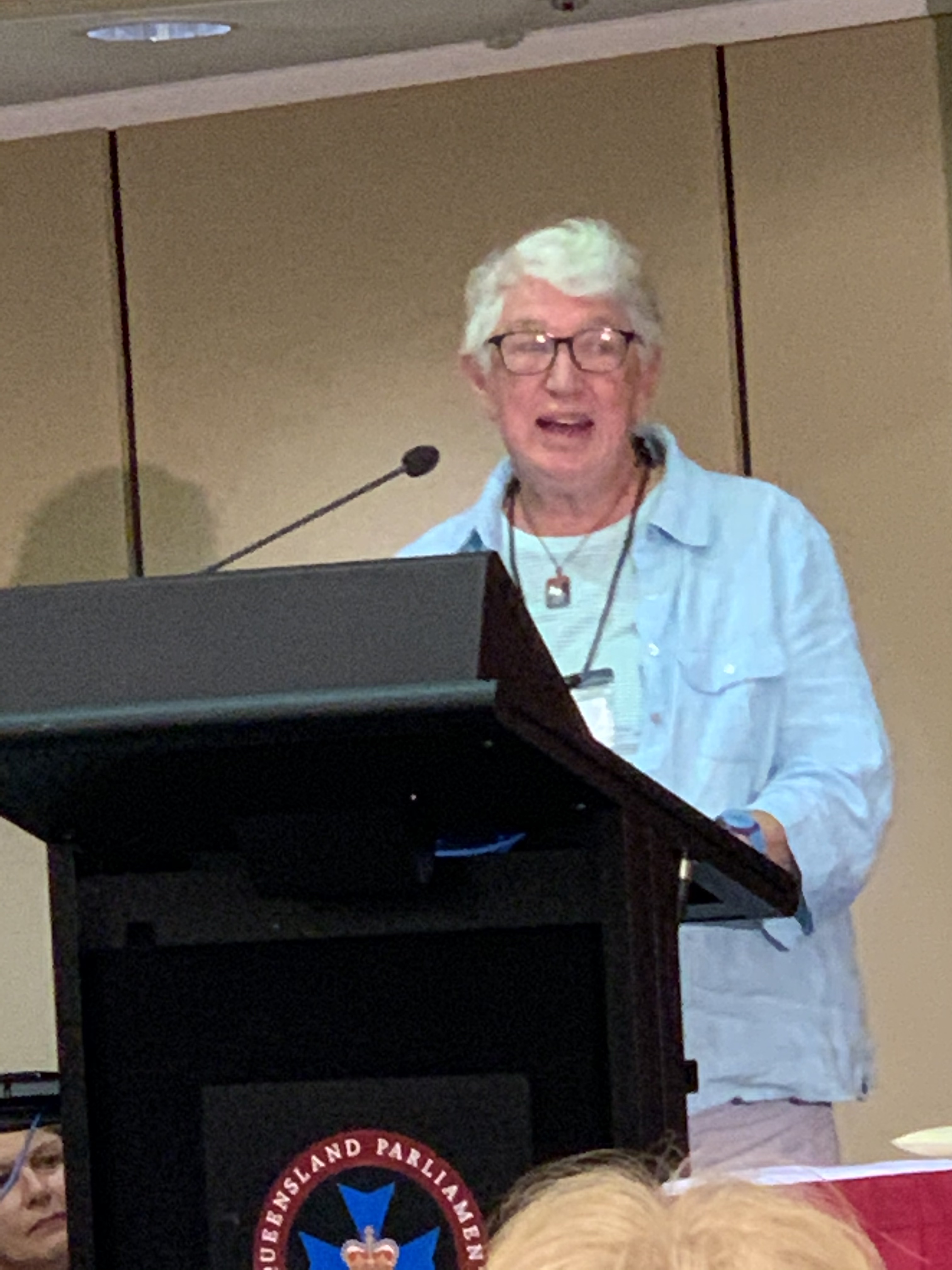 Puberty blockers, which stop the maturation of ova and sperm, are recommended by rainbow political activists and some doctors.

They are to be given to gender confused children as young as 12 and they lead to sterilisation.

“How can this be contemplated?” asked Maureen Young (pictured below), representing International Women’s Day Brisbane Meanjin.

“This legislation will not only encourage but mandate such treatment,” she said. 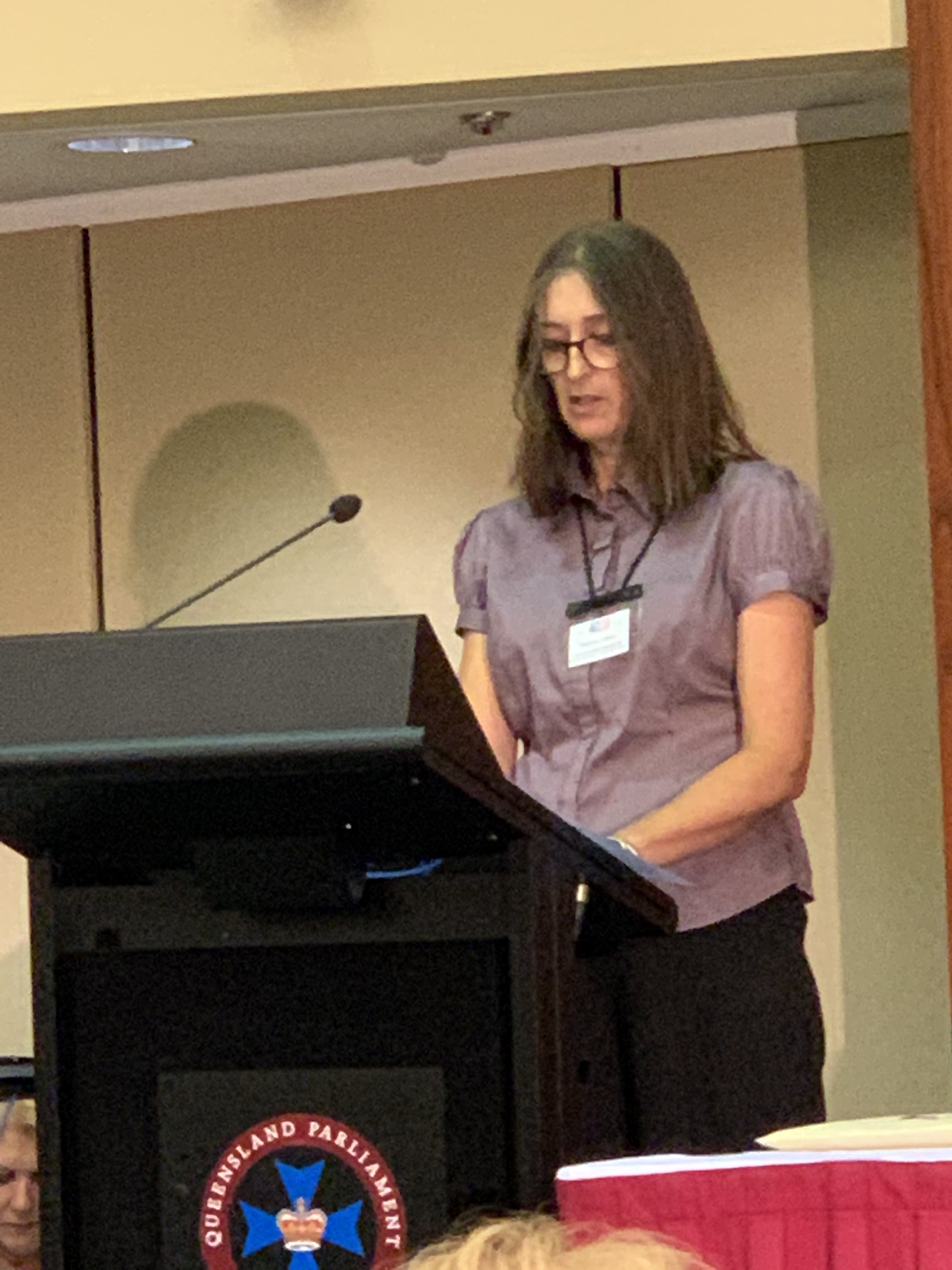 It included a leading paediatrician, a professor of psychology, a law academic and a former school principal.

Waite and Young both spoke at length about the dangers of transitioning children’s gender using experimental off label medications like puberty blockers and cross sex hormones.

The government of Annastacia Palaszczuk has its Health Legislation Amendment Bill 2019, or “gay conversion therapy” bill before the Parliament.

It may be well intentioned in wanting to stop practices that may or may not have occurred in Australia in the mid 20th century.

A parliamentary committee investigating the bill found no evidence that “gay conversion” therapy is widespread in Queensland.

No one supports coercively trying to change someone’s sexual identity – a practice that involved shock treatment, guilt and manipulation to try and make gay people straight.

No one objects to banning this, even if the bill is searching for a problem that probably does not exist.

However, the bill goes much further, baking into law the LGBTIQA+ political movement’s objective of indoctrinating children into transgender ideology and punishing health practitioners who have reservations.

The bill makes it a criminal offense for a medical practitioner or a health counsellor to assist even a competent adult who voluntarily comes to them with either unwanted heterosexual attraction or unwanted same-sex attraction.

It makes it illegal for a practitioner to suppress someone’s sexual or gender identity, with harsher penalties for anyone reported doing this to children.

And this is where lesbians and radical feminists make strange bed fellows with conservatives and Christians who share their concerns about child protection.

The bill permits only one form of treatment for children suffering from gender dysphoria and that is the “affirmation” model favoured by rainbow political activists.

On a roll from their 2017 success in de-gendering marriage, activists are on cusp of using the law to crush any dissent of their child indoctrination program.

They know that if they can jail dissenting doctors and health counsellors, everyone else in society will fall into line.

Dr Waite said she was concerned about “treatments that are based on ‘medical consensus’ and not clinical evidence”.

“We are in grave danger of repeating some of the mistakes of the past with this legislation particularly in relation to treating children with off label drugs and cross sex hormones that will render them infertile and chemically sterile for the rest of their lives.

“The treatments that are being given to children, particularly teenage girls, have no clinical evidence. This treatment and the onset of early gender dysphoria is very recent. We have no longitudinal data to tell us whether it is effective or whether it’s safe. At the very least we should be opening up treatment opportunities not closing them down to one preferred method of ‘affirmation’.”

Ms Young said transgenderism, reinforced by the bill, sent a message to girls interested in STEM (Science, Technology, Economics and Mathematics) learning that they needed to be like men to realise their potential.

“This is not what we feminists want for our bright, non-conforming girls. We want those girls and young women to take their rightful place at the forefront of industry and government knowing that they are valued and esteemed for the full range of their human character traits.”

Ms Young warned against “socially transitioning” gender confused children because the evidence showed that if given proper support the overwhelming majority desisted over time.

It’s worth quoting her talk at length:

“Cross sex hormones, in this case of our STEM-loving girl will be used to masculinise her facial features and allow her to build extra muscle, to make her vagina atrophy and her periods cease. It may also lead to male pattern baldness, high blood pressure and elevated levels of type two diabetes and cardiovascular disease.

“She may like to undergo top surgery which is the euphemism for a double mastectomy.

“She may even elect to have “bottom” surgery – a euphemism for the invasive cosmetic procedure designed to create the facsimile of a penis.

“Also called ‘gender confirmation surgery’ is when a surgeon turns a flap of donor skin into a phallus.

“A hysterectomy may be performed during which doctors remove the uterus, an oophorectomy to remove the ovaries might occur and there may be removal or partial removal of the vagina.

“All of these very invasive expensive procedures are carried out on healthy tissue on organs with no physical need (for them) to be altered.

“They are expensive and can involve considerable risk.

“These are the surgical procedures being encouraged by the gender ideologists on young women barely old enough to vote.

“This bill will make it illegal to offer anything but this path of pain and regret for vulnerable young people who deserve our greatest care and attention.

“We urge MPs to reject this bill in its current form.”

This is not a religious issue, it is not a culture war issue. It is a child protection issue.