Lessons from the flame-out of the Religious Discrimination Bill

Lessons from the flame-out of the Religious Discrimination Bill

“Given how unworkable this legislation made the operation of religious schools and the threat that it presented to the safety of the hundreds of thousands of students in the religious school sector whose needs weren’t carefully thought through by those who put forward the amendment, there was no choice for the government but to act the way it did.” – Senator Amanda Stoker

“We spend too much time on the back foot playing defence so we spend too much time responding to issues like the treatment and respect for children who have questions about their gender rather than talking about the positive things that Christian and religious schools do.” – Senator Matt Canavan

“A bigger issue across the board is the lack of strong male role models in many children’s lives.” – Senator Matt Canavan

It’s just over a week since a bill designed to protect freedom of religion spectacularly flamed out in the federal parliament.

What are the lessons? Why did something seemingly so straight forward crash and burn?

What is the future for freedom of speech and religion when it comes to sexual morals, the definition of marriage and support for the biological science of gender?

If Christian schools cannot uphold their sincerely held beliefs, does this spell the end for them?

To the last two questions, nobody knows. What was settled until same-sex marriage came along now remains unsettled in the Australian political discourse.

Cleverly they took control of the narrative and with laser-like focus turned their guns on Christian schools.

They made the Religious Discrimination Bill all about a fictitious problem of schools expelling kids because they were gay or trans.

This hijacking of the debate is the subject of an authoritative piece on the ABC’s website by Professor Patrick Parkinson.

He and a number of religious freedom experts invested a huge amount of time and energy engaging with the various government inquiries and processes only to find a misleading slogan pull the rug from under them.

They had no political cover, as activists from the other side stepped in and filled the breach.

Even Prime Minister Scott Morrison would not defend Citpointe Christian College, which simply wanted to ensure that activist male students didn’t wear dresses to the school formal or have access to girls’ private spaces.

Technically the power to expel LGBTIQA+ kids exists in the Sex Discrimination Act, a provision ironically put there by Labor in 2013, but not asked for by Christian schools and to anyone’s knowledge never used.

However, the provision does allow for schools to uphold their codes of conduct and protect the rights of children, girls in particular, from the unreasonable demands of transgender and sexual expressionist activists acting in defiance of a schools’ religious ethos.

When Labor, the Greens and the “modern Liberals” supported amendments to the SDA, they stripped these protections and potentially destroyed Christian and single sex schools.

The bill had to be pulled from the Senate, bringing four years of work to protect freedom of religion and children to a crashing halt.

The amendments went well beyond anything contemplated by the government. For instance, a girls school would be seriously constrained in making its decisions. We could find a biological male who presents as a woman being required to be admitted into a girls school. And that school would not be able to place constraints or different arrangements on that student to ensure no injury is caused to other girls in contact sport or to ensure they can be safely and respectfully accommodated, whether in boarding school or school camps, change rooms, bathrooms – the list goes on.

The school cannot resist admission on the basis of their gender identity. It cannot place discriminatory restrictions on the ability of such students to participate in school activities that are different to other girls. This issue was not worked through by those who put forward the amendment. It highlights how important it was for a considered legislative process to be conducted through the Australian Law Reform Commission, as the government proposed, to ensure the needs of these vulnerable children are respected while ensuring the safety and operations of religious school are not compromised.

Given how unworkable this legislation made the operation of religious schools and the threat that it presented to the safety of the hundreds of thousands of students in the religious school sector whose needs weren’t carefully thought through by those who put forward the amendment, there was no choice for the government but to act the way it did. The government could not, in good conscience, do anything to undermine the viability of religious schools.

As Dr David van Gend writes in the Spectator this week, the problem is that LGBTIQA+ political activists don’t believe in tolerance and multiculturalism. In their view, their cultural values must trump all others.

Such hostility to freedom of speech and religious conscience is a sign of uncivil times and supports the hypothesis I’ve proposed since the same-sex marriage debate: that the end game for sexual radicals is to banish from the public square, and ultimately from the private mind, any moral objection to a culture of sex-without-boundaries.

Speaking to me on the Macquarie Street political podcast, Senator Matt Canavan said there were lessons for Christians and conservatives from the events of last week. 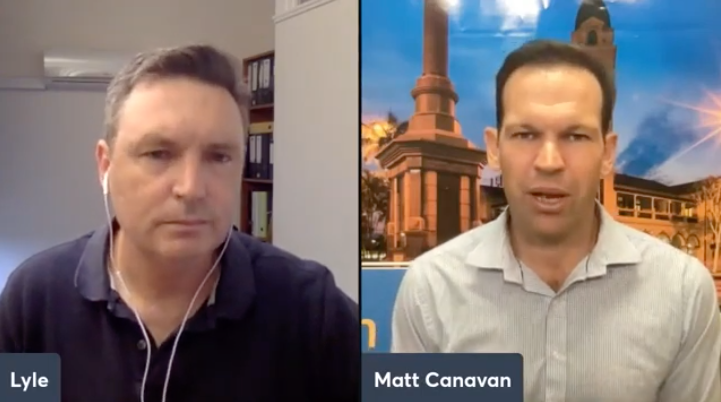 He even went so far to say that we have got to change the debate so the lack of male role models for boys and girls can be discussed.

We spend too much time on the back foot playing defence so we spend too much time responding to issues like the treatment and respect for children who have questions about their gender rather than talking about the positive things that Christian and religious schools do provide so we fell into a bit of a spiral and a trap in the last couple of weeks around responding to the particular issues around the Citipointe Christian school.

He went on to say:

A bigger issue across the board is the lack of strong male role models in many children’s lives. Kids need a dad – that basic right to a father. We don’t have enough male teachers in schools – only about 10 per cent of teachers are male across our school systems and it is often the Christian and religious schools that provide greater discipline and standards of behaviour that do of providing a set of structures that so many kids need, especially young boys. We need to spend more time talking about those positive aspects – what Christian schools, what schools with high standards bring to a child’s upbringing - and less time on the back foot defending issues that are highly charged and highly emotional and will just see our freedoms and rights chipped away if that’s all we talk about. 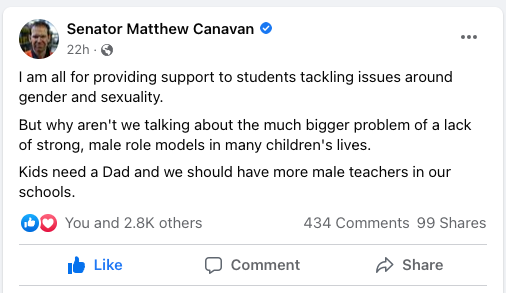 One of the issues raised which puts Christian and conservatives on the back foot is the playing of the suicide card.

Van Gend puts this to bed in his Spectator article.

This emotional blackmail has been with us since the marriage debate. (Gay activist Rodney) Croome, for example, opposed a plebiscite because having a debate would cause gay suicide: ‘If there is a plebiscite, and when the first gay kid dies at his own hand because of the hate and fear-mongering, I have to be able to look at myself in the mirror and know I did everything I could to stop it.’

There is a grave risk in making such reckless claims and expecting LGBTQ youth to be depressed and suicidal until every Christian school celebrates Pride week. Writing last month in Archives of Sexual Behaviour, sociologist Michael Biggs warned, ‘It is irresponsible to exaggerate the prevalence of suicide. Aside from anything else, this trope might exacerbate the vulnerability of transgender adolescents.’ He reviewed the UK Tavistock Clinic data and said, ‘The fact that deaths were so rare should provide some reassurance to transgender youth and their families’.

Yes, the suicide rate (3 or perhaps 4 kids out of 13,000) is raised, but Biggs fails to adjust for known suicide risk factors such as increased depression or the fifteen-times higher incidence of autistic spectrum conditions. Counting these few tragic cases as ‘trans-deaths’ could be like counting as ‘Covid-deaths’ those who died with the virus not from it. Enough, then, of the unfounded slander that traditional values lead to LGBT suicide.

The failure of the Religious Discrimination Bill should come as no surprise. It is simply the culmination of the failure of Christian and conservative leaders to speak into the public debate as the threats and lies mounted over many years.

It’s time to get on the front foot because this is a debate that won’t go away until every Christian school is forced to fly the rainbow flag.