It’s Labor’s policy which is controversial. Deves and Morrison are mainstream.

But LGBTIQA+ activists and their supporters in the media ridiculed the Prime Minister saying children under 18 are not allowed to undergo gender reassignment surgery.

The Guardian said Morrison “wrongly claimed” minors were being operated on. 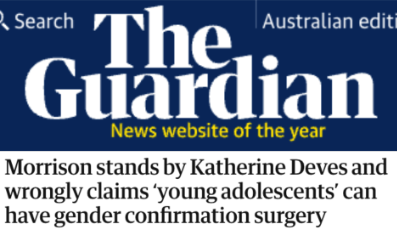 But it is not Morrison who was wrong. Australian girls under 18 have had double mastectomies as a result of LGBTIQA+ ideology.

Even the ABC had reported in 2018 that “Children with gender dysphoria no longer have to seek court approval to undergo surgery”.

Morrison was spot on.

Don’t the media have Google?

It’s bad enough that children are allowed to be prescribed experimental cross sex hormones and puberty blockers, which also can have irreversible side effects including infertility and brain damage.

Morrison’s comments come as his candidate for Warringah, Katherine Deves, was bailed up at pre-poll yesterday by Sky News host Chris Kenny who was frustrated that the Liberal party was shielding her from the media.

In an impromptu interview, Deves stood by her comments about children being “mutilated” by gender reassignment surgery which involved the removal of breasts and genitals.

“That is actually the correct medico legal term. Look, it’s very emotive and it’s very confronting, and it’s very ugly. So of course, people are going to be offended,’’ she told Kenny.

“But when you look at medical negligence cases, that is the terminology that they use. It is also contained in the Crimes Act of New South Wales.”

Deves said her previous apology was for the way her comments had been perceived but she did not resile from her position of defending children and girls’ and women’s sport.

Morrison was immediately set upon by the media today and to his credit he backed Deves.

“The issues she commented on yesterday are incredibly controversial. We're talking about gender reversal surgery for young adolescents and we can't pretend this is not a serious, significant issue. It is,” he said in a press conference.

He said parents were "worried" about the topic and that gender treatments were “often irreversible”.

“It's complicated and the issues that have to be considered, first and foremost in the welfare of the adolescent child and their parents, we can't pretend that this type of surgery is some minor procedure,” Morrison said.

When the media falsely asserted children are not allowed to have gender reassignment surgery, Morrison backed down but he need not have.

"Vulnerable people — every human being, deserves respect. What we need to look for from our national political leaders is ways to unify people, not play politics in order to divide people," he said.

On face value this is of course true. People suffering with gender dysphoria must be respected and loved.

But primary school children being taught at school and through social media that their gender is fluid are also vulnerable.

There is an unprecedented epidemic of children presenting at controversial gender clinics as a result of the promotion of radical LGBTIQA+ ideology.

Labor’s national platform says Labor in government will provide taxpayer funded sex-change operations to young people. It is not clear if that includes young people under the age of 18.

It’s Labor’s policy which is controversial. Deves and Morrison are mainstream.