Scott Morrison put his head above the parapet for girls, women and children this week but at the unfurling of a rainbow flag, took the knee.

The reaction was swift and brutal from the well-oiled LGBTIQA+ political machine and its media allies.

Yet mainstream Australia is desperate for leadership to stop radical LGBTIQA+ politics inflicting biological males on their daughters’ sport and putting them in their showers and toilets.

Former Deputy Prime Minister John Anderson told Sky News on Monday that polling on this “lit up like a Christmas tree”, demonstrating peoples’ concern at the extreme overreach of the rainbow political movement.

So why is Morrison so afraid? 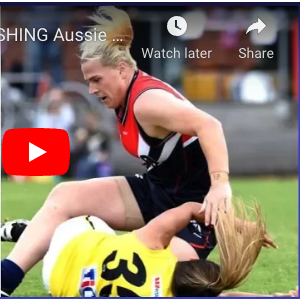 On the campaign trail on Monday Morrison hinted it might become a government bill, which would mean it would then have a chance of success.

“We will have more to say about that at another time …” Morrison said, sending the LGBTIQA+ political machine, “modern Liberals” and woke media into meltdown. 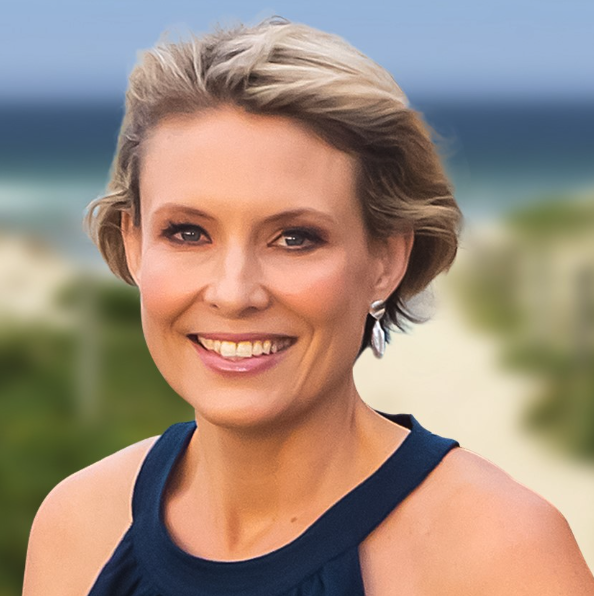 Speaking before the pile-on, he heaped praise on his candidate for Warringah, Katherine Deves (pictured above), founder of the pro-women and girls lobby group Save Women’s Sport Australasia.

Katherine Deves over there in Warringah, you know, she‘s standing up for something really important, and that is to ensure that, you know, when it comes to girls playing sport and women playing sport, that they’re playing against people of the same sex. And that’s, I know, it’s a sensitive issue. Katherine is, you know, an outstanding individual. And she’s standing up for things that she believes in, and I share her views on those topics. This is just about, you know, common sense and what’s right. And I think Katherine’s right on the money there.

All hell broke loose in the media and Morrison caved within 48 hours. The Liberal party cancelled Deves’ Twitter and Facebook accounts where she had stood up for children in the face of harmful LGBTIQA+ medical experiments on them.

The government does not have any plans for that (saving women’s sport) to be a government bill. It’s a private member’s bill, and I have told you very clearly what my views on that bill are, so I have been upfront.

He went on to say that Deves’ had “apologised and withdrawn” her comments about the surgical mutilation of children.

So what was so "offensive" about Deves' social media?

Here are some of the tweets about which rainbow activists set their hair on fire.

"They (mainstream Australians) will not stand for seeing vulnerable children surgically mutilated and sterilised,” Deves tweeted, reportedly along with a picture of a teenage girl’s chest after her breasts had been sliced off. 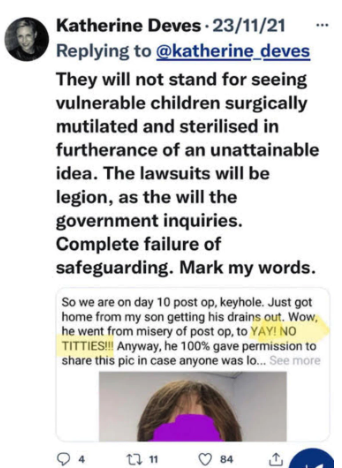 Another now deleted tweet about the rainbow political flag said:

“I get triggered by it. Whenever I see it on social media I think ‘What now? What are they demanding now?’ And I grew up with gay relatives and siblings and hung out in Surry Hills and X in Sydney in the 1990s. Lots of LGB family and friends, their movement has been destroyed.”

Deves' opponent in Warringah, the green left billionaire-backed "independent", Zali Steggall, called on Morrison to disendorse her, Tweeting that her comments on social media were "appalling and divisive".

Spectator Australia columnist James MacPherson cut through the rainbow mist to point out the obvious.

Saying a sex change involves the mutilation of one's body is neither "appalling" nor "divisive". "Appalling" is to pretend that lopping off one's penis in order to appear like a female is normal. "Divisive" is to insist biological men should be able to compete in women's sport. 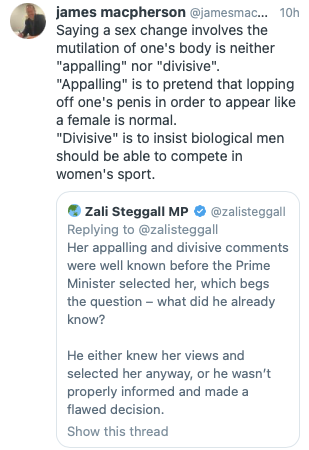 The censoring and cancelling by the Liberal party of a long-time campaigner for child protection and saving women’s sports is chilling.

Children’s bodies are being mutilated and sterilised as they undergo experimental transgender treatment at our new secretive gender clinics.

And we are not allowed to talk about it.

There is a growing detransitioner movement of people who regret having been taken down this path, often starting their journey as children being led by the hand by LGBTIQA+ activists.

Gender fluid teaching in Australian schools through various “pride” and “wear it purple” days reinforce in children’s minds the fad of gender fluidity they are seeing on social media.

Deves should never have agreed to Liberal party head office demands to delete her social media.

She was telling the truth.

She is now like Scott Morrison and almost everyone else who joins a major party – hopelessly compromised.