Speech suppression is the price to play

Self-censorship is the new normal for Christians who want to earn a living.

It would appear Israel Folau has agreed to the suppression of his speech so he can get back on the footy field.

News broke yesterday that he has signed a one-year deal with the French club Catalans Dragons to play in the English Super League competition.

This is good news. He’ll be back on the paddock within weeks.

But it has come at a price. 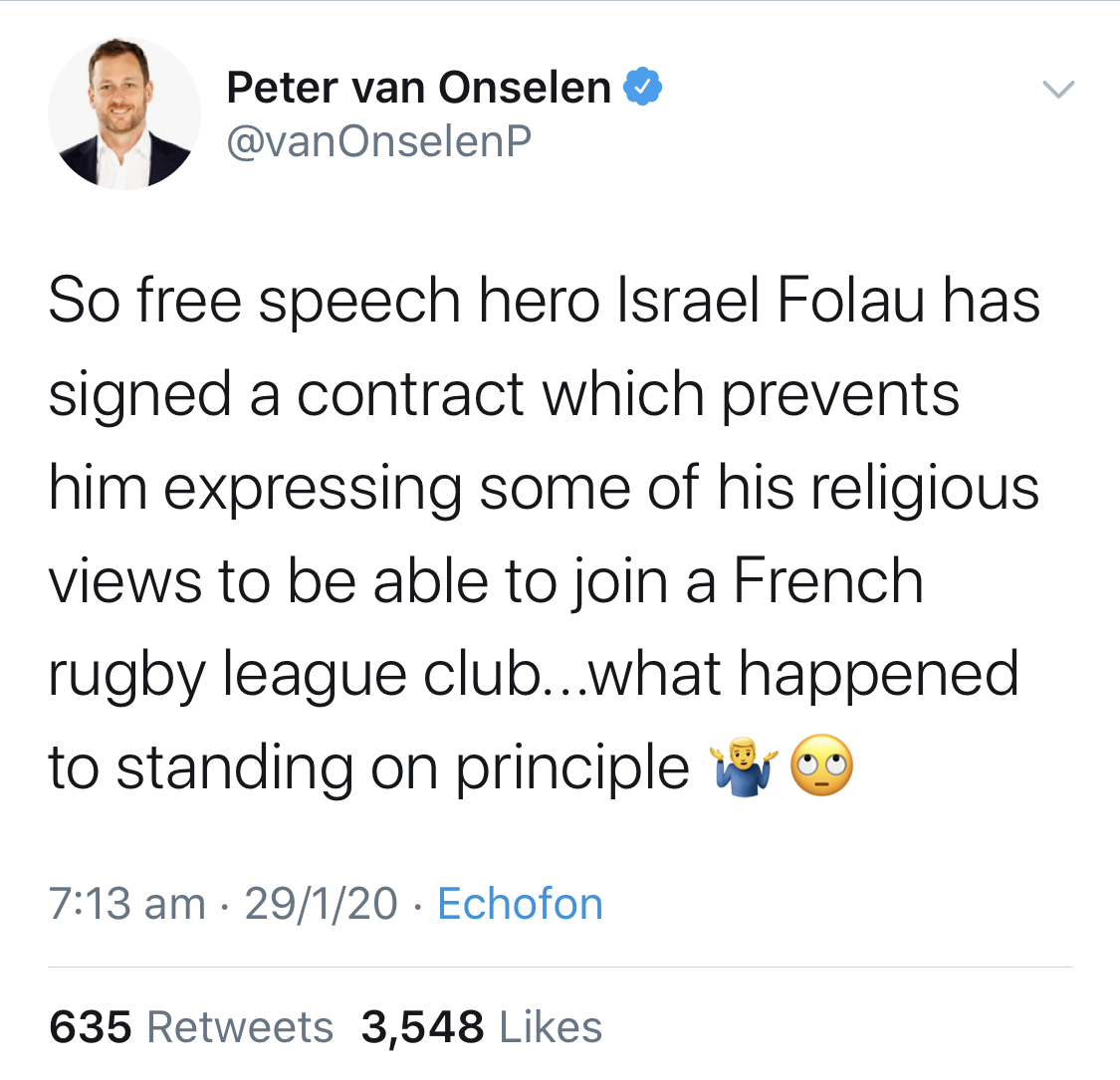 Before I get to the detail, a quick re-cap for the sake of context.

Folau hasn’t played football since he was sacked by Rugby Australia for posting on Instagram that “hell awaits” sinners such as homosexuals, drunks, fornicators, thieves and adulterers unless they turn to Jesus Christ.

It was perhaps an indelicate post but nonetheless an accurate paraphrase of millennia-old - and, until five minutes ago, uncontroversial - Christian teaching.

Having watched Martyn Isles interview Folau at the ACL conference last year, I have no doubt that Folau, like all serious Christians who are concerned about the eternal state of their neighbours, was motivated by love.

That long-form interview gave an insight into a man who has a beautiful spirit.

After his Instagram post, no drunks, thieves, fornicators or adulterers complained but the homosexuals sure did. Folau, once Australian rugby’s best player, is now shunned as a bigot in the eyes of our cultural and media elites.

While he eventually achieved a multi-million settlement from Rugby Australia for wrongful dismissal, his life ban on playing remains. Remember, he was involved in none of the all-too-common ugly off-field incidents that plague footballers – he just quoted the Bible.

When news of his Super League signing broke all hell also broke loose.

“I have sought the opinion of informed voices connected to our game, and the majority share my disappointment that one of our clubs has chosen to sign him.

“There is a strong feeling that the decision to sign him lets down many people connected to our sport.

“I made Catalans Dragons aware of those views.”

Folau, who has been a professional footballer since he debuted for the Melbourne Storm as a 17-year-old still needs to earn a living but he’s clearly not welcome in the English Super League.

Now aged 30 and at the peak of his rugby powers, he still has four to six years in the game from which to set him and his family up for life post-football.

This may help us understand why he has consented to the gag as the price of resuming his livelihood and passion.

“I'm a proud Christian, my beliefs are personal, my intention is not to hurt anyone and I will not be making further public comment about them. I look forward to my return to the great game of Rugby League with the Catalans Dragons.”

“We want to give Israel a new opportunity to shine on the pitch. We do not support or agree with Israel’s previously expressed and controversial views which are based upon his sincerely held religious belief. We do not share or condone those views and we are totally committed to our club and our sport being open and welcoming to everyone. We do not believe that those views should be publicly expressed, especially by a high-profile sports person. We have a signed agreement with the RFL. Any transgression will trigger an immediate termination of Israel’s contract and a substantial fine for the club.”

The last sentence of Guasch’s statement is the gag order. The consequences for any breach by Folau are serious for him and the club.

“So free speech hero Israel Folau has signed a contract which prevents him expressing some of his religious views to be able to join a French rugby league club...what happened to standing on principle 🤷‍♂️🙄”

The sad reality since the passing of same-sex marriage into law, the seminal LGBTIQA+ cultural moment of our generation, anyone who dissents to the LGBTIQA+ worldview but still wants to earn a living must suppress their speech.

They also have to accept shunning by peers and pariah status. Not a bad achievement for a political movement supposedly built on love, acceptance, tolerance and diversity.

Self-censorship is already happening in workplaces all around the country.  Christians and others, surrounded by colleagues wearing rainbow lanyards around their necks in government departments and large corporates, know that if they want to keep their jobs they had better keep their mouths shut.

The Australian idea of getting on with and respecting people with whom we disagree is out the window.

That speech suppression has become so normal is remarkable given that activists told us there would be “no consequences” to anyone else’s freedoms after the Marriage Act changed.

LGBTIQA+ activists and their friends in the media and corporate Australia have made an example of Israel Folau for the rest of us. If you don't suppress your speech, your ability to earn a living will be in jeopardy.

The reality is everything has changed and Australia, along with the rest of the West, is lurching towards totalitarianism.