There is no climate emergency

The anarchists on our streets are deluded. It's time we stopped believing them.

False hope and economic damage are all that is being peddled by the new Extinction Rebellion movement.

No government, no matter how much it believes in warming alarmism, is going to give in to their foolish demands.

They are demanding the impossible.

The technology does not exist to switch advanced economies to renewable energy - not if we want people to live in a state other than poverty.

If Extinction Rebellion’s catastrophic predictions are true, we will just have to brace ourselves because no government of any industrialised country is going to meet their demand for net zero emissions by 2025.

It is simply not possible unless governments deliberately cause a mass extinction by shutting down electricity and agricultural production (remember, after coal they want to shut down cows).

Extinction Rebellion’s real agenda, global socialism, is there for all to see. This tweet from earlier in the year was doing the rounds on social media this week. 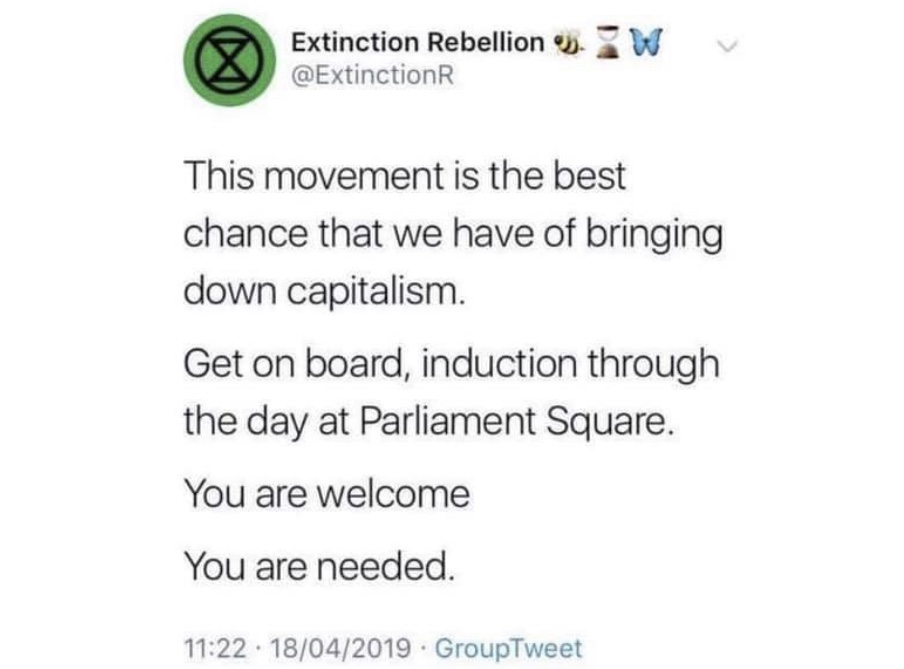 They are an anti-democratic revolutionary mob seeking to overthrow the established order through lawlessness.

De-industrialisation is what they consider to be “real action on climate change”.

The Morrison Government will meet its United Nations Paris agreement commitment of reducing greenhouse gas emissions by 26-28 percent of 2005 levels by 2030.

Working towards this has already caused enormous financial hardship for working families and pensioners.

It has cost Australian taxpayers tens of billions in subsidies to wind and solar which have only served to make our electricity more expensive and less reliable.

The Australian today reported that Australian Competition and Consumer Commission Rod Sims laid the blame for expensive and unreliable electricity largely at the feet of climate action policies.

“He (Simms) blamed a range of factors including rooftop solar schemes that forced all consumers to subsidise private investments, high network charges and the loss of the Hazelwood and Northern coal fired power stations for pushing up prices.”

It is cruel to demand Australians do any more and doing more is unnecessary.

Respected Danish environmentalist Bjorn Lomborg of the Copenhagen Consensus think tank says adapting to any possible global warming over the next 100 years is the way to go. He writes:

The UN’s Intergovernmental Panel on Climate Change estimates that by the 2070s, the total effects of climate change, including on ecosystems, will be equivalent to a reduction in average income of 0.2 to 2 per cent. By then, each person on the planet will be 300 to 500 per-cent richer.

If this is true, the same UN is being disingenuous and reckless in its demands for global action on climate change.

Its IPCC cannot on the one hand reveal that the costs of human-induced climate change are negligible, then on the other hand wheel out Greta Thunberg to give everyone the extreme guilts.

Climate change politics makes no sense and it is high time politicians started calling out the howling inconsistencies.

Politicians cannot on the one hand condemn the anarchical protest actions of the Extinction Rebellion extremists, but on the other agree with them on “the science”.

It’s time for truth telling. It is time we woke up and realised that continuing to harm our economy and our people is just plain stupid.

Expectations that we can do something to stop warming need to be doused. That the world is not about to end because of warming needs to be shouted from the roof tops.

There is no climate emergency.